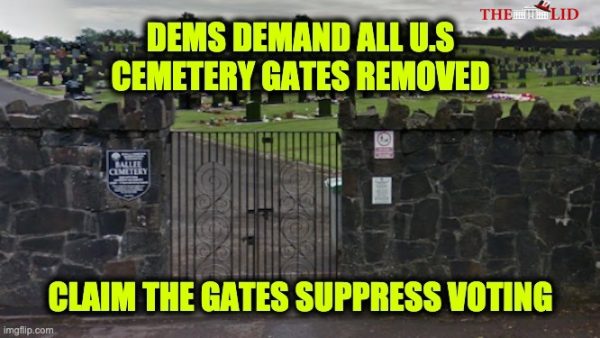 Here’s another story debunking the Democratic Party myth that voter fraud doesn’t exist. Florida elections and law enforcement officials detected an attempt to register dead people to vote in Broward County.  According to the documents, at least fifty-four voter registration applications from dead people were sent to the board of elections,  postmarked from Columbia, South Carolina, with no return address.  register dead democrats

An unknown person in Columbia, S.C., submitted at least 54 new voter applications in July in the same neat handwriting to the Broward elections office, several in each of 19 envelopes. Many of the voters were elderly and had recently died in the Northeast.

Almost all of them were flagged by Broward elections office staff as suspicious and turned over to the Broward State Attorney’s Office. Prosecutors have been watching since August, in a sting operation to catch the culprit, internal correspondence shows.

Gee, I’ve heard that Columbia, S.C. is a nice place to live, but no one ever told me it was heaven.

Apparently, 30 of the fake registrations were verified by the state attorney’s office as being dead. The identities of the rest could not be verified.

Broward County elections spokesman Steven Vancore told Fox News, “Fortunately the system we have in place works, the improper registrations were flagged in a timely manner and the information was turned over to law enforcement for prosecution,” Vancore added. “We are also pleased to inform you that there was no attempt by this person or persons to cast a ballot.”

CBS News added, “Vancore said that Florida allows people to register to vote by mail, but he said the county receives state data about people who have died and marks those individuals in its files as ineligible to vote. Florida requires a valid government ID to actually show up and vote, so Vancore said this scheme ‘only got half the equation’ necessary to vote.”

Timothy Donnelly, an assistant state attorney, wrote in an August letter to Broward’s supervisor of elections, Peter Antonacci, that he had launched an investigation into the applications and that there were “several potential criminal violations.”
Another employee of the state attorney’s office wrote in an October 22 email to Antonacci that the applications appeared to be filled out by one person. “Due to the fact that they were mailed from out of state with no return address, I’m unable to identify the person who submitted these applications,” according to the correspondence shared with CNN.

I wonder if any of the people on the registration applications received a letter from Colombia,  South Carolina before they died informing them that there is early voting in heaven, but they must wear a mask.  Because it can’t be fraud, the Democrats and their sycophants in the MSM say that fraud doesn’t exist.
register dead democrats
https://lidblog.com
Facebook Twitter Flipboard