All Regime Change Is Not The Same 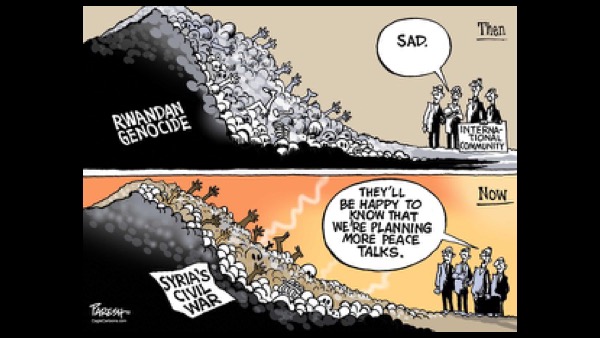 The decision by the Democratic Party platform committee to oppose any U.S. action aimed at “regime change” is a setback for the cause of preventing future genocides.

“Democrats believe the United States should not impose regime change on other countries and reject that as the goal of U.S. policy toward Iran,” the 2020 platform reads.

Many Americans understandably are jittery about trying to change other countries’ governments. They recall the casualties suffered during the U.S. occupation of Iraq, the chaos in Libya following Western intervention, and the triumph of Islamic fundamentalists in Egypt and Gaza after the U.S. pressed for elections there.

Yet there also have been instances in which U.S. intervention successfully ousted a dictator and involved relatively few casualties, such as Grenada in 1983, Panama in 1989, and Haiti in 1994.

Just as Democratic delegates were voting last week to oppose regime change, a trial began 6,000 miles away which reminds us why regime change is sometimes necessary. In the Sudanese capital of Khartoum, the country’s former dictator, Omar al-Bashir, is now standing trial—but not for perpetrating the Darfur genocide.

From 2003 to 2005, Bashir sponsored Arab militias, known as the Janjaweed (Arabic for “devils on horseback”), that slaughtered some 400,000 non-Arab residents of Sudan’s Darfur region. The George W. Bush administration was pitifully slow to recognize that the mass murder was genocide. Deputy Secretary of State Robert Zoellick even circulated absurdly low estimates of the number of victims. The administration saw no American interest in intervening, so it minimized the Darfur genocide to help justify its inaction.

During the 2008 presidential campaign, candidate Barack Obama appropriately chastised the Bush administration for its inadequate response to Darfur. “I won’t turn a blind eye to slaughter” of civilians abroad, he vowed.

Flaunting the indictment, Bashir traveled openly to numerous Arab and African countries. Not only did the U.S. not attempt to capture him, but President Obama refrained from even criticizing those regimes for hosting Bashir—and blocked a congressional attempt to penalize those governments. The U.S. envoy to Sudan, Princeton Lyman, said publicly, “We do not want to see the ouster of the [Bashir] regime, nor regime change.”

Why? Call it the Politics of Genocide. Bashir had important allies. Russia and China were his major arms suppliers.  The Arab League saw his indictment as an anti-Arab conspiracy by Western imperialists. The Obama administration didn’t want to strain its relations with Moscow, Beijing, or the Arab League.

There was a human cost to that U.S. policy. Although the genocide itself ended— because “there are no more villages left to burn,” a UN official explained—sporadic atrocities continued. In 2012, New York Times columnist Nicholas Kristof reported that Bashir was carrying out “mass atrocities that echo Darfur” against non-Arab tribes in Sudan’s Nuba Mountains. Kristof wrote, “I am not only embarrassed by my government’s passivity but outraged by it….We now have the spectacle of a Nobel Peace Prize winner in effect helping to protect [one] of the most odious regimes in the world.”

In the end, Bashir left office, but only after he was forcibly ousted by his opponents, not by any international action. The trial underway in Khartoum concerns only his illegal rise to power in 1989, not the genocide he perpetrated. The new Sudanese government may yet hand him over to the ICC. But the benefits of such a trial before the ICC pale into comparison with what would have been accomplished through early and decisive U.S. action to oust or arrest Bashir. Lives would have been saved—and future mass murderers would have been put on notice.

Extreme isolationism clears the way for oppressors. Recall America’s response when fascism was on the march in the years preceding World War II and the Holocaust. Italy invaded Ethiopia in 1935. Hitler took over the Sa’ar region in 1935 and the Rhineland in early 1936, and undertook a massive, illegal buildup of Germany’s military. The response of the two major American political parties was to stick their heads in the sand. The 1936 Republican platform vowed to stay out of the League of Nations (precursor to the UN) and refrain from “any entangling alliances in foreign affairs.” The Democrats’ platform proclaimed their “opposition to war as an instrument of national policy” and pledged to “observe true neutrality in the disputes of others.”

In the months to follow, Germany bombed Spain to assist Franco’s fascist revolt, and Japan invaded China. There was no straight line from the 1936 U.S. political platforms to developments overseas, but foreign dictators were keenly aware of America’s isolationist consensus and understood they had nothing to fear from Washington.

But times change, attitudes change—and political interests change. The 1996 platform criticized the Republicans for “standing aloof as war and genocide spread throughout the former Yugoslavia,” and praised President Bill Clinton for his airstrikes there and his role in facilitating the changing of regimes in Haiti and South Africa. The 2000 platform continued in that spirit. “America did right in the Balkans, and now we must finish the job” of removing Serbia “from the grip of Slobodan Milosevic,” it vowed. As for Iraq’s Saddam Hussein, “we will work to see him out of power,” the Democrats promised. It even gave this doctrine a name: “Forward Engagement.”

By 2004, however, the president was a Republican and the entire tone of the Democrats’ platform was transformed. “Forward Engagement” disappeared and the new focus was to accuse the Republicans of “rushing to force” and “going it alone” overseas. The Democrats urged a foreign policy based on expanding NATO, embracing UN initiatives, and creating new international agencies and mechanisms.

In 2008, with Bush #43 leaving office, the Democrats’ focus on international alliances was set aside and the question of intervening in a human rights crisis abroad was left up in the air. There was a vague reference to “upholding shared values whenever they are threatened by autocratic practices, coups, human rights abuses, or genocide” and a promise to “champion accountability for genocide,” with no explanation as to how that would be accomplished.

The 2012 platform was something of a hodgepodge, reflecting the views of a president who sometimes condemned U.S. interference and sometimes practiced it. “America will not impose any system of government on another country,” the platform promised, before praising President Obama for “intervening [to] end Muammar Qadhafi’s” brutal reign and pledging to “work to hasten the end of the Assad regime and support a political transition to a stable and democratic Syria.”

The subsequent weakening of the Syria position was a harbinger of things to come. The 2016 platform went from vowing to “hasten Assad’s end” to seeking “a negotiated political transition that ends Assad’s rule.” This year’s platform reduces that go to “finding a political resolution for this horrific war.”

Thus there has been a steady retreat from intervention in recent years—but there is also ample precedent to adopt a “Forward Engagement”-style position on confronting perpetrators of genocide. Or, at a minimum, the architects of this year’s Democratic platform could have simply refrained from endorsing regime change, leaving it to the president to handle the issue on a case-by-case basis.

Instead, pending final approval by the delegates at the convention, they have declared in advance that the United States should never seek to change any regime, and they have singled out the world’s most aggressive rogue regime, Iran, as an example of a government whose existence the U.S. should accept. The platform in effect tells the Iranians they do not have to fear American intervention if they continue sponsoring international terrorism and developing nuclear weapons.

Admittedly, political party platforms are more symbolic than practical. Presidents do not consider themselves bound by them. But platforms are important both as weathervanes and as guideposts. Platforms reflect the mood in the party and can play a role in shaping the party’s future direction on policy. Tolerating genocidal regimes is the wrong direction in which to be going.

Dr. Medoff is founding director of The David S. Wyman Institute for Holocaust Studies (www.WymanInstitute.org) and the author of more than 20 books and several hundred essays about the Holocaust and Jewish history.
https://lidblog.com
Facebook Twitter Flipboard