Will The Dems Call It An Insurrection? 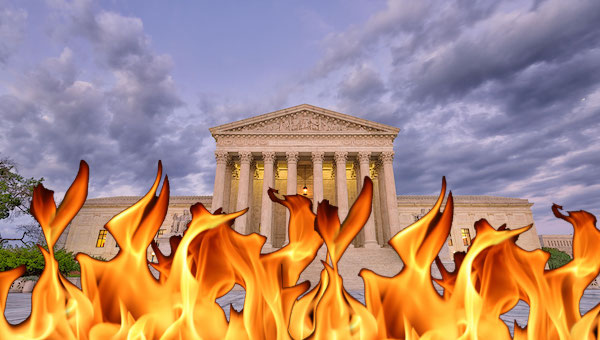 This shows just how dangerous the White House’s ongoing refusal to condemn illegal protests in front of the homes of SCOTUS Justices actually is.

A recent unclassified Department of Homeland Security memo dated May 13 says that pro-abortion activists have made violent threats against Supreme Court Justices, lawmakers, churches, the clergy, and the Supreme Court building itself.

Axios reports, “Law enforcement agencies are investigating social-media threats to burn down or storm the Supreme Court building and murder justices and their clerks and attacks targeting places of worship and abortion clinics.”

The threats came after the leaked draft decision of the Court in the Dobbs v. Jackson Women’s Health Organization case revealing that as of February, the majority of Justices on the Court had decided to overturn Roe v. Wade which has been critiqued on its legal merits by scholars on both sides of the issue since the decision came down in 1973.

The DHS memo states that the threats “are likely to persist and may increase leading up to and following the issuing of the Court’s official ruling.”

Axios mentions that “abortion-related violence historically has been driven by anti-abortion extremists,” but the memo warns that the violence “could” come from pro-abortion activists.

The hell you say!

Do you mean it wouldn’t be the pro-lifers trying to storm the Supreme Court, murder the Justices and clerks, then burn down the building after finally getting the decision they’ve wanted for 49 years?

Actually, that’s not what the memo itself says. They’re still insinuating that pro-lifers would be willing to foment violence because of “white supremacy.” No, really.

The memo states, “Some racially or ethnically motivated violent extremists’ embrace of pro-life narratives may be linked to the perception of wanting to ‘save white children’ and ‘fight white genocide.'”

That is just the biggest load of crap.

Black women are five times more likely to have an abortion than white women. Pro-life advocates are the ones that believe that all black lives matter — even when they’re preborn. If there is a genocide of black Americans, it’s happening in the womb just like Planned Parenthood’s eugenicist founder, Margaret Sanger, had envisioned it.

The DHS memo has an interesting line: “The mere advocacy of political or social positions, political activism, use of strong rhetoric, or generalized philosophic embrace of violent tactics does not constitute violent domestic extremism or illegal activity and is constitutionally protected.”

Oh. Maybe the DHS should send that line over to the AG Garland at the DOJ, who seems to have forgotten this little nugget of truth. The DOJ has been committed to investigating parents who speak up at school board meetings and equating them to domestic terrorists.

It turns out that the more imminent threat is from the violent, pro-abortion zealots than from angry and frustrated parents who don’t like mask mandates. These lockdowns mean more “virtual” learning, CRT hidden in the math curriculum, pornographic literature in the libraries of middle schools, and radical sex and gender ideology taught to their kindergartners. Who knew?

A DHS spokesperson told Axios that the department is “committed to working with our partners across every level of government and the private sector to share timely information and intelligence, prevent all forms of violence, and support law enforcement efforts to keep our communities safe.”

The Biden-Harris admin is committed to “keep our communities safe”?! Is this spokesperson high? This administration is turning a blind eye to the flood of drugs coming across the southern border while CBP is distracted by the thousands of illegal aliens crossing daily; a good chunk of Democrats want to reimagine/defund/abolish the police, and the Vice President pushed a bail fund to let rioters and violent criminals out of jail during the summer of “mostly peaceful” protests.

And despite 18 USC § 1507, which states, “pickets or parades in or near a building housing a court of the United States, or in or near a building or residence occupied or used by such judge, juror, witness, or court officer” are prohibited when done with the intent “of interfering with, obstructing, or impeding the administration of justice,” the White House has refused to condemn the protesters in front of the homes of Supreme Court Justices.

The former Press Secretary said that the White House had no position on protesters posting the home addresses of SCOTUS justices and protesting outside their doors just 3 days after the leak of the draft decision.

Jen Psaki says Biden has no position on pro-abortion activists posting a map of the HOME ADDRESSES of Supreme Court justices pic.twitter.com/MKoDJLr8CW

On May 9, it was pointed out that there is indeed a law against protesting in front of Justices’ homes, but she still won’t condemn it, saying that Americans have a right to peaceful protest.

She also said that the White House “understands the passion” of the pro-abortion zealots and says that they should remain peaceful.

Then on May 10, she has a confusing statement that makes it appear as though the White House is encouraging protests in front of the homes of the conservative Justices.

She was likely saying that the White House was encouraging the “peaceful protests” and not the “outside Justices’ homes” part, but it’s hard to tell from how it was worded.

This disgraceful refusal to condemn what are clearly intimidation tactics of pro-abortion activists hoping to scare at least one Justice to change their decision is typical of this administration and the left’s view of protesting in general — left-wing protests are correct and just and shouldn’t ever be condemned no matter how violent they get, but a right-wing protest (or a Trump rally) is a “threat to democracy” itself.

It’s no surprise to pro-lifers that the same people who are okay with killing innocent children in the womb right up to birth have violent tendencies.

It’s just a surprise that Biden’s DHS admits it in a memo.