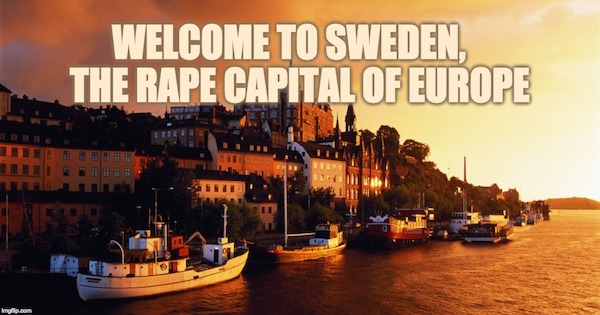 Carlson’s interview was with Ami Horowitz who directed a documentary about Sweden’s migrant-related increase in violent crime.

The MSM as expected is casting darkness upon Trump’s statement. They are looking for a non-existent terrorist attack and ripping the president because they can’t find one.  But the Tucker Carlson segment wasn’t talking about one major terror attack, it was talking about Sweden’s increase in violent crime, particularly rapes. In fact, Sweden has become the rape capital of Europe. 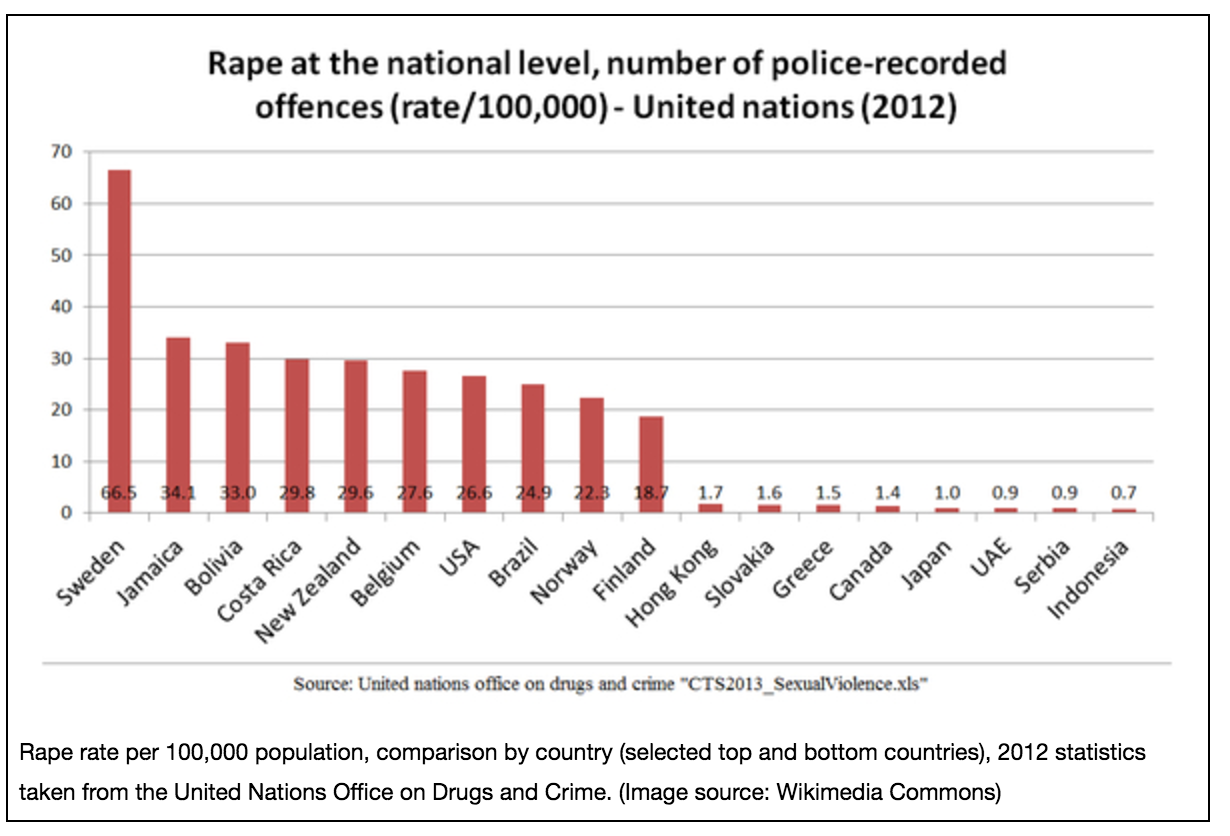 The Gatestone Institute’s Ingrid Carlqvist reports that forty years after the Swedish parliament unanimously decided to change the formerly homogenous Sweden into a multicultural country, violent rapes are up by almost 1,500%. In 1975, 421 rapes were reported to the police; in 2014, it was 6,620. That is an increase of 1,472%. Ms. Carlqvist suggests the increase of rapes is attributable to the mass influx of immigrants, coming mainly from Muslim countries such as Iraq, Syria and Somalia. Over the past 10-15 years, immigrants to Sweden have arrived mainly from Muslim countries such as Iraq, Syria and Somalia. It can’t be totally confirmed that it was these Muslim immigrants because the very P.C. Swedish law forbids registration based on people’s ancestry or religion however, the growth rapes have coincided with the growth of Muslim immigrants.

Carlqvist created a video about the immigrant/rapist problem which was initially banned by Facebook. The video  is an updated version of a research paper published by Gatestone in February of 2015 which, based on quantitative research, speculated the increase in rapes was attributable to the arrival of large blocks of refugees from Islamist countries.  While Sweden itself doesn’t allow the collection of ethic information from criminals, Ingrid Carlqvist uses other related data in an attempt to link the two.  The video is scholarly, not sensationalist in tone.

Sweden’s recent population growth is without parallel. Never before in the country’s history has the number of inhabitants increased so fast. Sweden is now the fastest growing country in Europe.

Over the past 10-15 years, immigrants have mainly come from Muslim countries such as Iraq, Syria and Somalia. Might this mass influx explain Sweden’s rape explosion? It is difficult to give a precise answer, because Swedish law forbids registration based on people’s ancestry or religion. One possible explanation is that, on average, people from the Middle East have a vastly different view of women and sex than Scandinavians have. And despite the attempts by the Swedish establishment to convince the population that everyone setting foot on Swedish soil becomes exactly like those who have lived here for dozens of generations, facts point in an altogether different direction.

The 2016 version of Sweden’s annual “Party in the Park Festival” saw 35 different women (as young as 12) reported being sexually assaulted by “foreign youths.”  Note: ‘foreign youths” is the pc way the Swedes describe their Muslim migrants

One of the victims 17-year old Alexandra Larson recounted her terrifying experience of being sexually attacked during the festival to the UK Daily Mail Online.  The apparent perpetrators were “foreigners” who may have been from a nearby asylum center (that’s British for a refugee or homeless shelter). The victims reported being kissed, groped, and verbally harassed by men who they believed to likely be immigrants.

“’Everything was okay at the beginning of the evening. But things got out of hand during the last concert… when I felt the first touch against my bottom.

‘Then someone took the liberty of grabbing my butt really hard. I turned away and said to the group of boys behind us that this was not okay, but I did not know who had done it. After a while, I felt someone running his fingers between my legs touching my genitals. Luckily, I had jeans on me

‘It was creepy. Someone stood around me and groped me and I had no idea who it was. It was sick…

‘The groping was at first a bit innocent. Just a touch on the bottom. Something that you can do by mistake in a big crowd of people. But it became worse and worse after that. The one touching me was becoming more and more rough every time…

‘I have reported this to the police, but it feels like a drop in the ocean. I saw girls that came crying from the audience, including an old childhood friend who is two years younger. She cried so much that it broke my heart…”

Along with the violations on her body by the “foreigners,” the 17-year-old Larson said she saw “girls crying everywhere” as she left the festival, and police have corroborated her story, saying that they know of at least 35 separate sexual assaults that took place during and after the festival.

Sweden is not the only country facing an increase in crime generated by their increase in Muslim immigrants. According to the Gatestone Institute Germany’s streets have descended into lawlessness. “During the first six months of 2016, migrants committed 142,500 crimes, according to the Federal Criminal Police Office. This is equivalent to 780 crimes committed by migrants every day, an increase of nearly 40% over 2015. The data includes only those crimes in which a suspect has been caught.”

Chancellor Angela Merkel faces defeat in her reelection bid due to her refugee policies (about 1.1 million entered Germany in 2015)

A poll released Friday found Merkel’s Social Democrat opponent, Martin Schulz, took the lead among potential Germany voters. Forty-nine percent of Germans polled preferred Schulz based on a direct leadership vote, according to the poll, which was carried out by Forschungsgruppe Wahlen for broadcaster ZDF. Only 38 percent of those polled chose Merkel — an 11 point difference. This is a remarkable switch compared to the end of January, when the same poll showed Merkel leading 44 percent to Schulz’s 40 percent.

Our politically correct MSM avoids talking about the criminal refugee issue in countries like Sweden and Germany which is why they refuse to understand what President Trump meant when he said look at what’s happening in Sweden. The increase in crime is the result of the unfettered flow of refugees into the country.  President Trump was trying to avoid the issues found in Sweden, Germany and similar countries with his extreme vetting executive order struck down in Seattle. Hopefully the Executive Order Trump has promised to issue this week will be acceptable to the courts and prevent criminally oriented migrants from coming into the country.

The video below is Ami Horowitz’s ten minute documentary about violent crime in Sweden tied to the migrant population that led to his appearance on Tucker Carlson’s show.