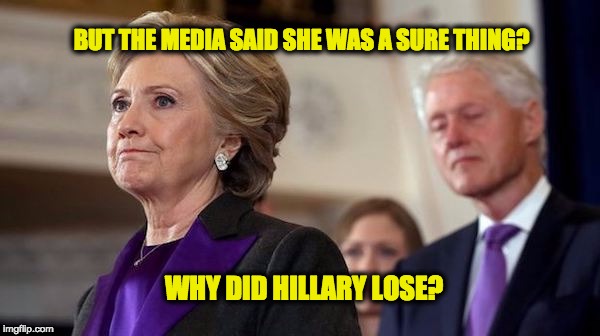 How many reasons can those Democrats come up with? What’s the real reason Hillary lost? The Dems will tell you it was Comey or the Russians, or Wikileaks, or the fact that she is a woman.  Then they’ll exclaim that their hero won the popular vote anyway.  Rational commentators will tell you that Donald Trump had a better message, cared about the average voter and that Clinton didn’t campaign in the rust belt states, like Ohio, Michigan, and Wisconsin.

Then there are the ones that no one is discussing such as,  what if all of Alderaan was going to vote for her but that evil Darth Vader blew the planet up? The pundits say that voters didn’t want Obama to have a third but what if it wasn’t that?  What if Hillary lost because the White House interns didn’t want former President Bubba to have a third term?  Or Maybe she lost because a hobbit came into her house and stole her precious ring?

Do you agree with any of these or others?

The Lid invites you to give your opinion….the Poll below gives you 32 different possible real reasons why Hillary lost. Pick your favorite. Or if you hate all 32 reasons provided– come up with your own… write your favorite reason in the comments and it will be counted.

The poll ends Monday @ Noon-results will be published later that day.

Let the world know what you think

The Dems keep giving different reasons for Hillary Clinton Losing The 2016 Election…what do YOU think. Pick one … in The Lid Blog’s Hangs on LockerDome
Facebook Twitter Flipboard