How Can Anybody Vote For This Hater? 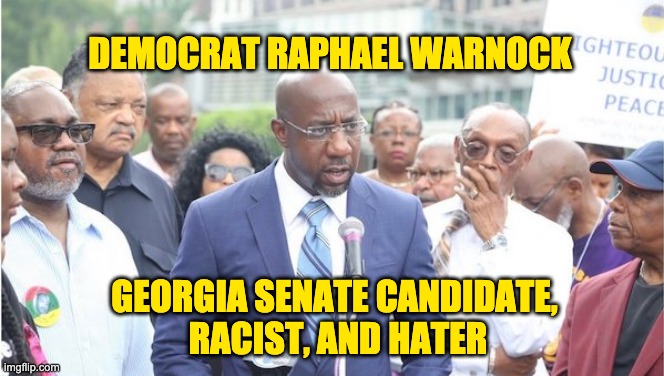 This afternoon, The Washington Free Beacon reported that in 2011, Warnock preached that Americans cannot serve God while also serving in the U.S. military.

“America, nobody can serve God and the military,” Warnock said in the sermon delivered at Ebenezer Baptist Church in Atlanta, where he serves as senior pastor. “You can’t serve God and money. You cannot serve God and mammon at the same time.”

For those keeping score:

Not to be outdone, in the wake of the violence this past weekend directed at President Trump’s supporters, Georgia Democrat and human cash incinerator Jon Ossoff’s empty comments to “heal our nation’s soul” look even more out of touch from a candidate who has previously said, “We need to send a message that if you indulge this kind of politics, you’re not just going to get beaten. You’re going to get beaten so bad that you can never run or show your face again in public.”

While California liberals descend on Georgia with their elitist and offensive views to support far-left radicals like Warnock and Ossoff, Republican Senators David Perdue and Kelly Loeffler will always defend patriotic American values.

On the other hand, people like Georgia Democrat Raphael Warnock should not be in public office. Warnock is a hater who only serves to increase the divide in an America that is already too polarized.