Was Rand Paul ‘Wiretapped’ by The Obama Administration ? 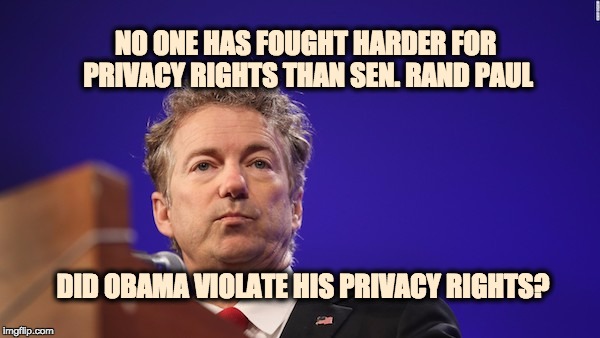 If it had been revealed that Obama was ‘incidentally’ surveilled during his first presidential campaign by the Bush administration, no amount of legal gymnastics would have justified it in the eyes of liberals. They are, after all, all about civil liberties. It wouldn’t have mattered in that hypothetical scenario that only the communications of foreign entities were being monitored, that Obama was only ‘incidentally’ picked up since he wasn’t the actual target, and that his identity was only ‘unmasked’ for ‘national security’ purposes. Liberals would have been outraged, because to them, it would have been nothing less than warrantless wiretapping.

But you take that same exact scenario and change some of the characters so that it’s the Obama administration doing the surveillance on an incoming president, and liberals don’t think anything about it. They’ll laugh at Trump’s word choice of ‘wiretapping’ – he even put the word in quotes, suggesting a nonspecific form of surveillance – instead of looking at the big picture.

It doesn’t matter that it was ‘incidental,’ that Trump himself wasn’t necessarily the actual target, or the fact that Susan Rice requested the identities of members of Trump’s campaign to be ‘unmasked’ for ‘national security’ reasons. The point is that all that can be done relatively easily on any American, with little to no probable cause to justify a [secret] FISA warrant, and with nothing more than a request from a higher-up official. Oh, and it’s perfectly ‘legal.’

That is the point. And that’s been Senator Rand Paul’s (R-KY) position ever since Trump brought the whole thing up.

Now, Rand Paul wants to know if he was under any surveillance from the previous administration, regardless of whether the surveillance was ‘incidental’ or ‘legal.’ The question is, ‘Should it be legal?’ Here’s The Hill:

Sen. Rand Paul (R-Kent.) says he has asked the intelligence community and White House for any evidence that he was surveilled by President Obama.

I have formally requested from the WH and the Intel Committees info on whether I was surveilled by Obama admin and or the Intel community!

Paul tweeted Friday that “I have formally requested from the WH and the Intel Committees info on whether I was surveilled by Obama admin and or the Intel community!”

The tweet appears to build off of President Trump’s claim, presented without evidence, that the Obama administration wiretapped Trump Tower during the campaign.

It is not immediately clear if Paul is referring to conventional surveillance, where Paul would have to have been the subject of a court-issued warrant, or having his name “unmasked” in files if he was incidentally collected from surveillance targeting someone else.

But Paul’s previous two tweets implied that Paul feels he was surveilled during the campaign.

“Did the Obama admin go after presidential candidates, members of Congress, journalists, clergy, lawyers, fed judges? Did the Obama admin use warrantless ‘wiretapping’ on other candidates besides @realDonaldTrump?” he wrote in two tweets linking to a story about the news organization Circa requesting documents about unmasked intercepts.

Paul has argued that incidental collection of Trump associates calls with foreign citizens who were themselves under surveillance is “a big deal.”

Paul and many civil libertarians argue that, since foreign surveillance requires no warrant, Americans caught up in that surveillance are being observed without a warrant.

Foreign, warrantless surveillance is authorized under section 702 of the Foreign Intelligence Surveillance Act, which comes up for renewal later this year. Comey has described 702 as the “crown jewels” of FBI surveillance tools.

If Senator Paul was wiretapped it would be most ironic as no one in government has fought harder than Rand Paul to guarantee that our privacy rights were protected. Now that his 4th Amendment rights may have been violated he will fight even harder.