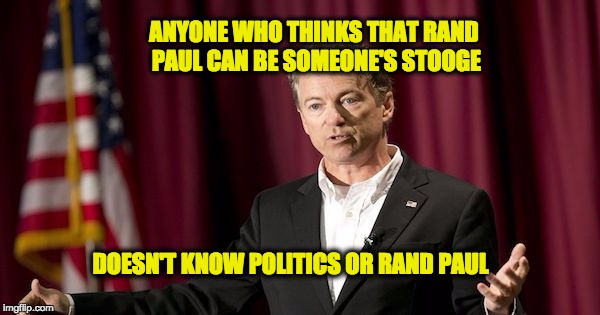 Senator Rand Paul (R-KY) seemed amused but otherwise unfazed by New York Magazine’s characterizing him as Donald Trump’s ‘most loyal stooge.’ “Haters are gonna hate,” Paul said with smirk. There’s a long list of things one can say about Paul, but there is no way the word stooge should be on that list.. We are talking about a man who did a filibuster the old fashioned way….he stood up and started talking and kept talking for thirteen hours.

Steve Doocy of Fox & Friends said that it was just ‘clickbait,’ and that he clicked on it, so they got what they wanted:

The junior senator from Kentucky, and onetime hope of the extremely short-lived “libertarian moment” in American politics, has not only attached himself to Trump, but is actively snuffing out whatever faint stirrings of opposition his colleagues can muster.

While the GOP Congress has ignored the president’s self-enrichment, refusal to disclose his tax returns, and clear violations of the Constitution’s Emoluments Clause, some have expressed willingness to investigate his opaque ties to Russia. Paul is not one of them. And not only does he see no need for investigation on Russia, Paul has staked out a stance against any investigations, period, on the brutally frank grounds that it would impair the party’s legislative agenda. “I just don’t think it’s useful to be doing investigation after investigation, particularly of your own party,” he told “Kilmeade and Friends.” “We’ll never even get started with doing the things we need to do, like repealing Obamacare, if we’re spending our whole time having Republicans investigate Republicans.”

Many Republicans have made piecemeal excuses not to exercise the oversight function. Only Paul has elevated the practice of looking away from the crimes of the Executive branch to an actual principle of governance.

The conversation shifted to Obamacare. The Senator – unlike his party’s leadership – is still intent on fully repealing the Affordable Care Act and not replacing it with another ‘government program.’ It does need to be replaced, according to Paul, but with ‘market reforms’ designed to get healthcare costs to come down.

Paul mentioned that the ‘death spiral’ that Obamacare is in right now is caused by the idea that pre-existing conditions must be covered by insurance companies. So, the market ends up being flooded with people who are already sick, which drives costs way up, because the young and healthy aren’t buying insurance. The insurance market depends on healthy people paying premiums.

See the interview below for some of Paul’s solutions:

Parts of this post was originally seen at Eagle Rising