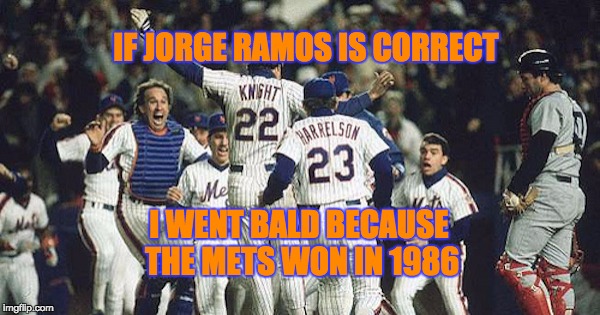 This one goes down in the annuls of dumb things said by left-wing news people. Univision news host Jorge Ramos was a guest on FNC’s Sean Hannity show on and claimed that since crime has gone way down in the past 26 years and illegal immigration has gone way up, then it means that illegal immigration reduces crime. Using that logic, the NY Mets won the World Series in 1986, I started going bald in 1986. Using Mr. Ramos’ explanation, I lost my hair because the Mets were world champions (if that is the case it was well worth it).

On Hannity,  Ramos cited a FBI statistic that showed that since 1990, the national crime rate has dropped by 48 percent. And during that same time period, the number of illegal immigrants tripled. He concluded then, “Thanks to immigrants, crime is going down in this country.” See? Just like the Mets and my hair!

I think that might be a case of post hoc ergo propter hoc (erroneously assuming a relationship). There are many factors involved in why crime rates go up or down. Picking one factor like illegal immigration and pointing to it as the reason crime went down is like saying crime went down because carbon emissions increased during the same time period.

Sean Hannity interviewed Jorge Ramos and challenged him on the issue of criminal illegal aliens and what should be done with them. Fox News reported:

“You say, ‘This isn’t the America I know.’ Well, what America do you know?” Hannity said. “Where people break the law? That people don’t respect American sovereignty? That Americans – some of them – lose their children, just because you define compassion as open borders?”

Hannity further pressed Ramos on Trump’s policy of “extreme vetting” for any refugees seeking asylum in the U.S.

“Do you support extreme vetting to protect Americans and not gamble with their lives?” Hannity asked.

How do you think he answered? You are right but you might want to watch the two videos below which cover the full segment.

Can you imagine that? Neither one of them brought up the NY Mets–>Baldness connection.