Snowflakes Will Be Upset 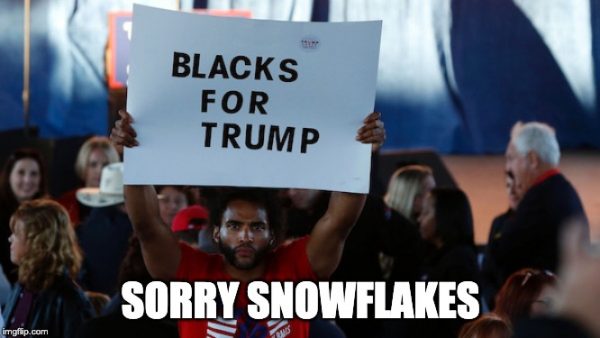 Oh boy, this is going to upset the liberal snowflakes. Per a new Gallup poll, satisfaction with race relations and the “position” of minorities under Trump are far higher than they were under President Barack Obama, the nation’s first black president. Let me put it a different way, race relations are perceived to be better under Trump than Obama.  Please stop crying liberals.

According to Gallup, the areas were Americans’ satisfaction grew in the past three years include the obvious, the economy, security from terrorists, and military preparedness. But under those are race relations which advanced 14 points, from 22% at the end of the Obama administration to 36% this month,  and two below that the position of blacks and other racial minorities in the nation” jumped 9 points, from 37% in January 2017 to 46% today.

There are areas where Americans are less satisfied, thanks to the liberal propaganda. Americans have grown less satisfied with three issues: abortion (down 7 points), the level of immigration (-6), and the environment (-6). All three are issues where conservatives agree with President Trump.

Americans’ average satisfaction rating for the 27 issues Gallup has tracked consistently since 2001 is now 47%. This is up to three points from a year ago and is the highest since the January 2005 poll.

Wait a second 2005 that during the Bush #43 administration before Obama moved into the Oval Office. Oh, those poor snowflakes must be in so much pain.

“Today’s average satisfaction is roughly on par with the level of the early 2000s. Only in 2002 was the average for this metric substantially higher than it is today. The average 53% recorded that year reflected heightened satisfaction as Americans were in full ‘rally around the flag’ mode shortly after the 9/11 attacks.”

Gee, but after Obama began his second term, American’s satisfaction went down the toilet. Not surprising, though, he was a lousy President. That’s why Donald Trump got elected. And Americans’ satisfaction is increasing because Donald Trump is a great president..well, that opinion is void if one is a snowflake.