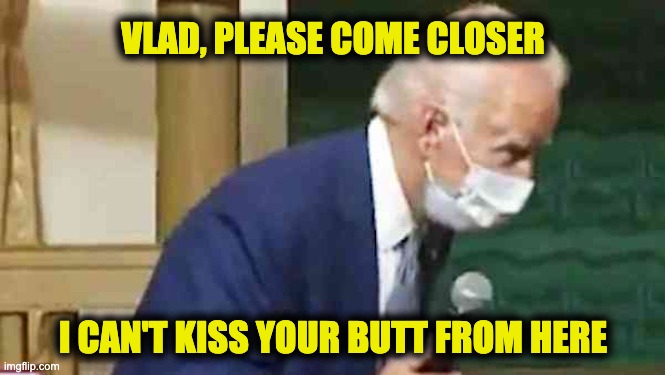 When Trump was in office, he knew which thumbscrews would get the attention of his friends and his foes, instincts honed from a lifetime of billion-dollar negotiations. Joe? Not so much. Putin’s puppy

Unlike Presidents before him, Trump was slow to deploy military assets (except against known terrorist entities like ISIS, Al Baghdadi, and Solemani.) Even his pressure on containing Iran favored the use of non-lethal economic might.

During the debate, Joe lobbed now dis-proven media lies at Trump, and thumped his chest about how 45 was really ‘Putin’s Puppy’ and Joe was going to breeze into Moscow and show him what a real tough guy looks like.

But Joe doesn’t seem to be doing very much deterring. How else do you explain him doing nothing about Russia giving Iran a spy satellite to use against Israel who they call the little Satan and America the big Satan.

Russia is preparing to provide Iran with an advanced satellite that would enable it to track potential military targets across the Middle East, the Washington Post reported on Thursday.
The satellite is projected to have the ability to track long-range targets, including IDF bases, as well as oil refineries throughout the Persian Gulf and Iraqi bases for US troops.

…The satellite would allow “continuous monitoring of facilities ranging from Persian Gulf oil refineries and Israeli military bases to Iraqi barracks that house US troops,” said the paper, which cited three unnamed sources – a current and a former US official and a senior Middle Eastern government official briefed on the sale.

…While the Kanopus-V is marketed for civilian use, leaders of Iran’s Islamic Revolutionary Guards Corps have made several trips to Russia since 2018 to help negotiate the agreement, the Post said.
Russian experts traveled to Iran this spring to help train crews who would operate the satellite from a newly built facility near Karaj west of Tehran, it added.

A nation that regularly gathers in the streets to chant ‘death to America’ and ‘death to Israel’ has a spy satellite to track our allies’ movements? What could possibly go wrong?

How exactly has tough guy Joe put Putin in his place over this?

So far, he’s given Moscow pretty much everything they’ve wanted. By abandoning American energy superpower status, he is making America (and her allies) MORE dependant on various tinpot tyrants who use energy revenue to prop up their regimes. By removing sanctions limiting the completion of Russia’s Nordstream pipeline to Europe with the flick of a pen, he has awarded Russia MORE revenue and (more importantly) LEVERAGE over Europe who will be afraid to freeze in the dark if he cuts supplies in the Winter as Russia once did before.

Does this sound like Joe is someone who strikes fear into the heart of Russia?

Putin said, “Well, even now, I believe that former U.S. president Mr. Trump is an extraordinary individual, talented individual. Otherwise, he would not have become U.S. president. He is a colorful individual. You may like him or not. And, but he didn’t come from the U.S. establishment. He had not been part of big-time politics before, and some like it, some don’t like it, but that is a fact.”

He added, “President Biden, of course, is radically different from Trump because President Biden is a career man. He has spent virtually his entire adulthood in politics. Just think of the number of years he spent in the Senate. That’s a different kind of person, and it is my great hope that, yes, there are some advantages, some disadvantages, but there will not be any impulse-based movements on behalf of the sitting U.S. president.”

Meanwhile, what is Joe doing in his super-important negotiations with Iran? Like Obama before him, he is engaged in the pre-emptive surrender of America’s negotiating leverage. Because it’s always better to negotiate for your country’s interests from a position of weakness… when you don’t actually believe in those interests.

The economic sanctions lifted by the Treasury Department are of minor irritation to Tehran. They lifted sanctions on some officials of the Iranian state oil company and several other companies involved in shipping and trading petrochemical products.

But the timing of the announcement should raise a few eyebrows. Iran will hold a presidential election in a couple of weeks, and it could be that Biden is trying to strengthen the “moderate” forces in Iran ahead of the vote.

Otherwise, it’s just a complete cave-in to the terrorists, who have been demanding that sanctions be lifted before any progress is made in Iran and the U.S. rejoins the 2015 nuclear deal.

…It’s doubtful Iran will reciprocate. They don’t have to. As long as Biden is lifting sanctions while Iran gives nothing in return, wouldn’t you wait to see what else he’ll give away if you were Iran?

Trump was never Putin’s puppy. Biden on the other hand? Among our enemies, he’s quickly showing himself to be everybody’s bitch. And among our friends, it’s not much better.

It would be amusing if there weren’t so much at stake.