Putin says “I am Not a Woman, so I Don’t have Bad Days” 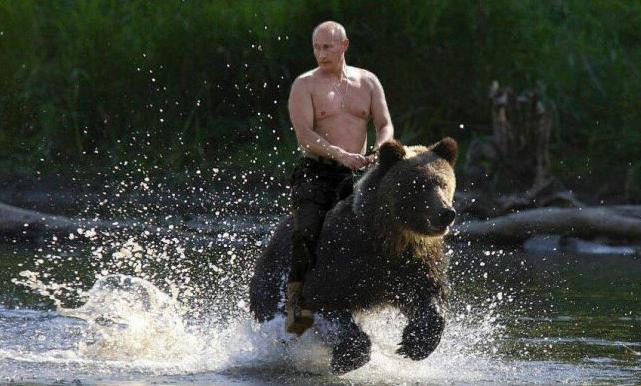 Russia has pushed itself to the forefront of global politics in recent months, at the behest of their absurd leader Vladimir Putin.

The overtly masculine Russian President has become much like a caricature of himself as the years go on, continuously rebranding his particular style of machismo in ever-increasing ways.  One could speculate all they want about what this obvious overcompensation truly means for Putin the man, as opposed to Putin the leader, but that particular foray into wonderment is more than many of us could stomach.

On the world’s stage, however, that has made Putin a bit of a liability.  The man simply refuses to allow himself to lose at anything, and that creates a bit of danger in dealing with him and the Kremlin.  In his quest to suppress all who are simply not himself, Vladimir Putin has made one of the crudest and most incendiary remarks we’ve heard in a long time.

“While speaking to filmmaker Oliver Stone for a documentary titled The Putin Interviews, Russian President Vladimir Putin, 64, said he doesn’t have bad days because he’s ‘not a woman.’

“In a released clip of the interview, Stone asked Putin if he ever has ‘off days.’

“‘I am not a woman, so I don’t have bad days,’ answered the Russian leader. ‘I am not trying to insult anyone. That’s just the nature of things. There are certain natural cycles.’

“Putin further bragged of his masculinity, which is usual for the Russian strongman.

“‘Elsewhere, Putin is shown indulging his now-familiar passion for playing ice hockey, and flexing his muscles on an exercise machine,’ said Bloomberg of the released clips. ‘He told Stone that he lifts weights and then swims every day. Putin’s also seen feeding carrots to a thoroughbred horse named after Dutch theoretical physicist Johannes Diderik van der Waals at his residence.'”

Putin has been a bit of a thorn in the side of worldwide politics in recent years, leaving his mark on global elections, trade agreements, the war on terrorism, and other subjects.  Most recently, Putin has been critical of the Unites States’ decision to bomb Sharyat airfield in Syria after a deadly chemical weapons attack originated from the location.  Putin is propping up Syrian President Bashar al-Assad in his fight against ISIS in the middle eastern nation, but has been accused by the Pentagon of possible complicity in some of Assad’s more heinous war crimes.

Also, this weeks marks the beginning of a congressional probe into possible Russian interference in the U.S. election, specifically to determine whether or not President Donald Trump attempted to shut down an investigation by former FBI Director James Comey.