If There Wasn't Jewish Unity In Ancient Persia, The Purim Story Would Be Told On Tisha B'av 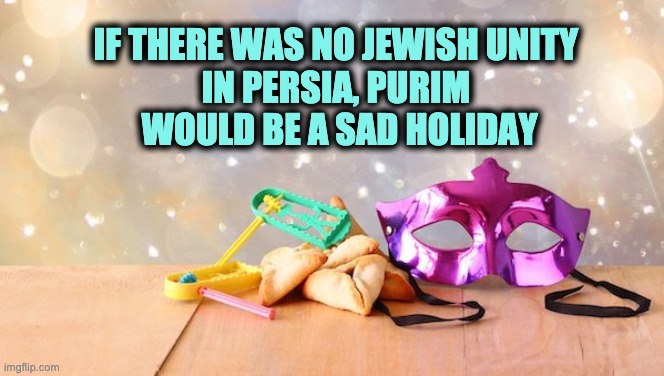 Purim is a holiday of Jewish unity. Purim should have been a day of eulogy, tragedy, and another sad story of betrayal and extermination of Jews. But, in truth, it could never have been made possible without the incredible display of both unity and organization.

The Purim story starts with King Ahasuerus’s feast. History verifies that when he displayed his riches and had a six-month festival, it was also a strategy session for his impending invasion of Greece. Secular history tells us that he began the invasion soon after this party, in 481 BCE. Many Jews, who were still living in Persia, decided to attend the party, despite the Temple vessels’ use from conquered Jerusalem as part of the celebration. So, here we have the defeatists and the apologists. Four long generations past the First Temple’s destruction showed the decayed state of many of the Jews who lived in Persia.

Mordechai certainly broke any mold of traditional Jewish heroes. He displayed many Machiavellian-like traits. Mordechai was both smart and cunning. Utilizing his close relative, Esther, as a pawn, in a gambit to ensure that Jews had access to the king is one example. He knew her beauty would dazzle and win over the Ahasuerus. Another illustration of Mordechai’s unconventional approach was how he compelled Esther to hide her Jewishness.

Esther, rightfully scared, seemed indecisive when Mordechai asked her to petition Ahasuerus. She displayed incredible heroism by making the decision to risk her life to petition the king. This was captured in the tense climax when Mordechai stated, “think not with yourself that you shall escape in the king’s house, more than all the Jews. For if you altogether hold your peace at this time, then will relief and deliverance arise to the Jews from another place, but you and your father’s house will perish” (Esther 4:13,14). Mordechai used strong words to persuade Esther to do her part and get involved.

Equally amazing was Esther’s ability to know what to do next. Esther took charge and developed a plan to work directly with all the Jews in the community. Through Mordechai, she appealed to all Jews, regardless of class. She didn’t ask for an assembly of rabbis or elders, she did not request that a committee be formed to deal with the issue. There was simply no time.

She directly appealed to the Jewish community and used her authority as the highest-ranking Jew in the royal court to petition all Jews to fast for three days and nights. Fasting also implies prayer here. Esther asked for the Jews of Shushan to come together in fasting and prayer to help beg God to favor her efforts. Rather than dismissing her request, the miraculous happened: The Jews of Shushan fasted and prayed together on behalf of the nation of Israel.

Finally, when the drama had played out, the Jews were given permission to defend themselves. The Jews banded together, and it should be noted, the megillah mentions the effects of self-defense. 300 would-be attackers were killed in Shushan, and in the king’s provinces, they killed a staggering 75,000 more! There was no debate if they should not do this! There was no looking for help from among righteous gentiles! There was simply massive action!

Self-defense means killing for survival. Defending oneself takes time and practice. That the Jews were able to defend themselves is only mentioned in two verses of the entire megillah, but it might as well have been a whole separate book dedicated to this achievement. Jews had to first have a consensus that fighting was necessary. The shared value of defending oneself successfully had to have been firmly established. Weapons had to be acquired. It also meant that to defend themselves, they had to have proper training in fighting with both swords and other available weapons of the time. This story could have ended in tragedy, but because of the unity over self-defense, the Jews saved themselves.

I WONDER what kind of preparation had to be developed and put in place, in the years before, to train Jews in how to defend themselves? These Jews were able to assemble a fighting organization in a noticeably short time frame. The amount of training, coordination, and working together is what is also utterly amazing. This undertaking had to have the consent of many Jews, and an agreement must have been in place to make sure Jews would have a sizable enough group of defenders to defeat the threat. To gather like this had to require prior careful planning and consensus.

The greatest miracle of Purim was the level of Jewish unity displayed throughout the dark days before their salvation. Was it because Jews were willing to unify for their survival that God’s hidden hand was activated to overturn this grave danger? What could have been the biggest massacre of Jewish people since the First Temple’s destruction turned out to be truly a miracle on many levels!

As we look at today’s sad affairs of growing extremism and the unprecedented upheaval of political institutions and social conventions, frustratingly, we, as Jews, have not done enough to unify ourselves. Could the miracle of Purim happen today? With the tragic division among the streams of Jews, the apathy, and the insistence of putting partisan social concerns over Jewish communal issues, unfortunately, the answer may be a resounding no! Jews today remain so divided that they almost certainly would not allow for the type of unity displayed in the times of the Purim miracle.

We should learn from Purim that respect for one another as Jews is critically important for our survival. We must learn how to prevent future attacks like the tragedy which shook us to our core when the Pittsburgh synagogue mass shooting occurred in 2018. How much good could be gleaned by harnessing the power of the now separate communities working together on pressing issues of the Jewish community? Education? Alcoholism? Outreach between the streams of our faith? Could we give up some of our personal “kosherness,” accept the people who practice the faith differently than we might, and improve these bonds of unity?

This Purim, reach out to another Jew of any denomination and create a connection. We, as a Jewish nation have been dysfunctional for far too long. We have so much we could do together that could benefit us all, regardless of orientation, especially now, in these dangerous times in which we live. Purim is about the hidden miracle. But that miracle never would have been able to occur had the Jews of that time remained fragmented. Let us use Purim’s underlying message of unity to transform ourselves and heal our divided nation.

This article was first seen in the Jerusalem Post.
vvv
Joshua Goldstein is chairman of Herut North America’s US Division. Herut is an international movement for Zionist pride and education. In 2020, Goldstein was a delegate to the 38th World Zionist Congress for Herut. Herut’s website is https://herutna.org/
vvv
A better understanding of Zionism is one way to improve Jewish unity, and Herut is the place to gain that understanding. Herut is an international movement for Zionist pride and education. It is dedicated to the ideals of pre-World War Two Zionist leader Ze’ev Jabotinsky. Jeff Dunetz (The Lid) is an active member of the organization –Please consider joining me in this great organization at this link.
vvv
For more about Purim, enjoy these recent posts:
vvv