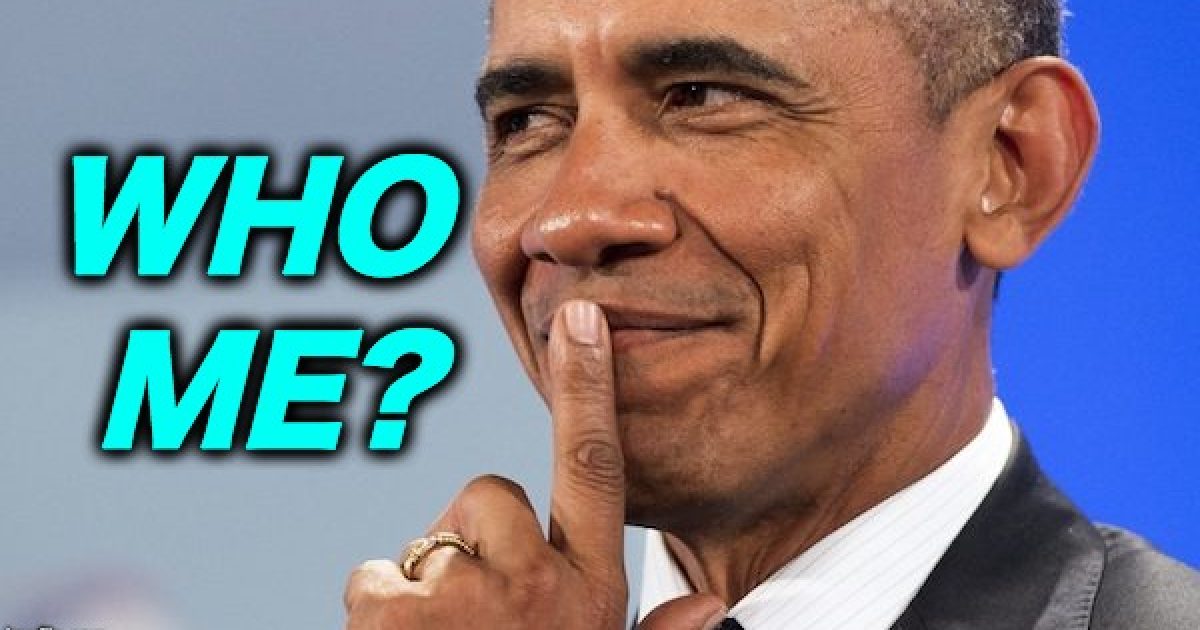 Think about this: If a Republican president named Barack Obama had ordered his FBI to send spies into the campaign of a Democrat candidate for President named Donald Trump, the media today would be erupting in proclamations that this is worse than Watergate…

And they’d be right. But, the fact is, this “worse than Watergate” point is right with the situation precisely as it exists, too. That it was a Democrat president who spied on the campaign of a Republican is an outrageous abuse of presidential powers. But, naturally, the media is silent since it was a Democrat who caused this crime.

In fact, not only is the media falling all over itself to avoid equating this crime to Watergate, the press have entirely excised Barack Obama’s name from this story. Indeed, according to the Wall Street Journal’s James Freeman, Obama had to know that his FBI and intelligence agencies were spying on Trump’s campaign.

Yet, the media has decided that its hero, Barack Obama, is guilt free because… well, not because he’s innocent of anything, but merely because the media doesn’t want him to be brought to justice. Again, it is quite unlike how the media would be reacting if Obama was a Republican and had taken these illegal actions.

So, why did the corrupt U.S. intelligence and policing establishment think they could get away with all this? The truth is, the liberal intelligentsia all assumed that Hillary Clinton could not possibly lose the 2016 election against Donald Trump and the Clintons were just one of the many liberals who were behind this law-breaking action.

The text messages exchanged between rogue FBI agent Peter Strzok and his mistress Lisa Page proved that a cabal was in the works when they talked of the “insurance policy” to prevent Donald Trump’s election.

This cabal of corrupt Obama officials also expected that their perfidy would just be swept under the rug once Hilary won and no one would be the wiser for their actions because nothing they did would ever see the light of day. After all, a Hillary Clinton regime would never expose their illegal work, and the compliant media would indeed not be interested in proving their own crimes. They wouldn’t want to help make Hillary and Obama look bad nor would they want to be part of anything that could even lead to their prosecution.

But, then Trump won the election and surprised them all. And with Trump’s win, the Obama/Hillary/FBI cabal began to worry that a Donald Trump administration could start looking into their crimes and the jig could be up. So, to further protect themselves, this cabal of insider crooks launched this fake Robert Mueller investigation into the “Russia collusion” that never happened.

Every single American — no matter their political leanings –should be worried about this act of illegal political espionage perpetrated by people at the highest levels. After all, if Obama can get away with it and face no repercussions at all, how many future presidents will try the same gambit? Soon we will have no law at all.

But it wasn’t just Obama, here, either. It was the whole of the upper echelon of our intelligence services that engaged in this deception.

Recently Fox Business Host Maria Bartiromo noted that Obama‘s entire administration — his Justice Department, FBI, IRS and his CIA — “were all involved in trying to take down Donald Trump.”

Fox News chief judicial analyst Andrew Napolitano was on Bartiromo’s Fox Business show to discuss reports that the FBI had an informant speak to members of the Trump campaign in 2016 as part of an investigation into Russian interference in the U.S. election.

Napolitano said that “we may be on precipice of exposing a very, very extraordinary political use of intelligence and law enforcement by the Obama Administration,” but hedged by noting there is a low threshold for what warrants an investigation.

“But this is very different Judge, this is a major presidential election,” Bartiromo replied. “President Obama, basically, what it appears to me, politicizing all of his agencies. The DOJ, the FBI, the IRS, the CIA — they were all involved in trying to take down Donald Trump.”

The media are no prize in this business, either. Indeed, as DC Whispers noted, one of the New York Times’ Democrat stenos posing as a journalist who recently claimed that the FBI was actually trying to help Trump by spying on him, also has a rather cozy relationship with Robert Mueller.

And we expect these people to be honest with their “reporting”? Sure we do.

That last whopper by the Times’ Asha Rangappa is quite the trick of prestidigitation, too. She was able to turn the FBI’s illegal spying on a political opponent into something done for his own good. That takes some kind of mental pretzel work, for sure.

In any case, the whole situation is likely coming to a head. It has gotten so bad that no less a man than former Bush U.S. Attorney General Michael B. Mukasey has finally been forced to publish an op-ed saying that Mueller’s investigation needs to be canceled

Mukasey pointed out in his May 20 editorial that Mueller’s investigation broke the law before it even got underway.

“The regulations require that such an appointment recite the facts justifying the conclusion that a federal crime was committed, and specify the crime,” Mukasey wrote. “However, the initial appointment of Robert Mueller did neither, referring instead to a national security investigation that a special counsel has no authority to pursue.”

Although Rosenstein apparently tried to correct his mistake in a new appointment memo, he has thus far refused to publicly disclose a complete copy of it. In other investigations supposedly implicating a president — Watergate and Whitewater come to mind — we were told what the crime was and what facts justified the investigation. Not here.

Nor have any of the charges filed in the Mueller investigation disclosed the Trump campaign’s criminal acceptance or solicitation of help from the Russians. The one indictment that relates to Russian criminality charges that the Russians committed social media abuses, but says specifically that if the Trump campaign got the benefit of it, that was “unwitting” — i.e., without criminal intent.

Since then, although the White House has produced documents in the tens of thousands, the investigation has gotten further from anything suggesting Trump campaign criminality involving Russian influence, not closer. Michael Cohen and Stormy Daniels, however fascinating, have nothing to do with Russian campaign influence.

This investigation needs to end, Mukasey said. Because, “the law requires that a special counsel investigate a specified crime based on specified facts, not try to be the second coming of the Lone Ranger.”

“For both legal and political reasons, the end of this investigation is overdue,” Mukasey noted.