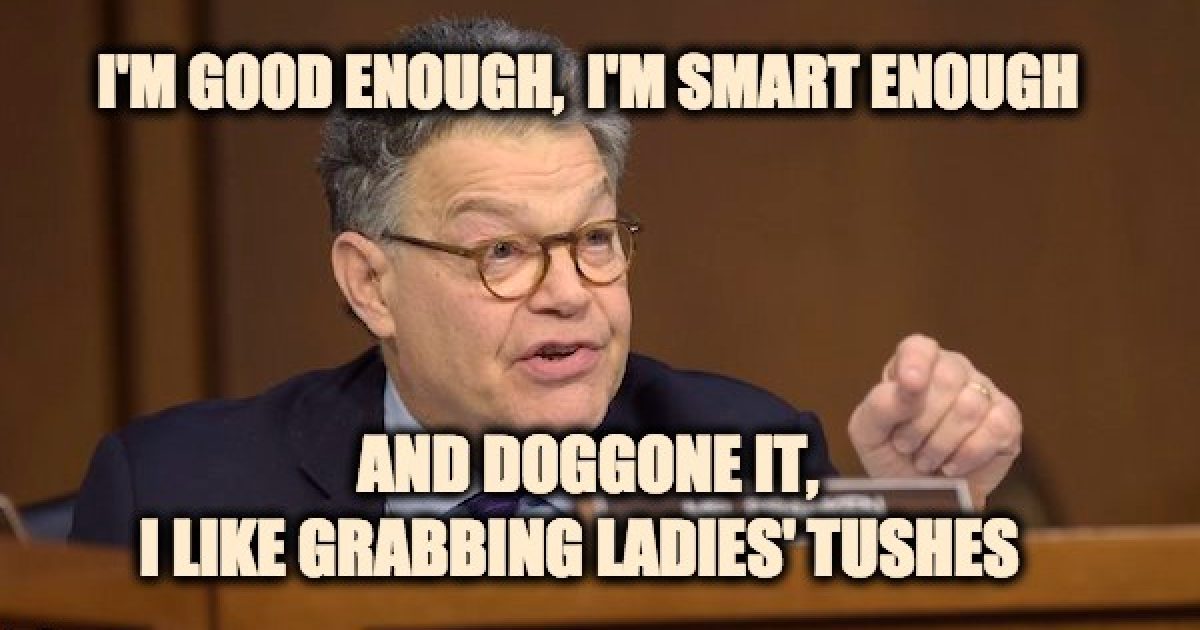 Two new and different women say Al Franken grabbed them on the butt, ad the senator says and says it is difficult to confirm or deny such accusations.

The two women who say Al Franken grabbed them inappropriately are anonymous at this point. Franken, rather than categorically denying the accusation, said it is difficult to address such claims and that he didn’t remember the events where the gropings allegedly took place. He did, however, “categorically” claim he never asked a woman for a restroom tryst.

If it was his policy to never grope women, he should have been able to deny these accusations. It wouldn’t matter if he remembered the event.

Two more women have told HuffPost that Sen. Al Franken (D-Minn.) touched their butts in separate incidents. These are the third and fourth such allegations against Franken in the past week. Leeann Tweeden, a radio host, wrote last week that Franken had kissed and groped her without her consent during a 2006 USO tour. On Monday, Lindsay Menz accused Franken of groping her at the Minnesota State Fair in 2010.

The two additional women, who said they were not familiar with each others’ stories, both spoke on condition of anonymity. But their stories, which describe events during Franken’s first campaign for the Senate, are remarkably similar — and both women have been telling them privately for years.

In a statement to HuffPost, Franken said, “It’s difficult to respond to anonymous accusers, and I don’t remember those campaign events.”

The first woman, who spoke to HuffPost on condition of anonymity because she’s worried she’ll be harassed online for making the allegation, said Franken groped her when they posed for a photo after a June 25, 2007, event hosted by the Minnesota Women’s Political Caucus in Minneapolis.

“My story is eerily similar to Lindsay Menz’s story,” the first woman said. “He grabbed my buttocks during a photo op.”

The second woman told HuffPost that Franken cupped her butt with his hand at a 2008 Democratic fundraiser in Minneapolis, then suggested the two visit the bathroom together. She spoke on condition of anonymity out of fear that the allegation could affect her position at work.

“My immediate reaction was disgust,” the second woman said. “But my secondary reaction was disappointment. I was excited to be there and to meet him. And so to have that happen really deflated me. It felt like: ‘Is this really the person who is going to be in a position of power to represent our community?’”

“I can categorically say that I did not proposition anyone to join me in any bathroom,” Franken told HuffPost.