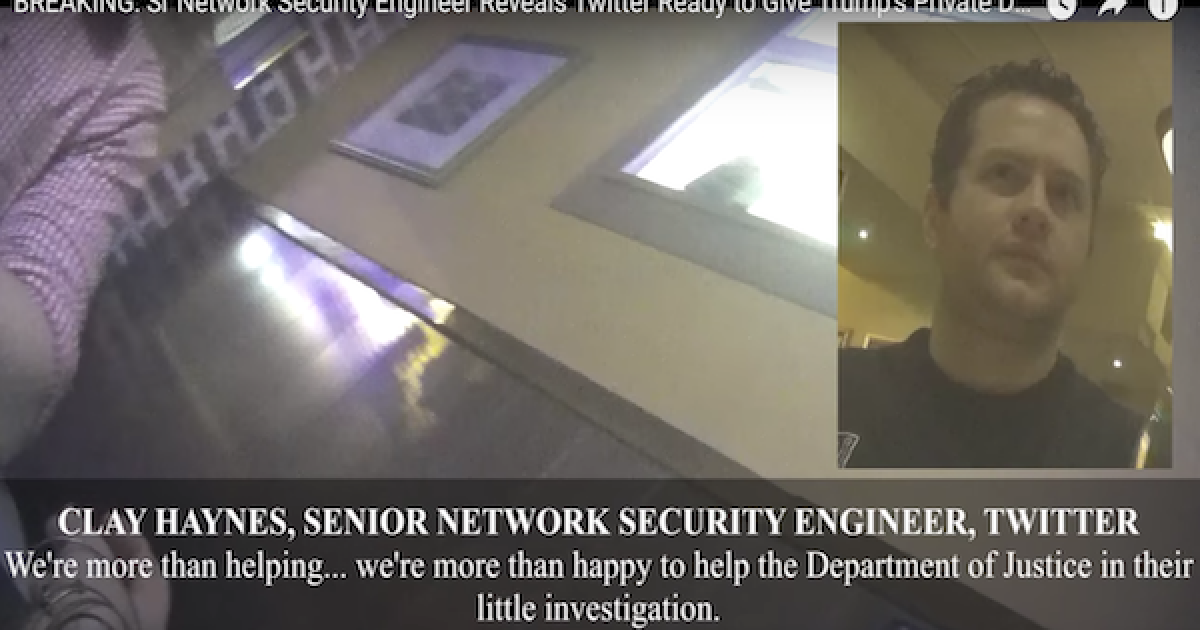 Once again we learn the top dogs of a social media site are liberal tools. Clay Haynes of Twitter got snagged in a Project Veritas undercover sting. He’s a senior network security engineer at Twitter who revealed to a Veritas undercover reporter that his company is “more than happy” to turn over the private communications and deleted tweets of President Donald Trump to the Department of Justice. If he’s being honest instead of bragging we don’t know if Twitter is voluntarily disclosing this sensitive information or acting under a court order (video of meeting embedded below).

According to his LinkedIn profile, Clay Haynes has been employed by Twitter since September 2016. On January 3, 2018, he met with a Project Veritas undercover journalist (UCJ) at Stookeys Club Moderne in San Francisco. Using a hidden video camera, the Veritas UCJ captures Haynes stating that “we’re more than happy to help the DOJ with their little investigation” of President Trump.

When prompted by the UCJ, Mr. Haynes provides additional details,

“Basically, giving them every single tweet that he’s posted. Even the ones he’s deleted, any direct messages, any mentions…”

“…he’s dangerous, I don’t like him and he’s a terrible human being and I want to get rid of him,” the self-described bleeding-heart liberal Haynes says in the video about President Trump. “In fact, we had internal reviews about that…”

In the video, he also suggests he has seen the Presidents and Donald Jr’s database of tweets, “you should look at junior and senior [Twitter accounts] and see what’s in there”

A few day’s later (1/7), Project Veritas leader James O’Keefe went undercover with Haynes to ask of Twitter was indeed working with the Department of Justice to hand over Trump’s private (DMs), public, and even erased tweets. When pressed about looking at Donald Trump’s messages, Haynes backed off explaining, “We have a subpoena process for that very reason.” The conversation continued:

James O’Keefe: “Are you working with DOJ currently on that?”

But in the end, it even if they aren’t rushing to give Trump’s Twitter info to the Doj“The fact is, even if Haynes was just speculating about helping Justice, his admission shows a clear and dangerous political bias at the highest levels of Twitter,” says James O’Keefe in the video.

“The question is: by Twitter giving private information about the President to the Justice Department, are they breaking the law, betraying a trust, following an official request or satisfying a political agenda by leading a crusade against the President.”

And before you think it’s just an issue with the POTUS, they have your twitter info also. “Describing himself as the bouncer of the network, Mr. Haynes also details the level of information Twitter retains in its databases about their hundreds of millions of users.”

Think about it for a second, remember how fast Twitter shuts down, conservatives rather than liberal users.  Who knows, they could be building a case to shut you down (or me).

The Project Veritas video is below, and there’s more coming: