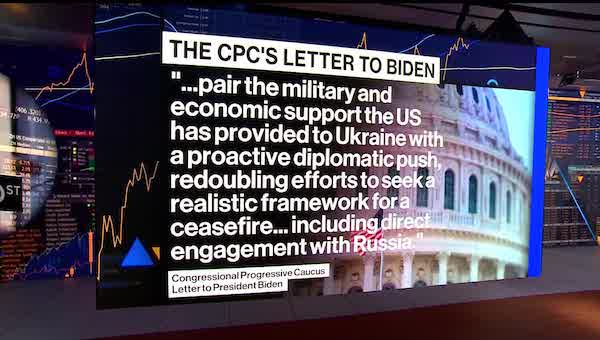 To no sane person’s surprise, Democrats now hope to end support for Ukraine during the country’s intrepid fight against Vladimir Putin’s war of conquest.

Pramila Jayapal, chair of the far left “Congressional Progressive Caucus,” even drew heat from local liberal media and the online left this week for her duplicity. The Seattle-based zealot withdrew an egregious letter that 30 Members of her fringe caucus sent only 24 hours earlier to the White House.

Jayapal and others claimed the letter was drafted several months ago and was released by staffers without vetting, but Politico reported Tuesday that Jayapal personally approved the letter’s release this week.

Not sure why it’s dated 10/24 as it was from July. Its intent is that we strive for a ceasefire, and leave the option of punishing Putin for the invasion. The reaction in some press is making it out different than an ask for more peaceful approaches in July. I don’t get timing…

Sure. And I have a mountaintop home for sale in Florida.

The screed clearly was signed by more than two-dozen leftists. Its intent was that it be released to the public.
x
This is a terrible message to send while Putin is bombing civilian targets in Ukraine, even as his troops retreat from territory they once occupied in the illegal invasion.
x

The hard left is equally or more opposed to U.S. military involvement than the neo-isolationist right. Jayapal’s group only tacitly supported our allies because a Democrat currently occupies the Oval Office.

Some Democrats were rightly furious at this message of appeasement to Russian tyranny.

This letter is an olive branch to a war criminal who’s losing his war.

Ukraine is on the march. Congress should be standing firmly behind @JoeBidens effective strategy, including tighter – not weaker! – sanctions. https://t.co/3ymk7gwGM5

Leadership also probably didn’t like the timing of a letter that divides Democrats just a fortnight before they’re set to lose their small House majority.

At least Rep. Ro Khanna, who signed the missive, boldly told CNN he did not support the decision to rescind it.

“I think the letter was common sense,” the Californian said Tuesday.

Any negotiating with Russia over the heads of Ukraine is immoral. Period. No useful diplomacy should occur so long as Ukrainians are willing to fight for their homeland and Putin refuses to cede territory. The best way to counter Putin is to continue supporting Ukraine’s heroic struggle against rogue Russian forces.

As for Republicans, I was quite clear late last week that Kevin McCarthy’s recent “no blank check” remark was embarrassing and distressing; however, other than appeasing Tucker Carlson and some nationalists, it didn’t commit the House leader to anything. Thankfully, Senate Leader Mitch McConnell responded adequately by saying Republicans in the upper chamber want aid to Ukraine to be expedited.

Isolationism  — led by ignorant adherents on both fringes — is naïve, not in our best interests, and anathema to history.

One lesson from this episode is that because our government-run schools fail to teach its importance, Team Biden should endeavor to continuously explain why freedom matters and support for Ukraine is in the national interest and is money very well spent. Do they have anyone coherent enough to do so?
s
Maybe Dalibor Rohac, who offered a stellar column in Wednesday’s New York Post, can assist.
s

“The reason this is not the time for some chimerical “negotiated settlement and ceasefire” has nothing to do with anyone’s lack of effort but rather with the fact that the existing differences of opinion between Russia and Ukraine cannot be resolved at the negotiating table but only on the battlefield,” the senior AEI fellow opined.

Isn’t being harsh better than being a useful idiot?f