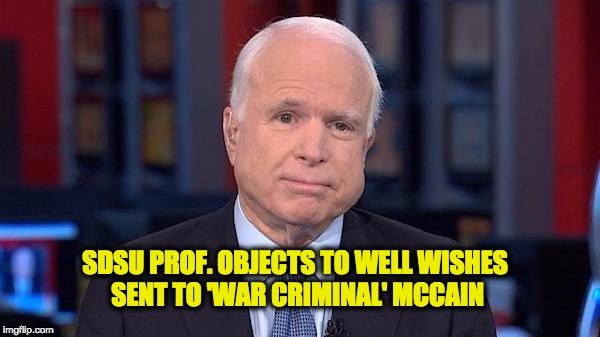 San Diego State University political science professor Jonathan Graubart is annoyed at all the good tidings sent to Senator John McCain (R-AZ) since last week’s announcement that the senator was suffering from a particularly aggressive form of brain cancer. The shocking McCain announcement unleashed a flood of good wishes directed to the ailing senator from both sides of the political aisle.

Graubart wrote on Facebook explaining that his “annoyance” was based on his opinion that McCain is “a war criminal and, more to the point. Someone who as a politician has championed horrifying actions and been lousy on state commitment to public health.” And that “it reinforces the notion that some lives are more important than others.”

I find myself annoyed at the groundswell of good wishes for John McCain after his diagnosis of glioblastoma and have been thinking through why. A great line from Arendt’s Eichmann in Jerusalem comes to mind regarding the valuing of elite lives over ordinary lives:

“There are more than a few people, especially among the cultural elite, who still publicly regret the fact that Germany sent Einstein packing, without realizing that it was a much greater crime to kill little Hans Cohn from around the corner, even though he was no genius.”

This analogy should not be interpreted too strictly. McCain is certainly no Einstein and I don’t mean just on brains. Einstein had very appealing humanist instincts, as a socialist, antiwar, anti-imperialist, and anti-statist Zionist. McCain is a war criminal and, more to the point. someone who as a politician has championed horrifying actions and been lousy on state commitment to public health. So dying or not, he’s a risible public figure (I have no idea what he is like on the personal level and don’t care).

But ultimately what troubles me is the urge to send such well wishes to an utter stranger as it reinforces the notion that some lives are more important than others. There are lots of people with glioblastoma and who have died from it (including my mother twenty years ago). I would much rather read random good wishes to contemporary little Hans Cohns than to politicians.

I agree with Professor Graubart that “contemporary little Hans Cohns” and his late mother’s life are just as important as that of John McCain. However, the point that he is missing is that McCain’s life has touched more people than the fictional Hans, or his mom.

After his service in the Navy, he spent four years in the House of Representatives and is now in the middle of his sixth term in the Senate. Putting it all together, so far he has served fifty-seven years serving this country and the people of Arizona.  John McCain hasn’t received all the well wishes because he is somehow better than people such as Graubart ‘s mom, he received the wishes because although he didn’t meet all the people whose lives he touched, he touched them nevertheless. His decades of service to America has motivated political supporters and opponents to send him prayers and wishes.

“I would never wish cancer upon my worst enemy and then to be annoyed by people just wishing you the best for having cancer, I just thought it was totally inappropriate,” student Ben Dilbeck said.

The post was read around the world. Former SDSU student Colby Tunick read it while in Prague.

“I think I was a little disturbed to be quite honest,” Tunick said. “You may disagree with someone politically, morally, philosophically, but you don’t wish someone harm.”

Tunick said this kind of behavior doesn’t surprise him based on what he observed in Graubart’s classes.

“He has told me that he thinks it’s his job as an academic to stir controversy and he normally does that through Facebook,” Tunick said.

Other people defended Graubart’s freedom of speech, describing him as a man of integrity and intelligence.

In a statement, a San Diego State University spokesperson said:

“SDSU does not have a social media policy for faculty and staff. As a public institution, we do not and cannot regulate the private speech of students, faculty or staff. However, that should not imply the university’s endorsement of any particular viewpoint.”

Professor Graubart description of McCain as a war criminal is absurd. It has more to do with his political philosophy than anything McCain has done. Whether one agrees with him or not, McCain has battled against waterboarding, something he perceives as torture, “Our enemies act without conscience. We must not.”

Perhaps Jonathan Graubart’s reaction to McCain stems from his opposition to any American intervention in wars, not because he doesn’t believe they serve U.S. interests but based on some of his writings, he seems against any type of war, even if it’s to prevent a genocide. His “R2P and Pragmatic Liberal Interventionism: Values in the Service of Interests” argues against such intervention.

Jonathan Graubart seems to be a fraud. If he truly supports what he perceives as human rights, he would be urging military intervention to prevent genocide, war crimes, ethnic cleansing and crimes against humanity, he wouldn’t support the anti-Semitic, anti-Israel BDS movement, and he wouldn’t allow his extreme left-wing politics argue against an outpouring of well-wishes for a senator (or any human being) fighting against a horrible disease.

Graubart has every right to post his opinions on Facebook or anywhere else. But Graubart’s Facebook post is a larger issue than the First Amendment rights of one college professor. It indicative of the political indoctrination at San Diego State University.

The SDSU chapter of College Republicans issued a statement that said in part:

Jonathan Graubart and San Diego State is a microcosm of the one-sided leftist brain washing taking place at America’s Universities.

Below (in case he removes it) is a screen shot of the Facebook post written by Jonathan Graubart: 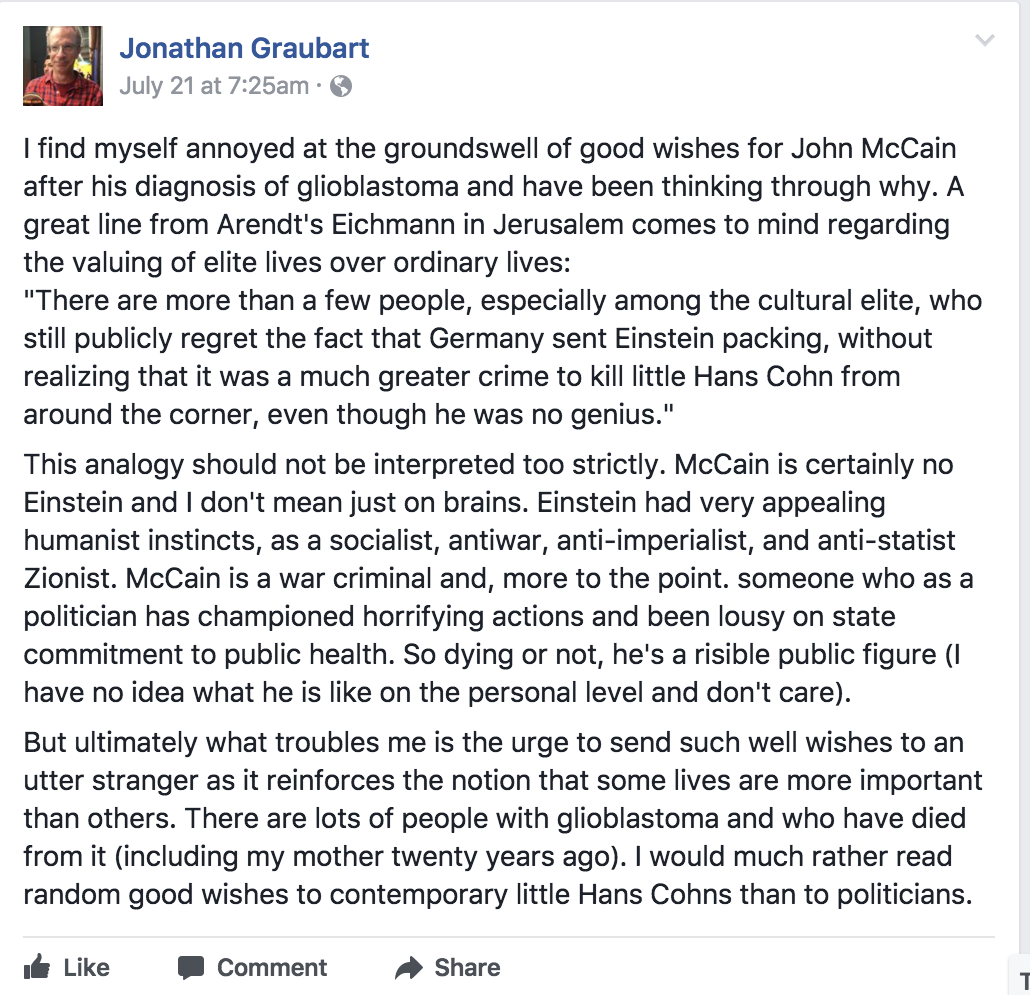