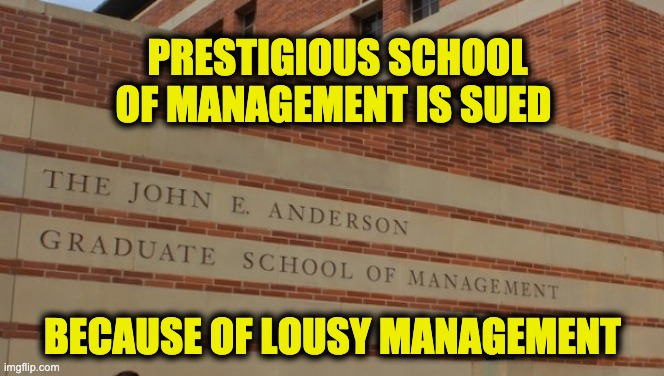 UCLA, which is part of the California college system, suspended Professor Gordon Klein for a few weeks because he refused to grade African American students more leniently than other students. The suspension unfairly hurt Klein’s reputation. Now the professor is fighting back by suing the school.

Gordon Klein, an accounting professor at the university’s Anderson School of Management, was suspended after he sent an email to his class telling them that he wouldn’t satisfy the demands of leftist activists asking him to grade black students on a curve… On Tuesday, he filed suit against the school in  L.A., seeking compensatory damages, punitive damages, and attorney fees.

After George Floyd was killed, Klein received a letter from a student who wasn’t black asking that he provide more leniency in grading the work of black students. The note said in part:

“The unjust murders of Amhaud Arbery, Breonna Taylor, and George Floyd, the lifethreatening [sic] actions of Amy Cooper, and the violent conduct of the UCPD in our own neighborhood have led to fear and anxiety which is further compounded by the disproportionate effect of COVID-19 on the Black community. As we approach finals week, we recognize that these conditions will place Black students at an unfair academic disadvantage due to traumatic circumstances out of their control.”

“We implore you to mandate that our final exam is structured as noharm, where they will only benefit students’ grades if taken,” the letter continues. “In addition, we urgently request shortened exams and extended deadlines for final assignments and projects.”

“This is not a joint effort to get finals canceled for non-Black students, but rather an ask that you exercise compassion and leniency with Black students in our major.”

Thanks for your suggestion in your email below that I give black students special treatment, given the tragedy in Minnesota.

Do you know the names of the classmates that are black? How can I identify them since we’ve been having online classes only?

Are there any students of mixed parentage, such as half black-half Asian? What do you suggest I do with respect to them? A full concession or just half?

Also, do you have any idea if any students are from Minneapolis? I assume that they probably are especially devastated as well. I am thinking that a white student from there might possibly be even more devastated by this, especially because some might think that they’re racist even if they are not. My TA is from Minneapolis, so if you don’t know, I can probably ask her.

Can you guide me on how I should achieve a “no-harm” outcome since our sole course grade is from a final exam only?

One last thing strikes me: Remember that MLK famously said that people should not be evaluated based on the “color of their skin.” Do you think that your request would run afoul of MLK’s admonition?”

By that evening, students were calling for my job. Soon after, they circulated a petition demanding I be fired; within a day or two, nearly 20,000 had signed — without knowing anything about me or taking into account, as far as I could tell, the implications of non-color-blind grading. I was attacked for being a white man and “woefully racist.” On June 5, three days after I was first emailed, I was suspended amid a growing online campaign directed at me.

It was around that time that I started to receive death threats on voicemail and email. One email, dated June 11, read: “You are a typical bigoted, prejudiced and racist dirty, filthy, crooked, arrogant Jew kike mother f**ker! Too bad Hitler and the Nazis are not around to give you a much needed Zyklon B shower.”About a week after this whole thing first blew up, there were police officers stationed outside my house. (It would take UCLA’s threat manager, Chris Silva, another ten days to check in with me to make sure I was okay.)

The Dean of the Anderson School of management, Antonio Bernardo, sent out an email to their mailing list apologizing for Klein’s letter, “On behalf of Anderson, please accept my apology for the very hurtful sentiments expressed in this message. Please know that respect and equality for all are core principles at Anderson.”

The professor was placed on “mandatory leave,” fancy talk for suspension. As he explained:

Without any deliberation I was aware of, Bernardo suspended and banned me from campus. Then, like a well-choreographed dance, the Anderson administration started attacking my character on social media. As I documented in my legal claim, on June 3, one day after I received the first email, the Anderson School’s Twitter account sent out a message:

Respect and equality for all are core principles at UCLA Anderson. It is deeply disturbing to learn of this email, which we are investigating. We apologize to the student who received it and to all those who have been as upset and offended by it as we are ourselves.

This implied I didn’t believe in equality for all — when that was exactly what I believed and continue to believe. Judson Caskey, who oversees the accounting program at Anderson, was tasked with monitoring my outgoing emails. I had been deemed radioactive.

Less than three weeks after the suspension began,  the school’s Discrimination Prevention Office issued a notice that Klein did nothing wrong, and the suspension was lifted.  But by then, the damage was done.

College Fix reported that because of the negative publicity from the incident, Professor Klein lost at least $500K in private consulting jobs short term and possibly more long term because he would have a hard time building relationships now that he was deemed racially radioactive.

You see, most of my income comes not from teaching at UCLA but from consulting to law firms and other corporations. Several of those firms dropped me after they got wind that I’d been suspended — the better to put distance between themselves and a “racist.” That cost me the lion’s share of my annual income. The students involved in this escapade may have moved on to other causes. I have not. I’m not sure I ever will.

This is more wokeism gone mad.  First of all, the Professor wasn’t given a hearing. He was suspended based on the reaction of the campus cancel culture. IMHO the Anderson School of Management was teaching students a lousy lesson about management. The suspension was a message that everyone shouldn’t be treated the same. That’s not how a school of management  should want the business managers of the future to act.  Not only should the school want all students to be treated the same, but I would guess most African Americans would demand it also.  The black people I count among my close friends would angrily reject the special treatment suggested in the letter to Professor Klein (and they would probably be near the top of their classes anyway).

Professor Klein got royally screwed and deserves to win this lawsuit.UCHLA suspends professor