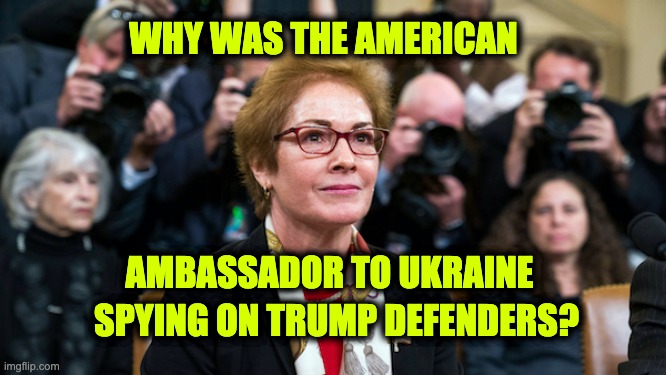 Story after story about actual government corruption and abuses of power, including spying on Americans, leads right back to the BFFs of Obama and Biden. Remember that whole question of impeachment? Do we remember WHY it came up? pro-Trump Americans

It was a Democrat CYA that sprang up when people started sniffing around too close to where the bodies were buried. Remember the phone call? Trump dared to ask whether there was any truth to Biden’s boasting about getting a Ukrainian official fired and whether there was anything about it that smacked of corruption.

For one thing, certain corrupt characters in Ukraine figured prominently in the Spygate scandal, even providing another bogus accusatory document — informally known as the ‘black ledger’ — that prompted the investigation forcing Trump’s campaign manager to step down in the middle of his campaign.

There were rumored to be some other sketchy operations hostile to Trump originating there. Add to that, Biden’s boasting about holding Ukraine’s billion-dollar financial aid hostage unless they fire the prosecutor looking into the company Joe’s son just ‘happened’ to be working for, and that could present a significant scandal.

Trump’s hands were tied from looking into this case until the conclusion of the Mueller report — otherwise, Democrats would cry ‘obstruction’ and pounce on Trump to impeach him.

Officials at the U.S. embassy in Kiev ordered the monitoring of 13 prominent Americans’ social media accounts during the early days of the Ukraine scandal in spring 2019 and later were informed their activities potentially violated the Privacy Act, according to State Department memos made public on Tuesday.

The U.S. ambassador at the time, Marie Yovanovitch, and one of her top deputies, former Deputy Assistant Secretary of State George Kent, were apprised of the social media monitoring, emails show.

Embassy officials used search terms indicating they were interested in social media posts involving the ambassador, liberal megadonor George Soros, and the controversy around Joe Biden and Burisma Holdings, the Ukrainian gas company engulfed in a corruption controversy that hired the vice president’s son Hunter in 2014. State officials testified during last year’s impeachment proceedings that the Bidens’ role in Ukraine created an uncomfortable appearance of a conflict of interest that undercut U.S. efforts to fight corruption inside Ukraine.

Regular readers of this site may be familiar with Marie Yovanovitch, who’s been accused of blocking Ukraine from providing evidence to A.G. Barr and lying to the Schiff committee. But it didn’t lead to any charges because she testified against President Trump.

The timing of the latest account of the Obama administration spying on American Citizens ‘just happened’ to correspond with the time at which Americans were taking an interest in the Embassy’s activities with Ukrainian prosecutors and the Bidens.

The same day, Yovanovitch received an email updating her on the social media monitoring.

“Thanks Ambassador — I just wanted you to be aware as we are really trying to help them and recognize how hard everyone is working in this especially trying time,” an official whose name was redacted wrote Yovanovitch. “The good news is our social media team back here is now helping to provide them with the reports they want when Kyiv is asleep/offline — through existing PD tools — so this should greatly help.”

…Amanda Milius, a former senior adviser and deputy assistant secretary in the early Trump State Department, told Just the News she was alerted by State Department leadership about the embassy’s social media monitoring early on and was assured the embassy was instructed to stop the activity targeting Americans because it violated federal law.

“Personally I find it hard to believe that senior communication officials at post were not aware of the limitations of the Privacy Act because all communications employees and contractors are very well versed on what they are allowed and not allowed to do in regards to the Privacy Act and the Smith-Mundt law,” Milius said in an interview Tuesday.

The memos show the embassy sought to use a Facebook-related product called CrowdTangle to handle automated social media monitoring. A deck about the product’s capabilities was included in the FOIA release.

…”These new documents confirm Deep State officials at the Ukraine Embassy seemed to set up an enemies list to help illicitly monitor and report on the social media postings of President Trump’s family and lawyer, as well as journalists,” he said. “The State Department hid these smoking gun documents for months.”

Democrats picked Biden to be their guy AFTER we already knew that accusations of nepotism and corruption surrounding Burisma was an albatross around his neck — and they STILL picked him.

Bringing this story into the harsh light of day is entirely fair game.

Especially if there are already accusations of Biden dancing like a marionette because of foreign favors lining the pockets of his family members during the LAST time occupied the White House.

Solomon’s piece is a good one, and well worth reading in its entirety.

And here are some related articles: