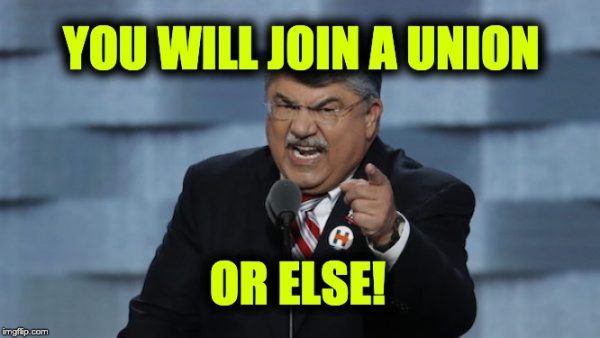 There’s a bill that passed the House along party lines recently that you may have never heard of: the PRO Act, or “Protecting the Right to Organize” – HR 2474.

[Catch the “for other purposes” part.]

Actually, the bill protects the union’s rights to force themselves down the throats of workers.

The bill effectively deletes right to work laws in 27 states and makes union membership MANDATORY. It also destroys the ability of smaller companies to become franchises – because the bill demands “joint employers.” It’s a bill designed to make certain Democrats get donations from Unions…at the expense of American businesses and our flourishing economy.

HR 2474, or the PRO Act, amends the National Labor Relations Act and two other laws in a severe way.  Though you will read that now farmworkers and others can sue their employers, the vast parts of this bill do more than that. Republicans who read the law found severe problems in it:

If the Pro Act were to become law, it would mandate workers to pay union dues, subject personal information to organized labor institutions, and eliminate the right to a secret ballot.

The bill would overturn Idaho’s longstanding “Right To Work” law and replace it with federal labor mandates. It would also re-structure corporate franchise rules so drastically that franchises could cease to exist in Idaho.

In terms of potential impact on Idaho, “The Pro Act” would be more appropriately deemed “The Con Act”.  Rep Russ Fulcher, R-ID.

The bill would force employers to turn over employees’ private information—including cell phone numbers, email addresses, and work schedules—to union organizers so they can intimidate employees until they give into unionizing.

The Supreme Court’s Janus Decision in 2018 stated that a union could not force employees to pay dues when they do not belong to the union, because it was a First Amendment violation. This bill would undo that ruling, at least until it could be brought before the court again.

Andy Puzder, in a Fox Business report, stated that the legislation would be a disaster for the American Economy.

“While couched as workers’ rights legislation, the PRO Act is a tacit acknowledgment that the Democrats’ Big Labor allies have a serious problem: workers just aren’t very interested in what the unions have to offer.  When the Bureau of Labor Statistics (“BLS”) began reporting the data in 1983, union membership stood at 20.1 percent of US employees.  That percentage has steadily declined ever since and, in 2019, dropped to 10.3 percent.

Dwindling union membership means declining revenue and political influence. So, the Democrats, who depend on union endorsements and union dues to support their political campaigns, are advocating policies that essentially eliminate the option of going non-union.

Perhaps most tellingly, the PRO Act would eliminate Right-to-Work laws nationwide, an important means for workers to hold their unions accountable and a critical protection for workers who do not want to financially support a political organization with which they disagree.  As a result, the PRO Act would force workers in the 27 states that currently have right to work laws into unions, compelling them to pay union dues, despite their desire to remain independent.

The bill would also eliminate the right to a secret ballot in union elections, forcing workers to vote in front of union organizers and colleagues via ‘card check,’ a system that both sides of the aisle have condemned.”

Estimates from the American Action Forum are that this bill would cost American employers at least $12.1 Billion and cause losses of $33.3 Billion and that’s from just two of the provisions in the bill, according to Puzder’s report.

The “joint employer” clause in this bill effectively destroys any ability to be an independent contractor, or become a franchisee as a smaller partner.  (So much for those people who wanted to have a McDonalds or other franchise). It’s big unions all the way, baby. Compulsory unionization is on the Democrat plate. Freedom is not. Their plan to control everything in your life is on full display in this bill.

There are 40 Democrats in the Senate that have signed on to it, but no Republicans so far. Hopefully, the Senate will not be able to pass this – the President would veto it anyway.

But keep these kinds of control freak bills in mind as you go to the polls in November and even before: if the Democrats get into power again, America is headed for government control of every aspect of your life.