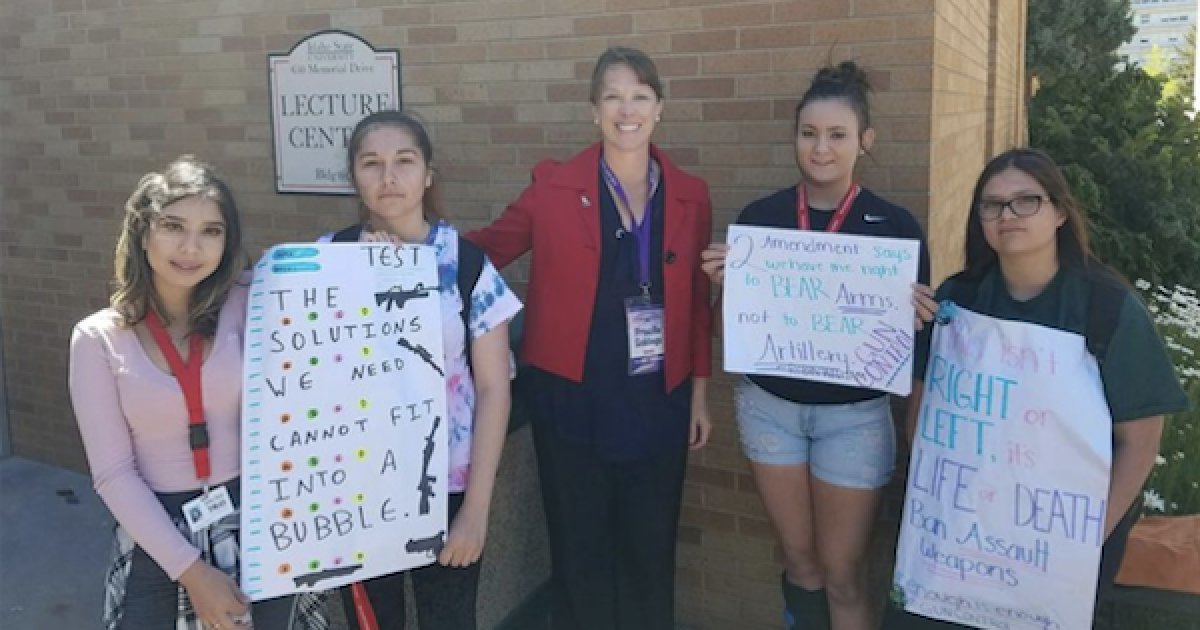 During one of the convention’s breaks, Idaho State Rep. Priscilla Giddings (R) walked outside and noticed a group of protestors calling for gun control. Giddings read their signs and decided to pose for a picture with them. She then shared the following poston Facebook:

Giddings, by the way, happens to be a former combat pilot and currently serves as a major in the Air Force Reserve.  As Baumann noted, she has utilized firearms during multiple deployments in the Middle East.

Giddings, Townhall reported, said the anti-gun protest signs piqued her curiosity, so she went over to take a look.

“I’m a very strong supporter of guns and the Second Amendment,” she said.

“The people in the Middle East, they’re not allowed to have guns. The Taliban controls all of them,” she added. “I think about that, about fighting for freedom. Freedom isn’t free, but what does that mean? My friends have given up their lives for freedom, for free speech.”

Giddings carries a 30mm casing with her, because it saved her life overseas.

“I always share what my 30mm bullet looks like. All of my constituents have seen it,” she said. “I was the only woman in the Fighter Training Unit. I didn’t think I was doing well but then I won the ‘Top Gun’ award. I got closer to my target than any of the men.”

Giddings said the 30mm casing is symbolic of freedom in America, particularly because the average citizen in the Middle East doesn’t have the opportunity — or ability — to defend themselves against terrorists, like the Taliban.

“My 30mm bullet is a tool of symbolism,” she said.

But it seems that some leftists, including some in the so-called “mainstream media,” were triggered by the offer.

Keep in mind we’re talking about an empty shell casing.

Wow..Representative Priscilla Giddings..you’re an adult, right?
I’m sure a lot of people are now aware of other empty things you have.. pic.twitter.com/GzgnoYxPbs

Students came to peacefully protest the Idaho State GOP Convention. Rep. Priscilla Giddings took a picture with them and posted it to FB with the following caption: pic.twitter.com/zbjLySRtbP

Even Chelsea Clinton and George Takei weighed in:

Rep. Priscilla Giddings never threatened anyone. Did she mock the absurdity of an anti-gun sign? Yes and in a very subtle way. Again, no threat was implied by her.

Now people are calling for her assassination or gang rape.

Will Idaho’s media cover this? pic.twitter.com/ppp91b8Hd3

“Giddings received a number of vile Facebook messages,” Baumann said. “Ironically, most of them involved threats of her being assassinated…with a gun.”

Here are just a couple images Baumann posted. There are plenty more.

Here’s a video with some of the voicemails she received:

he threats against Giddings made it to John Nolte’s growing list of media-sanctioned threats and targeted harassment of Trump supporters, egged on in part by the irresponsible rhetoric of Trump-haters like Maxine Waters and fake Washington Post “conservative” blogger Jennifer Rubin.

The situation has gotten so bad that a growing number of Americans now think a second bloody civil war could break out in the next five years.

In February 2011, I first opined that liberalism, at its core, is an ideology of rage and hate.  It’s only gotten worse since then and yes, increasingly bloodthirsty liberals prove that assertion correct on just about any given day.