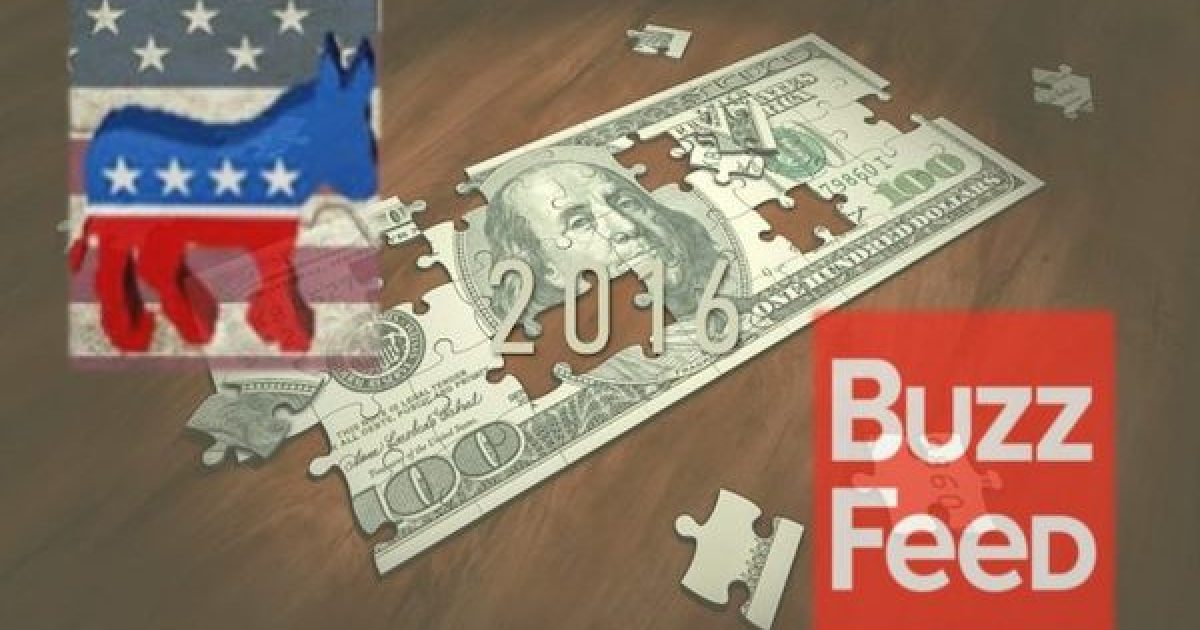 Twitter user @2xwide_dreaming who goes by the nom de plume of “HRC’s Field Sobriety Test” gets a 21-gun salute for digging up this information and revealing this fascinating tidbit on Tuesday:

Did you cut Fusion GPS out of the deal or something, @BuzzFeedBen?

WTF, man?! No wonder you had such a big lay-off in January… pic.twitter.com/Zl37shFmvz 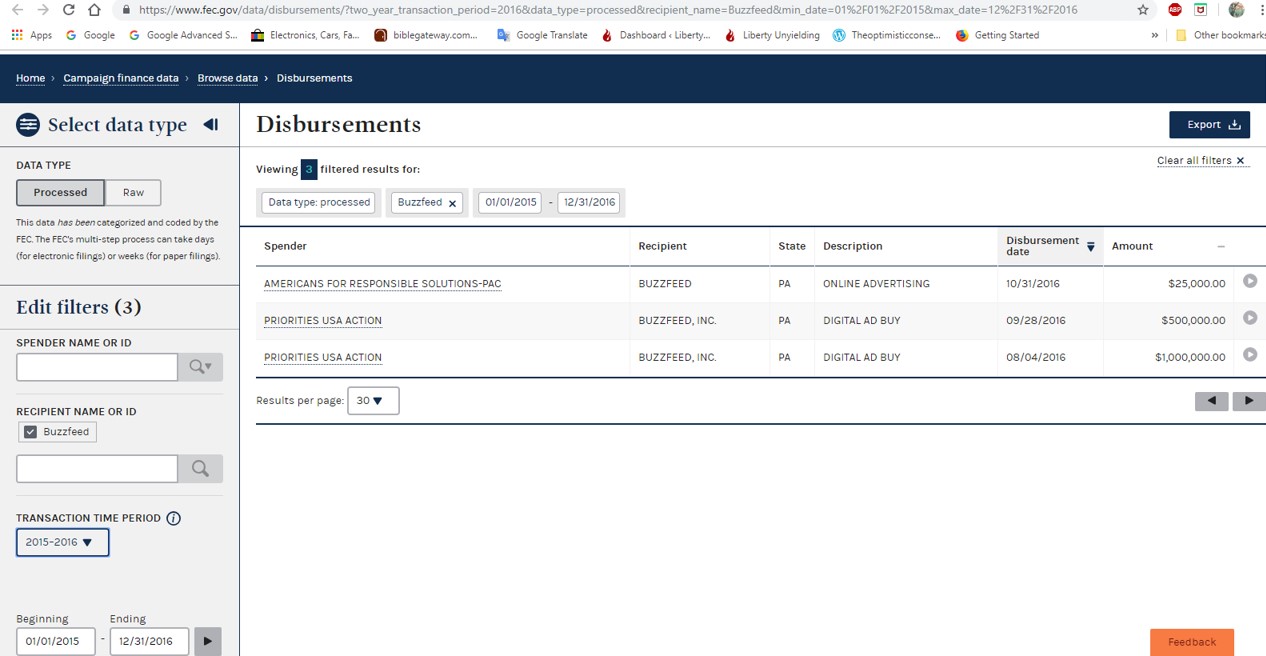 Click to enlarge for legibility. Link to FEC site in the text.

As @2xwide_dreaming notes, there are no other transactions like these in the FEC database.  If you visit the FEC website (this link is as serviceable a portal as any; you can run different searches from it), you can verify that that statement is comprehensively true.

The payments to BuzzFeed in 2016, two from Priorities USA Action and one from Americans for Responsible Solutions, are the only ones of their kind.

BuzzFeed is not listed as a recipient in any other FEC-recorded transactions, from 2007 to 2019.

Moreover, no other media site with a profile even somewhat similar to BuzzFeed’s is a recipient of PAC-type bulk payments for “online advertising” or “digital ad buys” in any form.

Other recipients of bulk payments for digital ad buys or online advertising is either campaign-advertising companies (which then go on and purchase ads with news and other content sites) or major political nonprofits like Planned Parenthood Votes and the League of Conservation Voters Victory PAC.

It is bulk payments like these that run into the millions, or at least the hundreds of thousands at a time, like the two payments made in 2016 to BuzzFeed.  But BuzzFeed is not an advertising company.

If, by comparison, one searched for how Facebook was paid during the 2016 campaign cycle, you will see numerous small payments for ad buys from (mostly) individual candidates’ campaigns.  Even the largest ad buys at Facebook are in the single-digit thousands.  Most are much smaller.

In terms of placing content for web users, buying ads at Facebook or Google might be most similar to purchasing ads at BuzzFeed.  But the purchase model is entirely different – if we accept that BuzzFeed was actually paid $1.5 million for “digital ads” by Priorities USA Action.

That amount of money would suggest that BuzzFeed put considerable resources into developing ads, of which there is no evidence, and which would have been out of character (and out of BuzzFeed’s lane); that BuzzFeed ran nothing at its own site but Democratic ad content in the last three months of the 2016 election, which is obviously not the case; or that BuzzFeed undertook to place ads elsewhere on the PAC’s behalf, as if BuzzFeed were an ad-campaign company like one of the others Priorities USA Action spent millions with, in 2016 (e.g., Precision Network LLC; company website here).

BuzzFeed doesn’t appear to have ever offered such a service.  Moreover, except for the second Democratic PAC in 2016 – Americans for Responsible Solutions – there is no FEC record of any other political entity buying digital ads or online advertising services directly from BuzzFeed in any year since the company was founded in 2006.

The bottom line from all this analysis is that the payments totaling $1.5 million to BuzzFeed in 2016 don’t actually look like an ad buy.  The dollar figure is too big, and the implied direct-purchase method doesn’t comport with anything else recorded by the FEC.

What was the Democratic PAC paying for?

So what was Priorities Action paying BuzzFeed for?  Good question.  Our Tweep @2xwide_dreaming makes the connection to Fusion GPS.  If the Steele dossier is implied, which BuzzFeed had in hand long before it was published in January 2017, that’s not impossible, by any means.  But it would indicate that two whopping payments totaling $1.5 million yielded the Democrats a big fat goose-egg before the election if what they wanted was to see the Steele dossier published in some form by BuzzFeed.

That specific scenario doesn’t really ring plausible to me.  Perhaps the payments were about dossier-related content, or at least Trump-related Fusion content, in the weeks before the election.

There’s another possibility.  I’m not saying this second one is any kind of slam-dunk, but it is noteworthy how coincident it would be on the calendar.  (And it might have a generation thread running through Fusion GPS, for that matter.)

BuzzFeed, you may remember, was the first media outlet on the “fake news” theme in 2016.  BuzzFeed debuted its dedicated “fake news” line of effort at the beginning of July 2016, announcing that the supervision of Craig Silverman was being imported from Canada to honcho it.  As Alastair Reid put it at the time, “Silverman hopes to make debunking [fake news] ‘a real global effort’ on a par with [BuzzFeed’s] news and ‘buzz’ output.”

Some products emerged in the summer of 2016.  But for media “buzz” purposes, BuzzFeed put “fake news” on the map with a pair of significant articles in October and November 2016 – one shortly before the election, and one shortly after it.

The curious relevance here is how much the two BuzzFeed articles were about the supposed impact of “fake news” on the election, with an emphasis on “fake news” propagation via social media; i.e., Facebook and Twitter.  A parallel drumbeat folded into it about the involvement of Russians under false pretenses.

As the fall of 2016 wore on, it became clear that the “fake news” theme was an orchestrated one, consistently framed as having had an effect on the outcome of the November election.  (Discussion here, here, and here from November and December 2016.)  The direction of the theme was toward implicating the Russians — and Trump.

Two additional data points serve to put this in enough context for the time being.  One is an article by John Lott from January 2019, in which he recounts that BuzzFeed’s founder and CEO, Jonah Peretti, set up a website using Lott’s name to urge illegal behavior regarding firearms.  Lott’s allegation, in other words, is that Peretti created “fake news” implicating Lott.  Lott cited a separate case in which Peretti reportedly did the same thing to another individual.  (In a court settlement, Peretti acknowledged performing the mechanical acts Lott claims; i.e., using Lott’s name in a website and media dissemination campaign.)

The second data point is the saga of the “Birmingham Project” funded through the firms American Engagement Technologies (AET) and New Knowledge, by Silicon Valley billionaire Reid Hoffman.  Project Birmingham was a disinformation campaign run against Alabama candidate for U.S. Senate Roy Moore in 2017 – a campaign that used the techniques supposedly employed by the Russians to “interfere with” the U.S. election in 2016.

It was the BuzzFeed messaging theme about “fake news” in 2016 that laid out the framework for the “Russians and social media” talking points.  The thrust of it at the time was that purveyors of “fake news” were frying our brains with it by making it go viral on social media, faster than it could be debunked.  Russia-linked bot-nets were implicated in this nefarious skulduggery.

The weird purpose of Project Birmingham was to achieve exactly that: make fake news about Roy Moore go viral on social media.  It was billed afterward as an “experiment.”  Mr. Hoffman – a big-money donor to Priorities USA Action in 2012, and to the Democratic effort to retake the House in 2018 – says he never directly authorized Project Birmingham.

Interestingly, Hoffman didn’t put as much into Hillary Clinton’s campaign in 2016 as he did into the 2012 and 2018 campaigns.

But Priorities USA Action did put quite a bit into defeating Roy Moore in 2017.

And a key reason all this not only matters but looks tied together, centers on a report accepted by the U.S. Senate on “Russians and fake news” in the 2016 election cycle.  That report was honchoed in part by an executive of the firm New Knowledge, which ran the Project Birmingham campaign.

In other words, the executive – Jonathan Morgan – was involved in both explaining the Russians’ nefarious behavior to Congress, and running a false-flag operation, just like the Russian op he described, against Roy Moore.

It’s a bit hard to not see what looks an awful lot like double-dealing in that circumstance.  Throw in the point that former Obama campaign organizer Mikey Dickerson was involved with both New Knowledge and Project Birmingham, and this little online-media drama has quite a peculiar look to it.

There’s one more coincidence that is downright strange.  In December 2018, we laid out the story of a long-time Democratic crony of the Gores and Clintons who made an odd, out-of-the-blue $1 million donation to Donald Trump’s inaugural fund in December of 2016.  The donor, Franklin L. Haney, has been a million-dollar-class donor to Priorities USA Action in recent campaign cycles.  He has also been seeking to buy and bring online a nuclear power plant at a site called Bellefonte, located in Hollywood, Alabama.  On 30 November 2018, he abruptly lost his bid to complete that purchase.

In April 2018, Haney had hired Michael Cohen, one-time personal attorney to Donald Trump, to help him complete the purchase of the nuclear plant.  That was weird, to be sure.  Shortly afterward, Cohen’s home and office were raided by the FBI, and Haney dropped him as counsel.

But the strange coincidence is this.  A second Obama administration alumnus, Evan Coren, was also involved in a false-flag op against the Alabama campaign of Roy Moore in 2017.  According to Chris White of the Daily Caller News Foundation, Coren’s false-flag op “happened alongside” the “similar campaign by Dickerson.”

Coren “is a progressive activist,” says White, and his day job since Obama’s first term has been “handl[ing] classified documents for the Department of Energy.”

That would be, randomly, the Department of Energy that has to maintain documents on a site like Bellefonte, and was closely involved in Franklin Haney’s effort to purchase and develop the still-unfinished nuclear power plant constructed there.

Oddly enough, information about Haney’s last-minute loss of the nuclear plant purchase and the disclosures about the false-flag disinformation op against Roy Moore – which relates so clearly to the theme BuzzFeed was writing about in 2016 – both came out within a few days of each other in December 2018.

No series of unfortunate events would be complete without apparent social-media suppression.  Our Tweep @2xwide_dreaming cites numbers that seem to indicate Twitter has been clamping down tight on the dissemination of the Priorities USA Action payments to Buzzfeed.

Whoa… looks like $TWTR is throttling the HECK out of this one!! ?

I have almost 6k followers and this has been RT 27 times for LESS THAN 1200 impressions.

You should take a look at this suppression!!

Coincidences pile up (if one believes in coincidences).

* On 31 October 2016, BuzzFeed was paid an additional $25,000 by another Democratic PAC, Americans for Responsible Solutions (the PAC run by Gabby Giffords and Mark Kelly).  The figure here doesn’t put this payment in the same class as the ones from Priorities USA Action.  It is unlikely to have broader implications, although it also doesn’t appear to have actually been a purchase of online advertising.  It may have been funding for a signature BuzzFeed effort to identify gun-restriction themes online and promote them as viral, in the final week before the November election.