Presidential Debate #2: Trump By A Knockout 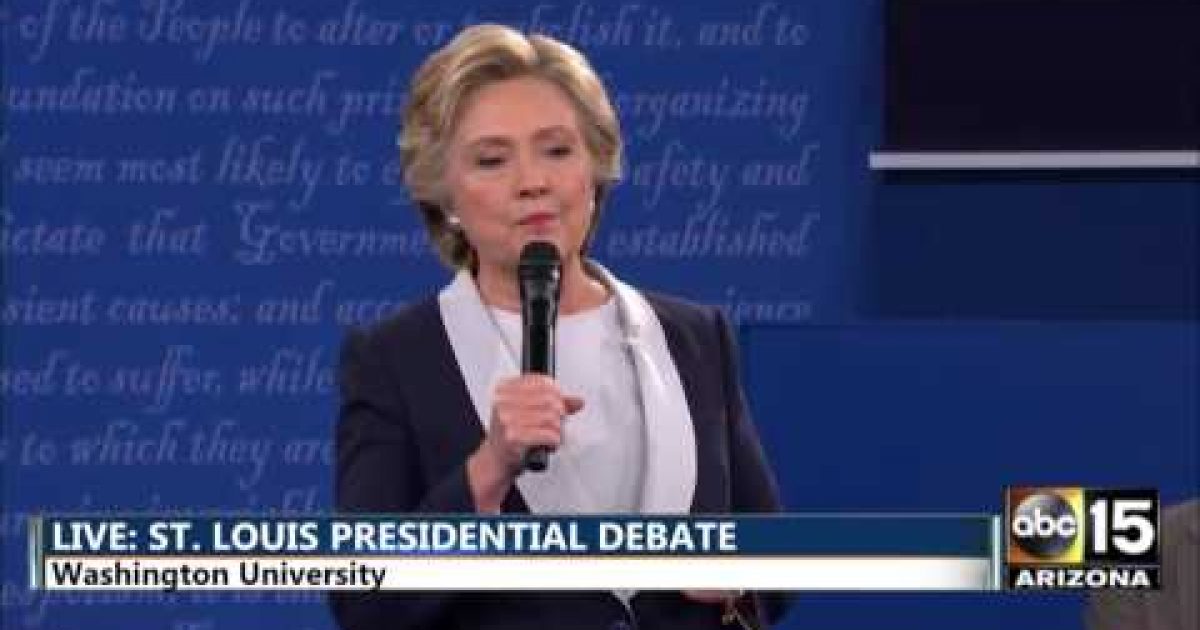 As people prepared to watch the Sunday evening debate there was an undercurrent that America was about to see something ugly, and perhaps it was but it was also very necessary. In the end the debate was as ugly as predicted, and Donald Trump may have done what was needed to right his campaign.

If there is any question about how Donald Trump handles pressure that was answered during the second debate. He faced greater pressure going into the debate than any candidate in presidential debate history.  He not only handled the pressure but was exceptional and won the second debate by a knockout.

In the first debate Donald Trump seemed to have missed every opportunity to go on the attack, Trump corrected that mistake in Debate number two. The two candidates threw everything but the kitchen sink at each other, and everything that Hillary didn’t throw, the moderators picked up an threw at Trump also.

It was interesting that the moderators began the debate with asking about the 800-pound gorilla in the room, the eleven-year-old audio where Trump said disgusting things about women. Yet Hillary’s scandal, the WikiLeaks release of parts of her Wall Street speeches was given a lower priority relegated to later on in the contest.

That eleven-year-old Trump video dominated the early stages of the debate. Anderson Cooper of accused Trump of bragging about sexually assaulting women, which Trump argued was a mischaracterization. The first few times Cooper asked about the tape, Trump expressed regret about his remarks and said he was deeply embarrassed about it, then pivoted to real issues like ISIS and crime. After the moderators asked about the tape three times, and Clinton had a go at it, the moderators picked a “civilian” question about the tape, making it four questions. That’s when Trump “went there,” talked about Bubba’s sexual assaults, and Hillary’s attacks on those women (three of they were in the audience, along with a woman who was a rape victim of a man Hillary defended in court then mocked years later)

Hillary Clinton attacked those same women and attacked them viciously. Four of them here tonight. One of the women, who is a wonderful woman, at 12 years old, was raped at 12. Her client she represented got him off, and she’s seen laughing on two separate occasions, laughing at the girl who was raped. Kathy Shelton, that young woman is here with us tonight.

The presence of the four Clinton victims seemed to throw Hillary off a bit. But it was this exchange that really threw her back on her heels.

Hillary Clinton said Trump should apologize for birtherism, and Trump pointed out that birtherism began with Hillary’s buddy Sid Blumenthal, and then segued into talking about the deletion of Hillary’s emails after receiving a congressional subpoena promising if elected he would appoint a special prosecutor to investigate her emails and other lies. That’s when to use a boxing term, Ms. Clinton stuck her chin out.

CLINTON: … I told people that it would be impossible to be fact-checking Donald all the time. I’d never get to talk about anything I want to do and how we’re going to really make lives better for people.

So, once again, go to HillaryClinton.com. We have literally Trump — you can fact check him in real time. Last time at the first debate, we had millions of people fact checking, so I expect we’ll have millions more fact checking, because, you know, it is — it’s just awfully good that someone with the temperament of Donald Trump is not in charge of the law in our country.

TRUMP: Because you’d be in jail.

Ouch, that had to hurt.

Donald Trump’s highest moment when he held Hillary liable for her emails and called for a special prosecutor. #debate pic.twitter.com/V4eEIjnMlG

When asked about her speech to Wall Street where she implied that politicians needed to be two faced, Hillary in part,” As I recall, that was something I said about Abraham Lincoln after having seen the wonderful Steven Spielberg movie called “Lincoln.” It was a master class watching President Lincoln get the Congress to approve the 13th Amendment. It was principled, and it was strategic.”

Again she left herself open for a Trump jab.

WikiLeaks that just came out. And she lied. Now she’s blaming the lie on the late, great Abraham Lincoln. That’s one that I haven’t…

A question about his 3AM tweet about the former Miss Universe Hillary used to attack Trump, he pivoted perfectly to Benghazi:

COOPER: The question is, is that the discipline of a good leader?

There were more, but those were the three best.  The bottom line is that Trump did what he had to (and what he didn’t do during the first debate). He put the 11-year-old tape aside and discussed issues even more than Hillary. And in the meantime he was able to throw in a few great zingers.  I predict that the “you’d be in jail” line will be shown for years to come.

Now we have to see how the voters see it. That will become apparent in another week or two.