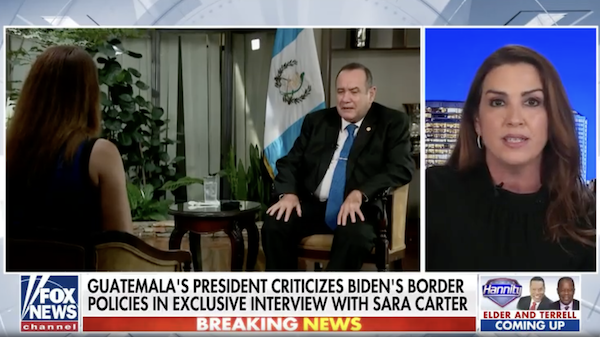 It’s obvious to anyone except those whose job is to set policy or are supposed to report on the facts — the border is an absolute disaster. Now we’ve got the President of Guatemala doing what the lapdog media won’t… publicly criticizing  Biden’s borders policy.  In an interview with Sara Carter for Hannity, President Giammattei says there is a border crisis of America’s (Biden’s) creation and makes suggestions about fixing it–stop the cartels.

The only way to see this policy as anything BUT a disaster would be to imagine that a wave of 100s of thousands of illegal entrants a month crashing into America would serve part of some ‘greater purpose.’

We already know what purpose that would be, thanks to when Democrat strategist Palmieri let the cat out of the bag in her leaked memo. (Dreamers ‘critical to electoral success, it said.)

Notice how this strategy doesn’t serve the country’s benefit at all, but illegal immigration does serve the long-term ambitions to the power of the political left. If we actually had an honest press, they would address that obvious conflict of interest.

We’ve had people on the right denouncing Democrats and their dangerous, destabilizing border policy for years. Predictably, it’s dismissed with the boilerplate accusation of any objections rooted in ‘racism,’ ‘white supremacy, and how we are insufficiently respectful and appreciative of our neighbors to the South.

Now that Guatemala’s President is calling the same policy disastrous, insisting that Trump’s approach to immigration policy was, in fact, the right one, how will Kamala and the complicit media find a way to squeeze THAT into a standard ‘bigotry’ narrative?

Guatemala’s president says Joe Biden’s decision to try and reunite illegal migrants with their families in the US has helped trigger the ongoing border crisis.

Speaking to Fox News on Wednesday, Alejandro Giammattei also said he’d offered a solution to Vice President Kamala Harris by urging the US to work with him to prosecutor people smugglers.

Giammattei told Sean Hannity reporter Sara Carter: ‘You can see that humanitarian messages were used here by the coyotes in a distorted manner. –DailyMail

He explained that the family reunification pledge incentivized the coyotes to bring the children and teens into the US, with adults to follow after the fact. The coyotes heard their message loud and clear and build a business model around it.

As Charlie Munger once said, ‘show me the incentive, I will show you the outcome.’ The incentive, in this case, was set by the official platform of co-Presidents Joe and Kamala.

But don’t let the numbers fool you. Don’t be distracted by the inconvenient truths about all the people being raped, murdered, or sold into sexual slavery along the way. It is ‘NOT a crisis.’ Just ask her, she’ll tell you herself, punctuated with dramatic eye-rolls.

Giammattei continued, explaining that as a result of the policy, the ‘border filled up,’ not just with Guatemalans, but with people from all around the world.

‘That’s why we have suggested that the messaging be clear.’

Giammattei spoke as it was revealed border crossings had exploded 674 per cent in May 2021 compared to the same month a year previously, with 180,034 migrants recorded crossing into the US last month.

His swipe came after President Biden signed an executive order in February establishing the Family Reunification Task Force to reunite unaccompanied minors separated from their families and detained under the Trump administration.

…Giammattei, a former director of Guatemala’s prison service, said that Harris and Biden had initially been too welcoming to migrants.

He said the ending of Donald Trump’s hardline policies such as child separation and sending unaccompanied minors back across into Mexico had backfired. [emphasis added]

Biden has promised to reunite families separated during the Trump administration and to expedite processing unaccompanied minors who arrived at the border in the last few months.

However, a new report from Biden’s task force on reuniting families indicates that 2,127 children have ‘not yet been reunified’ with their parents.

The task force progress report submitted to the president last week shows only seven children have successfully been reunited since Biden took office.

That the child policy (and by extension the children themselves) are being exploited as a way to bypass US immigration law. The children will be let in…, and the Coyotes know this… and mom and dad will follow after to cash in on the ‘reunification’ promise.

We have already seen the wanton disregard for the lives and safety of the children in their ‘care.’

Giammattei said he has seen coyotes carry out ‘horrible acts’, and criticized the U.S. for not properly responding to the surge of migrants.

Do you know who else has been warning about the dangers this lax border policy has exposed to this country?  Below are a dozen of the border crisis stories covered on this site in just the past two months: