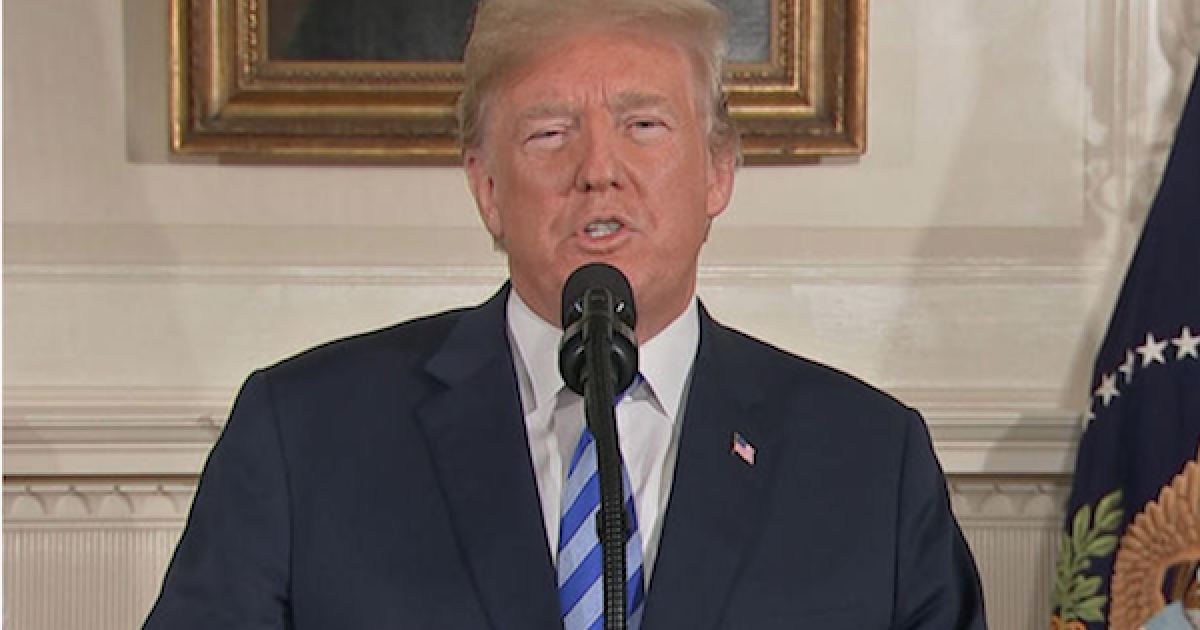 The President began his speech by outlining his issues with the Iranian regime. Indicting them as “the leading state sponsor of terror. It exports dangerous missiles, fuels conflicts across the Middle East, and supports terrorist proxies and militias such as Hezbollah, Hamas, the Taliban and Al Qaeda”

He also pointed out that Netanyahu’s presentation last week proved that Iran had been lying to the world about its history of pursuing nuclear weapons.

Trump emphasized that even if the deal was allowed to stand, Iran would be able to break out to a nuclear weapon very quickly.

“Making matters worse, the deal’s inspection provisions lack adequate mechanisms to prevent, detect, and punish cheating—and don’t even have the unqualified right to inspect many important locations, including military facilities”

In other words, no one can say Iran is compliant with the JCPOA, we don’t know if they are because not all of the important sites are allowed to be inspected.  Which was a point often made on this site, and that National Security Adviser John Bolton drove home the post-speech press briefing.

“Lifting the sanctions, as happened in 2015 as a result of the [Iran] deal, helps fuel the activity that Iran is undertaking now in Syria, its support for terrorist groups all around the region and the world like Hezbollah and Hamas. To really deal with this threat and try to bring peace and stability to the Middle East, and to relieve the world of the nuclear threat, you have to go after the whole thing. This is what he talked about with the European leaders and what we’re going to try to pursue.”

Trump reminded the world that the withdrawal, not a snap decision made without warning. He first announced in October 2017 that if the deal wasn’t changed the U.S. would withdraw. He repeated that warning in major January address. Therefore, time was up:

“In a few moments, I will sign a presidential memorandum to begin reinstating U.S. nuclear sanctions on the Iranian regime. We will be instituting the highest level of economic sanction. Any nation that helps Iran in its quest for nuclear weapons could also be strongly sanctioned by the United States. America will not be held hostage to nuclear blackmail. We will not allow American cities to be threatened with destruction and we will not allow a regime the chance death to America to gain access to the most deadly weapons on Earth. Today’s action sends a critical message. The United States no longer makes empty threats. When I make promises, I keep them.”

President Trump gave the Iranian despots a choice, “You can have a nuclear weapons program or you can have a functioning economic system. One or the other, but you can’t have both.”

The entire sanctions regime is not being completely imposed immediately. For now, it only bars new business deals with Iran.

While our European allies are disappointed in President Trump’s decision. Their motivation for remaining in the JCPOA has less to do with any feeling that the deal will prevent Iran from going nuclear and more to do with the fact that their local companies are doing billions of dollars of business with the Iranian regime.

President Trump ended his speech by extending the hand of friendship to Iran and the Iranian people much in the same way he spoke about North Korea when he was applying maximum pressure.

“Iran’s leaders will naturally say that they refuse to negotiate a new deal. They refuse and that is fine. I probably would say the same thing if I was in their position. But the fact is they are going to want to make a new and lasting deal, one that benefits all of Iran and the Iranian people. When they do, I am ready, willing, and able. Great things can happen for Iran and great things can happen for the peace and stability that we all want in the Middle East. There has been enough suffering, death, and destruction. Let it end now. Thank you. God bless you.”

While Europe was displeased, some of our Middle East allies were very pleased.

Saudi Arabia the leading Sunni Muslim country celebrated the President’s announcement. Iran is a Shia Muslim country And has threatened the Saudi monarchy. The official announcement on State-owned Al Arabiya TV reminded the Saudi people, “Iran used economic gains from the lifting of sanctions to continue its activities to destabilize the region, particularly by developing ballistic missiles and supporting terrorist groups in the region.”

Israel’s reaction was no surprise. Prime Minister Netanyahu made a nationwide address immediately after the president’s speech. His praise was effusive, “President Trump made a courageous decision today, a correct decision, and if the nuclear agreement with Iran had remained in place within a few years, he would have allowed Iran to enrich enough uranium to produce a whole arsenal of nuclear bombs. (…) Therefore, we are very appreciative, I greatly appreciate, and with all of Israel, the firm decision of President Trump to block this bad agreement and stop Iran’s aggression.

Iranian President Hassan Rouhani also gave a TV address after the Trump announcement. He claimed he had ordered the country’s “atomic industry organization to be fully prepared for subsequent measures if needed so that in case of need we will start our industrial enrichment without limitations.”

Based on President Trump’s track record of using maximum pressure to begin a détente with North Korea, don’t be surprised if Tuesday’s speech isn’t the end of the JCPOA but perhaps the beginning of a brand-new deal that does what the JCPOA promised but didn’t achieve.