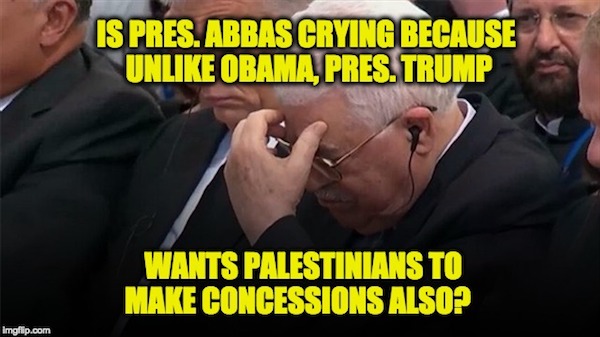 Here’s something we never heard during the anti-Israel Obama administration, world began to filter out over the weekend that after meeting with Jared Kushner in Ramallah last week an angry Palestinian President Abbas, not used to a U.S. presidency making demands of the Palestinian side, accused the American delegation of favoring Israel instead of being a fair moderator.  Poor Palestinian President Abbas.  After eight years of Obama not asking him to make the even basic concessions to Israel, compromise has become such a foreign concept to him that when he met with the American delegation last week and was asked to stop inciting terror he got angry and accused them of siding with the Israelis.

Jared Kushner, senior adviser and presidential son-in-law to President Donald Trump, and Jason Greenblatt, the president’s special representative for international negotiations, visited Jerusalem and Ramallah last Wednesday to begin the peace process Trump called for during his trip to the region a month ago.

“The American delegation accepted the Israeli position on the issue of paying salaries to prisoners and painted it at the meeting as a means of encouraging terrorism and demanded that it be stopped.”

According to Israel Radio reported (quoting Arabic media) initially Kushner and Greenblatt demanded the Palestinians stop all payments to prisoners in Israeli prisons. When Abbas pushed back they softened their position, asking them to stop paying the approximately 600 terrorists serving life sentences for murdering Israeli citizens.

London-based Arabic Newspaper Al-Hayat reported added that other issues brought up by the U.S. delegation included Abbas’ refusal to condemn the Palestinian terrorist who stabbed Hadas Malka a young female Israeli Police officer to death outside the Damascus Gate in Jerusalem. The paper also reported the American team protested that Abbas would not meet with the American ambassador to Israel David Friedman because of earlier support for new community construction in Judea and Samaria.

The day after the meeting Palestinian Authority Chairman Abbas’ Spokesman Nabil Shaath read a speech by Abbas that claimed the Palestinians have a “social responsibility” to offer monetary payouts to the families of prisoners in Israeli jails because they are “political prisoners,” and that the payouts are the PA’s way of “looking after innocent people affected by the incarceration or killing of their loved ones as a result of the military occupation. When the international community has an opportunity to move forward with a final status agreement between Israel and Palestine, the governments of Mr. Netanyahu find an excuse to avoid discussing the key issues,” according to the speech read by Shaath and, “the most recent pretexts include incitement and social aid provided to the families of Palestinian political prisoners”

One of the Palestinians favorite methods of deflecting criticism is to accuse Israel of the things they’ve been accused of and their follow-up to the Kushner meeting was no different. Palestinian negotiator Saeb Erekat said it’s  Israelis who are inciting terrorism.  Erekat claimed, “Incitement and glorification of terror have been a longstanding policy by this extremist [Netanyahu] government,” He accused Israel of trying to, “deviate attention [from the stalled peace talks] by inventing new excuses, such as allegations of incitement.”

Apparently, Abbas was also upset because the Americans did not mention the issue of Israeli construction beyond the 1949 armistice lines. Understand that this an issue, but not a major issue in the conflict until the Obama administration made it one in 2009. During the Bush administration there were negotiations between Israel and the Palestinians despite construction of new housing units in existing communities. But once President Obama and Hillary Clinton made demands that Israel cease all construction it gave the Palestinians an excuse to avoid negotiations.

Per the Palestinians, Kushner refused to talk about the construction issue. “They began by presenting Netanyahu’s claims,” a Palestinian source claimed.  He said that Abbas asked the Americans about their position on major construction projects over the Green Line recently announced by Netanyahu, “the core issues of the conflict,” but didn’t get any answer. “We told the Americans that the settlements were the source of the despair and terror because they remove any future hope for Palestinians to live in their own land.”

Abbas should not have been surprised at the American position on incitement. After the U.S.  President returned from his Middle East trip in May, an American source told Israel’s Channel 2 that an angry Donald Trump yelled at Abbas during their talks because of the Palestinian Authority’s continued incitement against Jews and against Israel.

“You tricked me in DC!” the President was reported to have hollered at the stunned Palestinian, “You talked there about your commitment to peace, but the Israelis showed me your involvement in incitement.” The source told Channel Two that Trump’s anger was followed by several minutes of shocked silence from the Palestinians–the meeting was very tense before the two sides managed to get back on track.

After that May meeting with Abbas the President gave a speech that referred in part to the incitement, “Peace can never take root in an environment where violence is tolerated, funded and even rewarded.  We must be resolute in condemning such acts in a single, unified voice”

Under the Trump presidency Israel will not always get what they want, for example the administration has asked the Israeli government to stop construction. However, this President will not attempt to de-legitimize the Jewish State by demanding one-sided actions and then criticizing her for not capitulating to the American demands.

The real message that the American delegation led by Jared Kushner to Palestinian Chairman Abbas was a silent one. There is a new sheriff in town and this one doesn’t hate Israel like the previous sheriff .