Classless Liberals: POTUS and FLOTUS Booed And Harassed As They Paid Respects To RBG 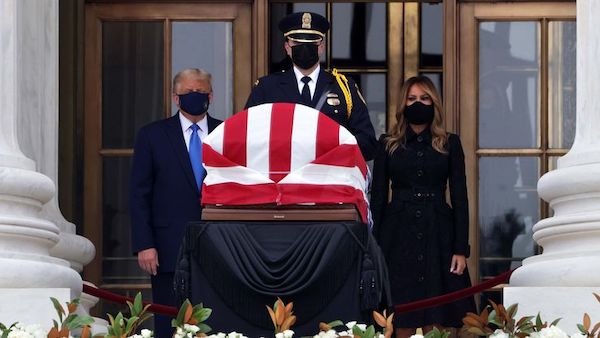 President Trump and First Lady Melania appeared on the porch of the Supreme Court, where Ruth Bader Ginsburg’s body lay in state, both sporting masks and heads bowed in a show of respect. And rather than everyone just setting aside politics for a moment and mourning together, folks gathered at the barricades below and began screaming and shouting at them. POTUS and FLOTUS booed

“Vote him out!” and “Honor her wish!” were common refrains heard from the crowd. As soon as the noise started up, the pair quickly turned and left, heading back to the presidential motorcade.

Honor her wish? This is the Supreme Court of the United States, not the Make a Wish Foundation. If it was the Make a Wish Foundation, she would have been sent to Disney World with a star like Marie Osmand. Truth be told, we don’t even have proof that was her dying wish.  Maybe her dying wish was that her cancer went away and she got twenty more years of a pain-free life. That’s what my dying wish would have been.

JUST IN: Pres. Trump arrives at the Supreme Court to pay respects to judicial icon Ruth Bader Ginsburg, as onlookers shout "Vote him out!" https://t.co/24QeUyEDzK pic.twitter.com/DqJAKbqY5B

The fight to replace Ginsburg has already become a heated partisan issue, with many Democrats demanding that Trump and Senate Republicans honor what was reportedly Ginsburg’s “most fervent wish” that she not be replaced until after the inauguration.

Earlier this week, even a ceremonial resolution introduced by Republicans intended to honor the late justice became a point of contention after Senate Minority Leader Chuck Schumer (D-NY) attempted to slip in an amendment about the alleged dying wish, which Trump has speculated was actually written by Democratic leadership to be used as an emotionalized political bludgeon. Sen. Ted Cruz (R-TX) blocked the amended resolution.

Despite furious opposition from Democrats, Trump said he plans to name a new Supreme Court justice nominee on Saturday after funeral ceremonies for Ginsburg are over. He has vowed to name a woman, and many speculate that he intends to nominate Judge Amy Coney Barrett, a conservative Roman Catholic.

Chants of “Vote him out!” and “Honor her wish!” outside the Supreme Court as the president arrives pic.twitter.com/lys9EqBuNs

The liberals have so deeply fractured this country along political and racial lines, it makes you wonder if there’s any hope at all for us ever being united together as one people again.   Extreme liberalism has brought out the tribal nature in humanity, causing us to focus on our differences and isolate ourselves by groups, rather than attempting to find our shared commonalities and identifying with each other in our humanity as no one is allowed to disagree with their positions. Of course, civility is difficult to do when liberals extremists begin each conversation calling their political opponents names, like white supremacists, homophobes, misogynists, or other kinds of haters. Or we want to throw old people off cliffs, take away their health care, dirty their water and oxygen, etc.

We can only hope that one day, the liberals will stop the nastiness and come together with the people who disagree with them in an honest discussion on issues without the venom. The treatment of the POTUS and FLOTUS as they tried to honor RGB was proof that day is not today.