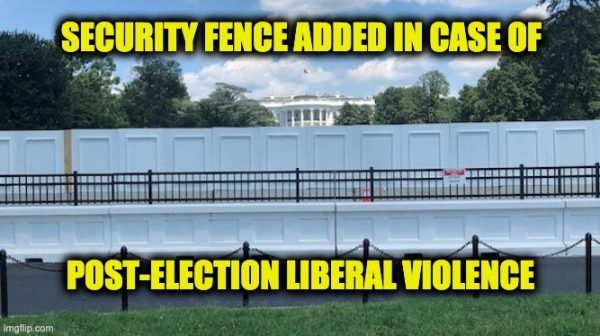 It’s been an open secret that political agitators are gearing up for any outcome that does NOT point to a clean win for Joe Biden. They have no intention of playing nice. post-vote rioters

On the upside, such people are being afforded an early meet-and-greet with their future landlords, so to speak.

That’s right, federal prison guards are among the people being mobilized to anticipate and shut down any attempt by would-be revolutionaries to, in their own words, ‘make cities ungovernable’.

It’s tough for a movement to stir up trouble when your leaders find themselves sitting in a prison cell awaiting federal sentencing.

If they’re counting on the soft-touch ‘catch and release’ attitude seen in Antifa-friendly places like Seattle and Portland, they are in for a rude awakening.

The personnel listed have tactical experience in dealing with prison disturbances. They are listed as hailing from SORT, BOP’s Special Operations Response Teams, or DCT, its Disturbance Control Teams. Many of the prisons where the listed officers work have active COVID-19 cases, raising the prospect of a coronavirus spread off of any deployment.

The document itself does not list where the prospective deployment is headed. But a knowledgeable congressional source said that senior Justice Department officials had requested BOP assemble a list of personnel that could be ready to go to Washington, D.C., for “issues related to the election.” Another congressional source familiar with the preparations corroborated that BOP might send others “after the election.” –DailyBeast

Being a leftist site, the reporting in that story is predictably filled with hand-wringing.

But for those of us who, unlike Chris Cuomo, do NOT see any place in civilized society for Violent protesting, nor Constitutional protections for it, we welcome some tough-as-nails SOBs who know a thing or two about putting down prison riots and get to put their skills to use while shutting down a would-be insurrection with non-lethal force.

The irony the Daily Beast cannot quite wrap its (collective) head around is that if America were really the hell-hole the left claims it were, OR if we were already the kind of country the radicals are trying to refashion America into, there would be no need for prison guards and non-lethal force.

Such a ‘demonstration’ may be met with soldiers and live rounds.

Horrifying scenes in Washington DC before the election. Democracy in crisis. #antifa pic.twitter.com/ekG2oPTbGP

Fair warning to future lawbreakers: the writers here at Lidblog.com are NOT the only people thinking that anyone who tries to use our own restraint as a shield for their vicious lawlessness needs to be dropped in a cell for a long time to cool their heels.