WATCH: Portland BLM Thugs Beat The Crap Out Of White Guy After Forcing Him To Crash His Truck 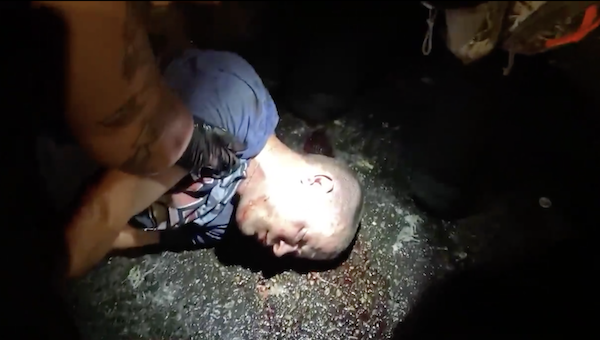 Saturday marked day 80 of nightly protests against “police brutality” and “systemic racism” in Portland, Oregon. These “peaceful protests” often get pretty wild at night and have been declared riots. This is precisely what happened on Saturday night.

On Sunday, more protests were scheduled for the afternoon, and, once more, it got out of control at night. A man who crashed his truck was violently assaulted by protesters:

A man appeared to have been punched and kicked unconscious by demonstrators just blocks away from a peaceful protest in Portland as unrest continued in Oregon’s biggest city.

Multiple videos posted online apparently showed the man sitting in the street next to a truck that he had been driving, which had crashed and come to a stop on a sidewalk Sunday night, news outlets reported. People were crowded around him and he appeared to have been punched at least once and later kicked in the head — knocking him flat.

The man was later loaded into an ambulance and taken to a hospital with serious injuries, Portland police Sgt. Kevin Allen told The Oregonian/Oregon Live. The truck was towed. It was unclear what exactly led up to the crash and the confrontation.

Portland Police issued a statement which said that at around 7 pm, peaceful protesters gathered and had speeches in Chapman Square and Lownsdale Square. The protesters were also blocking vehicular traffic.

At 10:27 pm, officers responded to an incident where a truck had crashed and the driver had been assaulted by protesters.

“The report said protesters were chasing the truck before it crashed, and they assaulted the driver after the crash. Officers encounters[sic] a hostile crowd and a squad from the Rapid Response Team (RRT) responded to help secure the scene while the investigation was underway. The driver was transported to the hospital by ambulance with serious injuries. The incident is under investigation and no arrests have been made.”

Drew Hernandez, a citizen journalist with a popular YouTube channel, Lives Matter, was on the ground in Portland and captured some absolutely shocking videos of the incident and what led up to it.

BREAKING: After causing a white man to crash his truck in downtown Portland, BLM militants then beat the man and knock him unconscious

1. BLM began to aggressively escort a man from the BLM protest then assaulted him

2. A witness defended him verbally, then BLM thugs began to threaten, rob and physically assault her pic.twitter.com/5kXPVNp0GA

Car smashed into tree and immediately after the man in the car was beating up by protesters. I literally just got dropped off when this happened. A couple blocks away from the federal courthouse #Portland pic.twitter.com/EcZDWUFFUW

BLM thugs were chasing the man down in his truck

Here are the moments shortly after the man crashes due to BLM harassment and before they knock him out in Portland pic.twitter.com/JcrJ5w3ty8

Another angle of the violent BLM interrogation of the driver who is detained and forced to sit on the ground. The man who later kicks his head curses at him and starts punching his face, which was already bleeding. #PortlandRiots Video by @FromKalen pic.twitter.com/BZKJgv6Vy5

This after the man has taken several punches to the face, the protesters continue assaulting him. #Portland pic.twitter.com/O1ESWb92yR

Here are more clips of the BLM militant assaulting the man who crashed his truck pic.twitter.com/o2cdleIs9c

Earlier: Rioters stand over the unconscious man’s body after they beat him. They pour water on him and shout in support of Black Lives Matter. Antifa street medics are examining him. He’s not responsive. #PortlandRiots #BlackLiveMatter Video @FromKalen. pic.twitter.com/aI5emSRATI

The victim was then shown bleeding from a large wound in the back of his head as he appeared unconscious throughout another almost 2½-minute clip. His wife was shown sobbing nearby as the mob held her back and appeared to rifle through his truck.

Police in riot gear had to assist ambulance crews helping him as they were confronted by “a hostile crowd,” Portland police said in a release.

The victim was taken to a local hospital with serious injuries, police said. “The incident is under investigation and no arrests have been made,” the force said.

I am currently attempting to find the status on the victim

After further investigation of the individuals involved in this attack, it is clear this was specifically a militant #BLM group that left the #BLM protest to intentionally incite violence tonight.

The attacker has been identified as Marquise “Keese” Love. https://t.co/JX4snImNtc

These “protesters” continue to insist that they own the streets. They keep chanting, “Whose streets? Our streets!” and they think that they can just control who can travel on them and when. Yeah, that’s not how this works.

This lawlessness needs to stop.