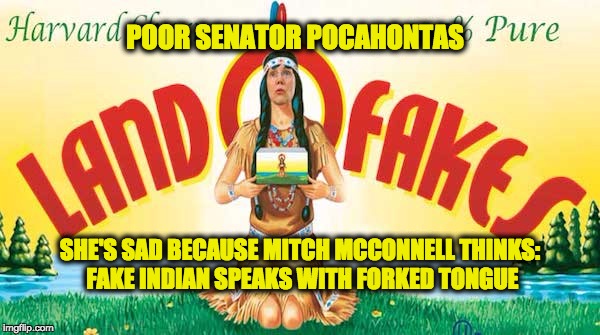 Elizabeth ‘Pocahontas’ Warren (D-MA)  has had a lousy week—polls continue to show her popularity slipping, and she was one of the few Democrats who bashed the use of the MOAB bomb in Afghanistan and very adeptly slapped for it by a Marine vet. Upon hearing about the strike Pocahontas ranted to the TV Cameras, “Where is the strategy??” Her answer came from retired Marine Gunnery Sergeant Jessie Jane Duff

Senator Warren: What is the strategy to bomb ISIS?

Perhaps the Cherokee-wannabe didn’t mean to strike out against the use of the MOAB. After-all we know she has been doubly upset lately…and not just because of her failing polls or that the Cleveland Indians lost to the Chicago Cubs in the World series, or even that Hillary Clinton lost the presidential election.

According to the Washington Examiner

Sen. Elizabeth Warren, D-Mass., says she takes every opportunity to say hello to Senate Majority Leader Mitch McConnell, R-Ky., but he has refused to speak with her since her notorious February battle with Republicans over the nomination of Jeff Sessions to be attorney general.

Warren was initially warned not to impugn another senator’s motives by Senator Steve Daines, the presiding officer during that debate. As Jeff Sessions was still a siting senator, Senator Pocahontas was violating Rule 19 of the Senate, which says in part, “No Senator in debate shall, directly or indirectly, by any form of words impute to another Senator or to other Senators any conduct or motive unworthy or unbecoming a Senator.”

When she complained, Daines said that he gave her a warning, and she should be aware of the rule. Warren kept reading but eventually Majority Leader Mitch McConnell interjected and said she has “impugned the motives and conduct of our colleague from Alabama.” He invoked Rule 19, and Daines basically told the fake Pocahontas to shut up and sit down.

Apparently ever since Senator Elizabeth ‘Pocahontas’ Warren made a personal attack against Jeff Sessions on the senate floor, Mitch McConnell has treated Senator Pocahontas like Senator Pariah

The progressive senator spoke about her experience with McConnell in an interview with the Boston Globe, while promoting her upcoming book “This Fight Is Our Fight.” The book reportedly ends right before Republicans voted to silence her during the debate over Sessions nomination. A move that was backed by McConnell.

The action gained nationwide attention, resulting in an outpouring of support for Warren. According to Warren, hard feelings led McConnell to stop speaking with her.

“I’ve spoken to him, but he has not spoken to me,” Warren said. “I say hello to Mitch every chance I get, and he turns his head.”

Can we blame him? Perhaps he doesn’t like the fact that she lied about having a Native American background to score a Job at Harvard. Or maybe because after the DeVos hearing every Democrat and Republican Senator shook Betsy’s hand except the classless Pocahontas who refused to shake her hand.  Or perhaps a bit of everything. Maybe Senator McConnell doesn’t want to say hi to Warren because she is not just a liar, but she has no class.

In the end it doesn’t matter because we all know that Senator Pocahontas speaks with forked tongue.