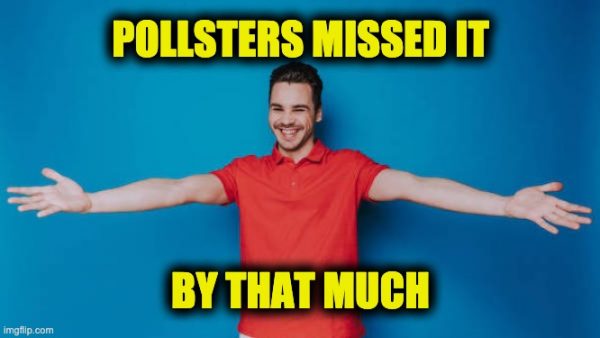 One of the Democrat’s favorite phrases since 2018 has been ‘voter suppression.’ Dems keep accusing us of things they are later shown to be guilty of… is this just another example? pollster John McLaughlin

The pollsters were wrong.

They weren’t even just a ‘little bit’ wrong. The numbers were off by more than they were in 2016.

Pollsters (almost) across the board got it wrong — with a few notable exceptions.

What drove this discrepancy? What can we chalk it up to?

For those of us looking on from the outside, it’s little more than a guessing game. But a professional pollster can dig into the data and have more informed conclusions.

The conclusions to which pollster John McLaughlin has arrived are chilling. He believes his fellow pollsters weren’t incompetent; they were crooked:

John McLaughlin, CEO, and Partner of the consulting firm McLaughlin & Associates said that many of the presidential polling firms deliberately boosted their poll numbers to suggest that Democrat Joe Biden was ahead of Republican Donald Trump in many states, all in order to suppress the vote of Trump supporters.

If Americans are told, over and over by the media that Biden is ahead of Trump in the polls, then many of those Americans may be discouraged and decide not to vote — what’s the point, if Biden is ahead?

…With the 2020 presidential race, “they went out of their way to under-poll Republicans because they knew that the president gets 90% of his support from Republicans,” said McLaughlin. “And if you lower the percent of Republicans in a poll – whatever your excuse is, you say its adults or just randomly using phone lists – you know you’re hurting the president.”

“You had major networks publishing polls with 24, 23, 25% of Republicans and exit polls from the last two presidential elections had 33%,” he said.

In an interview with John Solomon (on his podcast), he went deeper than that.

He pointed out that since mail-in votes had already been submitted (presumably by far more Biden supporters than Republicans), the Democrats were not the ones who would be influenced by these wildly inaccurate polls so much as Republicans, whose votes had not yet been cast.

It’s just one more data point in an election where very nearly EVERYONE in a position of influence was coordinating to take down a President who wasn’t willing to play by the rules THEY had agreed we should all be playing by.

How it all plays out, in the end, remains to be seen.