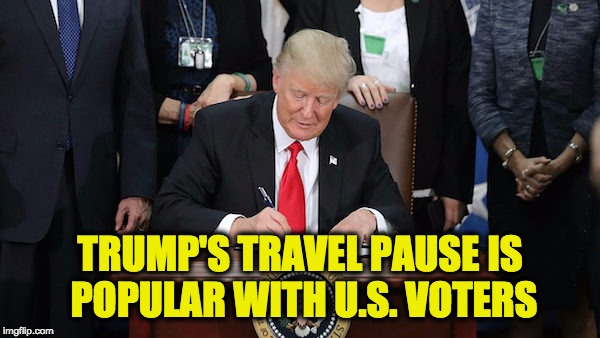 A poll executed by Morning Consult for Politico reports that 60% of Americans support President Trump’s travel pause. The voters were asked “whether they support or oppose the State Department’s ‘“new guidelines which say visa applicants from six predominately Muslim countries must prove a close family relationship with a U.S. resident in order to enter the country.'”  This is the first poll on the subject after the Supreme Court struck down the lower courts’ temporary restraining orders of the President’s executive order.

As one might expect Republicans strongly support the pause 84% to 9%, while independents support it 56%  to 30%, and while the Democrats oppose the 90 day pause, its not by a lot, 46% oppose vs 41% support. Apparently opposition to the travel pause is receding:

“Since we last asked about Trump’s travel ban, we’ve seen a drop in those who oppose the executive order,” said Morning Consult Chief Research Officer and Co-Founder Kyle Dropp. “Though, we’ve also seen an uptick in those who do not have any opinion on the matter or have yet to settle on one.”

Not all of the State Department’s definition of close family member is popular with the voters, the biggest objection is not including grandparents/grandchildren:

The travel pause is supported by all ages except the youngest (18-29) where only 47% support, and all ethnicities except African-Americans (only 42% support). Surprisingly in the West, where the court challenges against Trump’s order originated, 60% of voters support the President’s order. 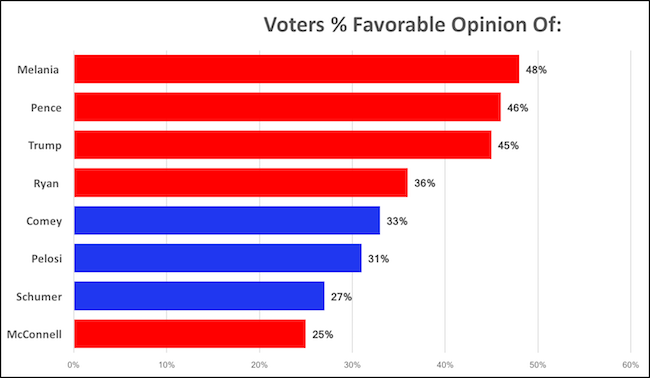 What it does indicate that the strategy of Democratic Party leaders Pelosi and Schumer, to rain hate down on President Trump is not working. Perhaps they should try working with the president rather than continue obstructing.

The full poll asks much more than the above (259 pages), therefore there may be more stories coming as it is digested.  Embedded below are the pages about the President’s travel pause.