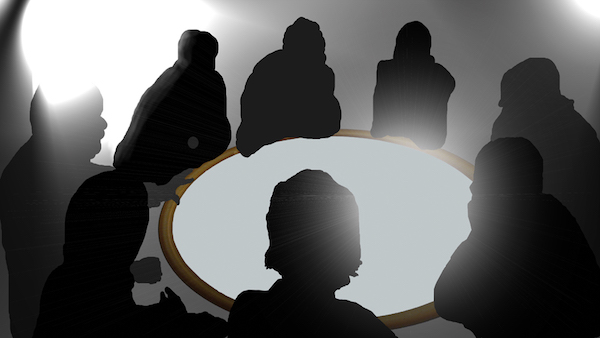 The MSM is trying to convince the country that Donald Jr. not only knew he was meeting with a Russian spy but also colluded with her to damage the Clinton effort. Soon they will probably claim that at the same Junior provided the Russkies some of America’s greatest secrets such as the ingredients to Colonel Sanders secret fried chicken recipe. But while they are trying to convince America that Donald Trump Jr. provided the Russians with Coca-Cola’s long-guarded “secret formula” known as  “Merchandise 7X,” which is locked inside an Atlanta vault, they’ve ignored the Politico exclusive about the Clinton campaign’s serious collusion with the government of Ukraine to destroy Trump’s candidacy which ended up costing then-campaign manager Paul Manafort his job.

Remember the “scandal” about Paul Manafort’s ties to Ukraine that got him fired from Team Trump? Guess how that got to the Press?

The Ukrainian efforts had an impact in the race, helping to force Manafort’s resignation and advancing the narrative that Trump’s campaign was deeply connected to Ukraine’s foe to the east, Russia. But they were far less concerted or centrally directed than Russia’s alleged hacking and dissemination of Democratic emails.

Over and above the Manafort sabotage, Ukrainian government personnel “tried to help Hillary Clinton and undermine Trump by publicly questioning his fitness for office” and  “disseminated documents implicating a top Trump aide in corruption and suggested they were investigating the matter, only to back away after the election.” The also helped with the traditional Clinton opposition slanders by aiding friends of Hillary research damaging information on Trump and his advisers.

The Politico report identified  Ukrainian-American political operative Alexandra Chalupa, who was consulting for the Democratic National Committee as the contact to the Ukrainian officials.  Oksana Shulyar, one of Ukrainian Ambassador to the U.S. Valeriy Chaly’s top aides was the point person on the foreign agent side.

“Andrii Telizhenko, who worked as a political officer in the Ukrainian Embassy under Shulyar, said she instructed him to help Chalupa research connections between Trump, Manafort and Russia, Oksana said that if I had any information, or knew other people who did, then I should contact Chalupa,’ recalled Telizhenko, who is now a political consultant in Kiev. ‘They were coordinating an investigation with the Hillary team on Paul Manafort with Alexandra Chalupa,’ he said.”

And according to Politico their efforts were successful: 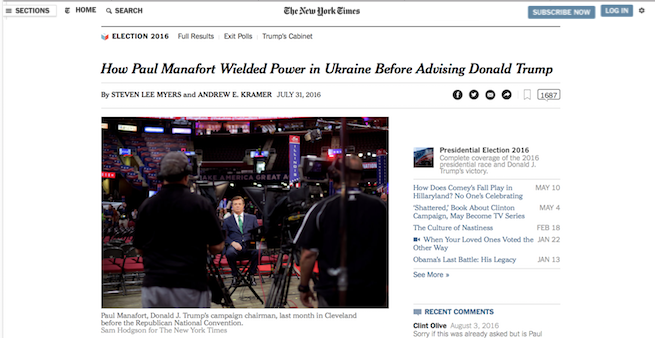 One of the more damaging Russia-related stories for the Trump campaign — and certainly for Manafort — can be traced more directly to the Ukrainian government.

Documents released by an independent Ukrainian government agency — and publicized by a parliamentarian — appeared to show $12.7 million in cash payments that were earmarked for Manafort by the Russia-aligned party of the deposed former president, Yanukovych [Manafort was a consultant for Yanukovych].

The New York Times, in the August story revealing the ledgers’ existence, reported that the payments earmarked for Manafort were “a focus” of an investigation by Ukrainian anti-corruption officials, while CNN reported days later that the FBI was pursuing an overlapping inquiry.

By the time the Politico released the report, the Ukrainian  government was scrambling to make nice with the new President elect. Poroshenko was among the first foreign leaders to call to congratulate Trump. During the transition however, Trump officials treated the Ukraine outreach as if they had a disease. Certainly those involved with repairing the relationship with the candidate they worked so hard to defeat, felt they were being ignored.

But six months later there seems to be a thaw. The past weekend, Secretary of State Tillerson embarked on his first official visit to Ukraine, The American promised that the United States would explore ways of changing the status quo in the Ukraine crisis.

In a way the MSM it has been proven that one of the campaigns colluded with a foreign country, it’s just that the campaign wasn’t Trump’s and the country wasn’t Russia. And the collusion was much worse than the Trump Jr. accounts the MSM are obsessing about. Not that one would know based on the MSM reports.