The Politico Israel Spying On Trump Story Is Nonsense 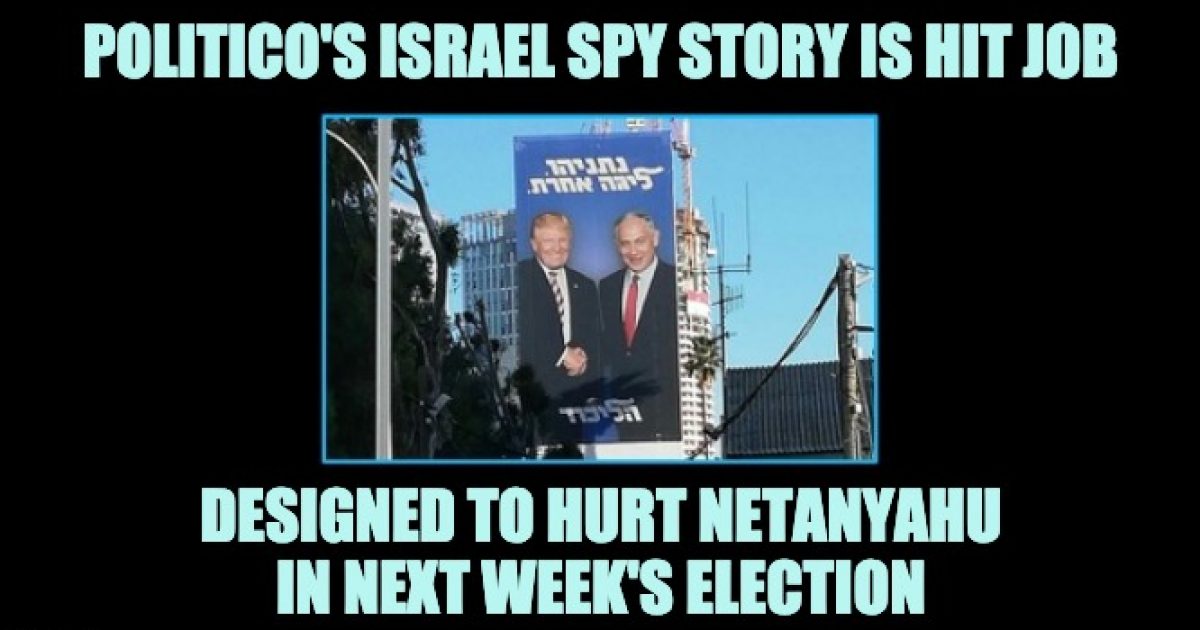 Yesterday, Politico published a story that “three former senior U.S. officials with knowledge of the matter” claimed  the “U.S. government concluded within the past two years that Israel was most likely behind the placement of cellphone surveillance devices” called StingRays “that were found near the White House and other sensitive locations around Washington.”

Along with the fact that both Trump and Netanyahu have denied the story, the Politico article is full of holes.

I would suggest that the story is not only nonsense but part of a liberal attempt to defeat Binyamin Netanyahu in next week’s Israeli election as one of Netanyahu’s selling points to the Israeli public is his relationship with Trump. This story suggests that the Israeli Prime Minister is not as close to President Trump as he contends.

The U.S. and Israel are extremely close allies, and that relationship has grown closer since President Trump took office. Intelligence is shared between Washington and Israel as the nations confront common enemies in the volatile Middle East and terrorists across the world. Netanyahu and Trump have been close friends for over thirty years. There is no need for Israel to risk that friendship by spying on the Trump administration.

It also goes against Israeli policy, as the Prime Minister’s office stated in response to the Politico article. “There is a longstanding commitment and a directive from the Israeli government not to engage in any intelligence operations in the US. This directive is strictly enforced without exception.” The operative words of that statement is “in the U.S.” There were reports that Israel was listening in on the negotiations for the JCPOA in Vienna. While the stories were never proven to be true, I don’t doubt them.  Iran was and is an existential threat to Israel, and the administration of Barack Obama was hostile to the Jewish State of Israel.

“The Israelis are aggressive intelligence collectors, but they have sworn off spying on the U.S. at various points and it’s not surprising that such efforts continue,” said Daniel Benjamin, a former coordinator of counterterrorism at the Obama State Department and now director of the John Sloan Dickey Center for International Understanding at Dartmouth.

But it may not have been an Obama employee. It’s possible this claim came from Pompeo’s predecessor Rex Tillerson or some of his close staff. There was a significant disagreement between President Trump and Tillerson about Israel. Under the former oil executive the State Department issued reports blaming the victim (Israel) for Palestinian violence; whitewashing PA incitement and payment to terrorists murder Jews (an issue the President raised more than once when he traveled to the area in May); condemned Israel’s steps to fight terrorism  (and the Jewish communities in Judea and Samaria); doesn’t acknowledge that Jerusalem is in Israel (again against Trump’s policy); and supported false reports by the United Nations and anti-Israel NGOs. It wouldn’t shock me if Tillerson were trying to hurt Netanyahu.

StingRay is old technology, U.S. police forces have been using it since 2006 or earlier. In technology years, StingRay is ancient. If Israel were to mount an operation to spy on the pro-Israel Trump administration after eight-year of the anti-Israel Obama White House, there is no way they would use ancient technology which can be easily detected.  Israel is one of the leading sources of cell phone technology. In fact, it was at:

“Motorola’s Israel R&D center that Israeli engineers first developed original cell-phone technology. And Most of the technology in your mobile phone can be traced back to Israeli engineering. From the tool that guards your mobile identity to a new keyboard solution, Israeli expertise keeps your phone from getting bigger yet staying cutting edge.”

Israel using a StingRay to spy on Trump is like someone at Apple using a Commodore 64 and booting it up with one of those old AOL disks.

Granted she was quoting an unnamed source, but so was Politico.

Putting it all together, logic dictates that the Politico story offering no actual proof and relying in anonymous sources is false. And the timing, less than a week before what is expected to be a very close Israeli election is meant to hurt Netanyahu’s reelection chances. The Israeli Prime Minister, who is a friend of Trump, has a conservative philosophy, and was hated by Barack Obama is not a favorite of the American liberal media.

Mark Levin blames the story on Benny Ganz leader of the Blue and White party one of Bibi’s major opponents.