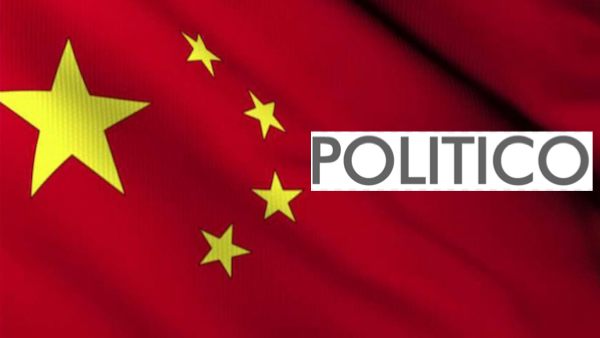 If they’re pushing Chinese propaganda, how are they NOT the “Enemy of the People” as Trump has claimed? Politico China propaganda

In an astounding piece of propaganda that looks like it came straight from Beijing, POLITICO promoted a piece praising the Chinese Communist Party’s handling of the coronavirus outbreak and blasting the Trump administration.

It is very clear that China bungled the response from the get-go, failed to warn the world, closed their own internal borders while allowing the virus to spread around the globe, and then lied and lied and lied.

Videos on social media showed the heavy-handed clampdown in China where people were forcibly quarantined.

Yet, POLITICO decided to praise the Chinese Communist Party’s response because President Trump choosing to embrace federalism and allow states to make their own decisions on how to handle reopening is just unpalatable to them.

They’d much rather have that heavy-handed authoritarian approach, I guess.

In the POLITICO article, the author cites comments from Weibo, the Chinese equivalent of Twitter, as proof that the Chinese people view President Trump’s handling of the outbreak as “disastrous” while China “outperformed” in their response.

Clearly, they’re not up to date on how the Chinese social credit system works. If only they had some reporters over there to look into that sort of thing…

Interestingly, the article states that Chinese propagandists can use American news sources and the fact that the U.S. had to purchase medical gear from China to push a positive, powerful view of China. The tweet promoting the article was just atrocious. It reads, “Trump is getting roasted on Chinese Twitter for his virus response, highlighting a broad verdict there: America disastrously faltered while China outperformed.”

Trump is getting roasted on Chinese Twitter for his virus response, highlighting a broad verdict there: America disastrously faltered while China outperformed https://t.co/GTjxnvCVuM

POLITICO was positively b-tch-slapped on Twitter for this outrageous statement.

This will be my go-to reply to all bad tweets I come across from this moment forward.pic.twitter.com/F1pqrpaZ7t

No. Just a bootlicker.

This guy must have agreed because he posted it also:

Curious what the Chinese (whose propaganda and disinformation you’re spreading here) would think of this night-club scene in Taiwan. pic.twitter.com/TQZCwcfGSr

Well, they do have tons of cash.

POLITICO, 1941: churchill is getting roasted on german twitter for his WW2 response https://t.co/I1P9FY9Ahz

I hope he told them that sometimes a cigar is just a cigar.

Here is precisely why running Chinese propaganda in the United States is dangerous.

Chinese operatives translate these stories and headlines and use them as propaganda to strengthen China’s regime.

Why would the liberal media spout propaganda from the Chinese Communist Party?

The same reason that the NBA was silent on the human rights abuses against the Uyghurs going on in China…the sweet, sweet lure of Chinese cash.

Chrissy Clark at The Federalist noted that the CCP has infiltrated quite a number of U.S. media outlets.

Despite the Chinese Communist Party’s (CCP) record of oppression, corporate media outlets are parroting the authoritarian government’s propaganda, even in the midst of an outbreak the CCP worsened through a cover-up. Many of those media outlets have financial ties to Chinese companies with intense oversight from the CCP.

“You often see representatives from American companies with financial ties to China naturally become defenders of the CCP’s policies and spreading the CCP’s propaganda,” said Helen Raleigh, an author and senior contributor at The Federalist who emigrated from China. “The financial tie means these Americans will be much less likely to challenge China’s human rights record or unacceptable demand such as technology transfer.”

We do not know the extent of editorial oversight from corporations and individuals with financial incentives to placate the CCP, if any. But we know the incentives exist, and that’s worth understanding.

China has bungled this from Day 1, and “Five Eyes” intelligence indicates that the novel coronavirus might have actually leaked from a lab in Wuhan rather than from the wet market nearby.

No matter how the virus began, one thing is perfectly clear–China lied about the human-to-human transmissibility of the virus, used the World Health Organization to spread their propaganda, and closed their internal borders while allowing travel in and out of China.

It really doesn’t matter if the source was lax protocols in a lab or a bowl of bat soup, the result is the same. The Chinese Communist Party let the virus spread just to save face, and they should be condemned for that, not praised.

Every single death around the world can be laid at the feet of the Chinese Communist Party.

This virus should really be called the CCP Virus–because that’s really what it is.

POLITICO should be ashamed of this propaganda piece.