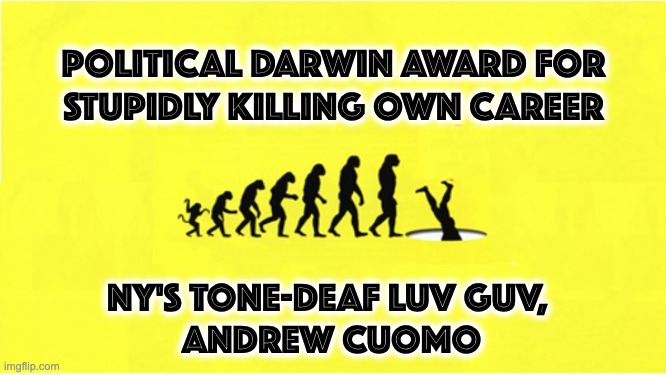 If there is ever a Darwin Award for politicians New York Governor Andrew Cuomo just earned himself the award—heck, he should probably get a lifetime achievement Darwin Award based on his handling of the CoronaVirus pandemic.

The Darwin Awards salute the improvement of the human gene pool by honoring those who achieve the pinnacle of stupidity by accidentally and spectacularly killing themselves most spectacularly. Like the guy who approached the open drawbridge in Louisiana, “lifted up the arm of the safety gate, then get back in while the driver backed up a bit and accelerated hard over the dra-bridge edge.” The car did not make it. The driver and passenger drowned as the car sank into the bayou.  They received the award because “You cannot live long if the road’s IQ is higher than your own. In this IQ test, our Double Darwin winners failed; indeed, they set a new low. Because these Texas Men–unlike the Blues Brothers–lacked “Cop Tires. Cop Engine. Cop Suspension, and a Mission From God.”

A political version of the Darwin Awards would not involve the death of the winner but would be given to the politician who says the most imbecilic tone-deaf statement at the worst possible time. Based on his latest statements, New York’s ‘Luv Guv” Andrew Cuomo should receive a lifetime achievement Darwin Award.

Cuomo has been in trouble thanks to sexual harassment charges and, most importantly, his COVID-19 executive order that lead to the death of thousands of senior citizens earning him the Twitter hashtag #CuomoKilledGrandma. When concerns regarding the nursing home deaths resulting from his order, the Luv Guv made some awful tone-deaf statements, perhaps the worst of which happened in May 2020. A reporter asked, “What would you say to families who have suffered losses inside nursing homes? His callous answer was basically old people die.

“Nobody was deprived of a bed or medical coverage in any way, And still people died. Still, people died. Older people, vulnerable people, are going to die from this virus. That is going to happen despite whatever you do.”

He left out the part about his order forcing them into nursing homes with a lack of the doctors and medical equipment necessary to handle a rash of COVID-19  cases instead of Hospitals. And that their presence in nursing homes led to the broader spreading of the pandemic than others states.

But as it is with most political mistakes, it wasn’t the mistake–it’s the cover-up. Last week, the New York Times reported that the effort of NY Governor Andrew Cuomo to cover up the extent of nursing home deaths was worse than previously thought.

But yesterday was Cuomo’s piece de resistance. His comment was so idiotic he earned a lifetime award. During a press conference, Cuomo urged people to get one of the COVID vaccines—there’s nothing wrong with that. But the words used by the governor who earned the hashtag #CuomoKilledGrandma were particularly insensitive and tone-deaf.

NY Gov. Cuomo to people who choose not to be vaccinated against COVID:

“Maybe you will get a long haul syndrome that we’re not really sure what it is yet, but a lingering consequence of COVID. Or maybe you go home and kiss your grandmother and wind up killing your grandma. So, show some civic responsibility.”

HOLY COW! Killing your grandma? Cuomo actually chose those words! Reports are that his nursing home death count could be as high as 15,000. As Andy Biggs (R-AZ) tweeted,” I mean, might as well get it from the leading expert on killing grandmothers.”

If someone establishes a Darwin Award for Politicians, NY’s Luv Guv, Andrew Cuomo’s insensitive handling of the COVID-19 pandemic should earn him a lifetime achievement award.