It’s Killing Comedy Will They Ban Laughter Next? 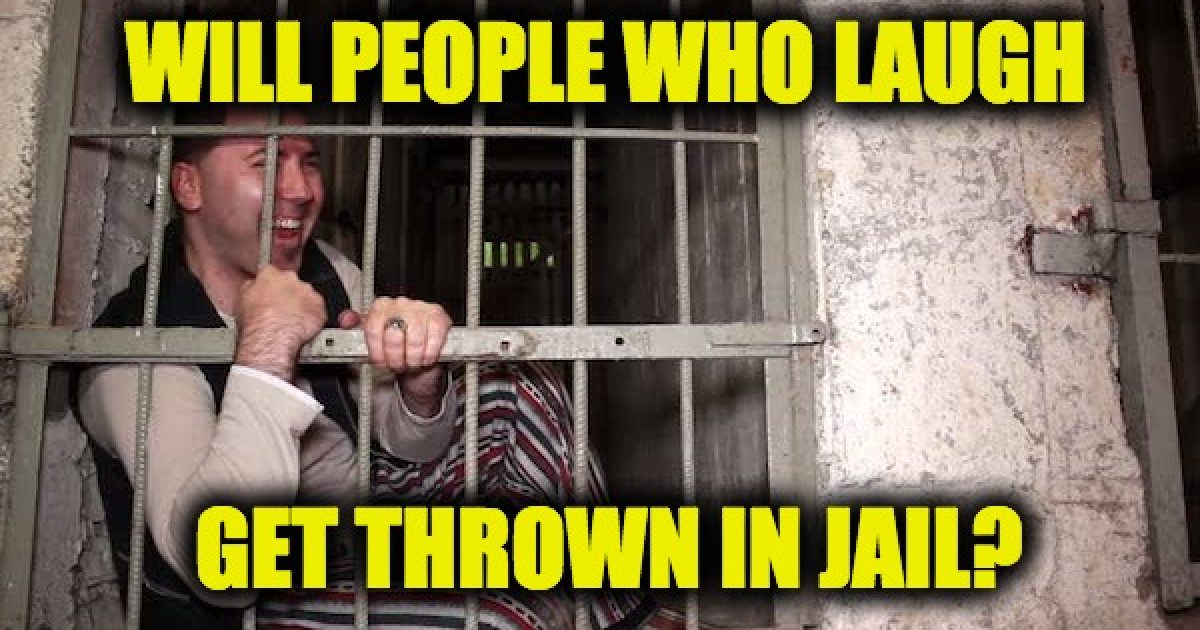 Will laughter be be banned? We know the PC Police are killing political discourse, but they’re also killing laughter. Recently Howie Mandel joined other comedians explaining that political correctness is killing comedy.

Mandel, now 62, is no conservative, of course, but he has had a long career in comedy having first started doing standup at the various comedy clubs in the late 1970s. By the 1980s his offbeat and sometimes mildly inappropriate style of comedy made him a frequent guest on TV. But today Mandel says he won’t do standup anymore because the PC Police have ruined comedy.  In fact, the “America’s Got Talent” host told TMZ  that comedy is dead.

“Comedy’s not fun, anymore,” Mandel said. Indeed, he even said he had “funny answers” for the TMZ folks but feared to say them for becoming the next entertainer whose life is ruined by PC outrage.

“It’s not fun anymore,” Mandel said with a shake of his head. “Comedy was fun. When I came out here, I couldn’t wait to hit the stage and try my wares, and step over the line and find out where the line is. Not anymore. Not fun!”

Mandel joins other famous comedians who claim political correctness is taking away our laughter. Like one of my all-time favorites Mel Brooks

“I like naked people, they are usually the most polite.”

Mel Brooks telling it like it is #r4today pic.twitter.com/GCPjMy5NU5

This is one of the tamest parts of Blazing Saddles, politically incorrect but unlike many of the other funny parts of the movie it doesn’t use the “N” word. Neither part would be allowed today:

Jerry Seinfeld has also railed against political correctness. During a 2015 ESPN interview, host Colin Cowherd mentioned to Seinfeld that Chris Rock and Larry the Cable Guy intentionally don’t perform at college campuses because the students are too politically correct.

“I don’t play colleges, but I hear a lot of people tell me, ‘Don’t go near colleges. They’re so PC,'” said Seinfeld.

He continued, “I’ll give you an example: My daughter’s 14. My wife says to her, ‘Well, you know, in the next couple years, I think maybe you’re going to want to be hanging around the city more on the weekends so you can see boys.’ You know what my daughter says? She says, ‘That’s sexist.’”

Seinfeld said college students don’t understand racism and sexism. “They just want to use these words: ‘That’s racist;’ ‘That’s sexist;’ ‘That’s prejudice.’ They don’t even know what the f—k they’re talking about

The comedian went even further when he appeared with Seth Meyers:

Gilbert Gottfried wrote about how political correctness hurt his career in an essay called “The Apology Epidemic” which originally appeared in Playboy and reproduced here. The essay said in part:

I know this from personal experience. I was on the receiving end of a Twitter crucifixion. For about a decade I was the voice of a duck on commercials for Aflac, an insurance company. I had one line—“Aflac!”—so it was hard to screw it up. It was a good gig. But then in 2011 a tsunami happened in Japan, and I made some jokes on Twitter the next day. “Japan is really advanced,” I wrote. “They don’t go to the beach. The beach comes to them.” And then I wrote this: “I asked a girl in Japan to have sex with me. She said, ‘Okay, but you’ll have to sleep in the wet spot.’” And then this: “I was talking to my Japanese real estate agent. I said, ‘Is there a school in this area?’ She said, ‘Not now, but just wait.’” I was on a roll.

For the next three days, every crazy person on the internet came out to punish me. They called me hateful names, screamed for my public execution, all because they didn’t like a joke. People were telling me, “Aren’t you aware of the tragedy and loss of life?” Yeah, I’m aware, and that’s where the joke comes from. Comedy and tragedy are roommates. Some people also claimed it was “too soon” to be making jokes. There’s this old saying: Tragedy plus time equals comedy. But I never understood why waiting makes a difference. A year later, I saw TV weathermen making jokes. “We’ve got lots of rain in the forecast. Tomorrow looks like a regular tsunami.” I was like, Oh, okay, I guess after a year a joke is a joke and no longer a crime against humanity.

I didn’t want to apologize, but I was persuaded that it might be a smart career move. So somebody typed one up for me. Here’s what it said: “I sincerely apologize to anyone who was offended by my attempt at humor regarding the tragedy in Japan. I meant no disrespect, and my thoughts are with the victims and their families.”

Another personal favorite, Larry The Cable Guy complained about Political Correctness to 60 Minutes. Interviewer Bob Simon said “There are some comedians who have accused you of being anti-intellectual, anti-gay, and racist,”

“Anti-intellectual! What the hell? They don’t know nuttin’. Not even, well, you know what? That’s I… I laugh that off. It’s stupid to even say that,” he replies.

“You joke about retarded people, which some people might find offensive. Are you tryin’ to be offensive there?” Simon asks.

Asked if he thinks political correctness in this country has gotten out of control, the comedian tells Simon, “It’s gotten way outta control. You know. I really think that we’re at a point in this country where people really need to take the thumb outta their mouth and grow up a little bit and realize there’s a lot bigger problems out there than what a comedian did a joke about.”

Larry got his revenge against political correctness with this version of The Night Before Christmas (the video quality is not great but the humor is):

Folks Howie Mandel, Mel Brooks, Jerry Seinfeld, Gilbert Gottfried, Larry The Cable Guy and so many other masters of comedy are speaking the truth, political correctness is killing comedy. If we don’t put our feet down and fight the politically correct nonsense, who knows one day laughter may be banned.

And don’t think it’s just modern comedy. Today’s PC Police would object to this Groucho song with an unusual description of a woman’s body originally performed in the movie “At The Circus”