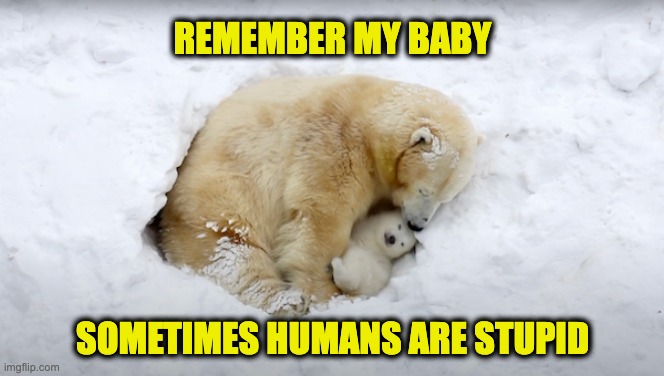 Over the New Year’s weekend, it felt like this ad was on my TV during every commercial break. The commercial was from the World Wildlife Foundation (WWF). It began with sad-looking Polar Bears walking on a small chunk of ice. Then came the sad part. “arctic sea ice is melting at an alarming rate. Without ice, mothers may struggle to find food and keep their cubs alive if we don’t act now, species worldwide could lose their homes forever.

The commercial says that if you donate $12/month to the WWF, you get a plush baby polar bear cub and a polar bear Christmas Tree ornament. My first reaction was, Gee, those moms struggle to find food for their cubs? Who thought that bears were hurt by Bidenflation like humans. But I eventually realized Polar bears aren’t affected by inflation.

But then three questions came into my mind:

One doesn’t have to be a scientist to realize the “arctic sea ice is melting at an alarming rate” can only be true if the sea ice is melting. Note, polar bears only live in the arctic, not the antarctic. I have don’t know why the bears aren’t living on the southern ice cap. Perhaps there is no internet, and the cable TV sucks. Therefore we will concentrate on the Arctic ice only.

First, in a peer-reviewed study, the University of Cambridge conducted research that reported:

The Arctic Ocean has been getting warmer since the beginning of the 20th century—decades earlier than records suggest—due to warmer water flowing into the delicate polar ecosystem from the Atlantic Ocean.

An international group of researchers reconstructed the recent history of ocean warming at the gateway to the Arctic Ocean in a region called the Fram Strait, between Greenland and Svalb

The University issued a press release that said in part:

“When we looked at the whole 800-year timescale, our temperature and salinity records look pretty constant,” said co-lead author Dr. Tesi Tommaso from the Institute of Polar Sciences of the National Research Council in Bologna. “But all of a sudden at the start of the 20th century, you get this marked change in temperature and salinity—it really sticks out.”

I have often posted that the models used to tie mankind to climate change were bogus and impossible to be correct. There is no way for the model designers to understand all the factors influencing Earth’s climate. And they start by basing their predictions on the computer models instead of what’s really happening. It’s as if they are saying it’s raining outside without looking out the window to see if it’s really happening. So far, the climate models about the Arctic do not consider that the Artic started warming much earlier than believed.

The models say the Arctic ice extent (a measure of all the ice in an area) is melting. In fact, in Dec.2008, before he complained to a masseur about his second chakra, former VP Al Gore used those climate models that the Arctic Ice Cap would be gone in five years. That didn’t happen—the ice cap part. Thankfully Marc didn’t send me research links about Al’s chakra. That’s the definition of TMI.

James Hansen, a former NASA scientist, is often called the “father of climate change,” based on the information he released from his throne at NASA. Hansen predicted, If the world continues with a ‘business as usual’ scenario..temperatures will rise by 2 to 3 degrees Celsius.

And on “that warmer planet, ice sheets would melt quickly, causing a rise in sea levels that would put most of Manhattan under water. Hansen used the old tricks of melting Arctic sea ice and a reduction in polar bear numbers to try and pile pressure on world governments: “It is not too late to save the Arctic, but it requires that we begin to slow carbon dioxide emissions this decade,”

Wow, that is scary—the guy worked for NASA. But if one does a little research, they learn Hansen’s work is ruled by one motto: “If God deals you bad numbers–fudge them.” Mr. Hansen has been caught reporting bogus numbers more than once.

What has happened since then? Is the ice melting, leading to starving baby bears? That’s not happening either. Depending on which study you read, Arctic ice extent has been rising or falling by a very tiny amount in recent years.

In July 2021, the Danish Meteorological Institute (DMI) revealed that temperatures ran below the average of the 2021 season. “Climate alarmists have their beliefs grounded in dogma –whether they know it or not– and this is the reason that their “tipping point” prophesies continue to uneventfully pass by, year after year, decade after decade.” These colder than average Arctic temperatures mean any losses in ice ‘extent” this year can only be attributed to other causes –such as wind direction/speed, etc.

Norwegian Data shows the September minimum trend has contradicted Al Gore’s predictions of an ice-free Arctic. Whether sea ice has turned the corner and will start a recovery still remains to be seen.

A paper by meteorologist Professor J. Ray Bates says Arctic ice extent may have decreased slightly, but they’ve been pretty stable for the past 15 years.   Stability is more than one can say about Green New Deal author Alexandria Ocasio-Cortez (D-NY), who believes that people who disagree with her do so because they want to date her.

A new paper by an eminent meteorologist says that trends in polar sea-ice levels give little cause for alarm. The paper, by Professor J. Ray Bates, has just been published by the Global Warming Policy Foundation.
According to Professor Bates, climate model simulations indicate significantly decreasing sea ice levels in both hemispheres, with the greatest decreases occurring in September each year. However, the observed September trend in the Antarctic is actually slightly upwards, and while observed levels in the Arctic have fallen over the last 40 years, they have been quite stable since around 2007.

Using data from the National Oceanic and Atmospheric Administration (NOAA), a U.S.governmet agency, ice extent has been up very slightly (+0.368%) during the past 14 years.

Putting this all together, we learn that humans will not be wiped out from rising seawater, and the polar bears won’t be wiped out because of melting ice.

Polar bears have been doing much better than the U.S economy since inauguration day.

Dr. Crockford reported that 8 of the 19 polar bear subpopulations, only two of which showed insignificant declines after very modest ice loss. The rest were either stable or increasing, despite significant reductions in sea ice. As a result, the global population of polar bears is now almost 30,000 – up from about 26,000 in 2015. For the population to grow that fast, the baby bears must be eating well (and male polar bears are getting lucky).

Polar Bear Science, a site whose editorial is 100% about polar bears, wrote, “Compared to last year, polar bear habitat at 15 December 2021 is way up in the Barents and Bering Seas but way down in Hudson Bay but nothing any polar bear has to worry about.”

An article by CNN in January 2021 buried this information in the 20th paragraph “Jon Aars, a senior researcher at the Norwegian Polar Institute: “Polar bears are optimistic animals,” Aars says. “It seems that they are quite resistant, and they are doing quite well despite the fact that they’ve lost a lot of their habitat.” Despite the odds, Svalbard’s polar bear numbers do not appear to have decreased in the last 20 years, he says.”

As for the third question, Marc didn’t have the answer, so I asked my wife, who said if the polar bear dads weren’t helping, the moms would have killed them–just like humans.

What I learned about question number one is who knows? But any change in arctic ice extent is tiny either way. As for question two, the cubs must be eating because the polar bear population is growing. And for number three, If I don’t watch the kids— it’s gonna hurt real bad.

Unless you really want a cute plush bear cub, I’d ignore the commercial and donate to a different organization.