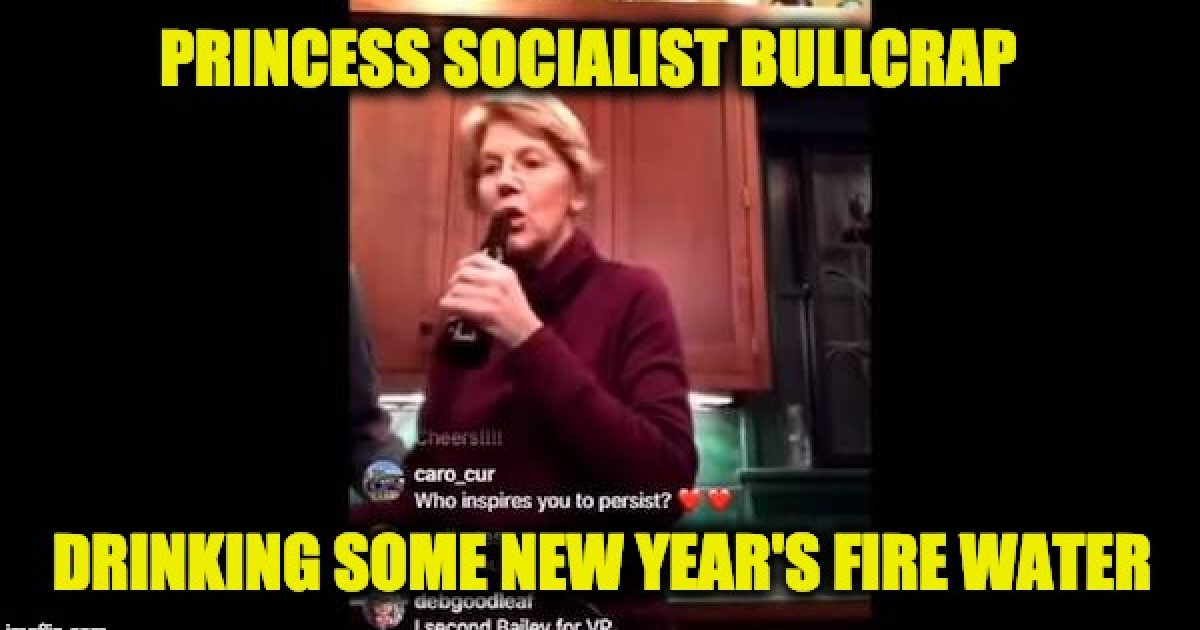 On Dec. 31, Elizabeth Warren drank beer and talked about her day in an Instagram live stream just hours after she announced she’s beginning her 2020 White House bid by forming an exploratory committee.    Who doesn’t want to share their New Year’s Eve with Pocahontas Liz drinking firewater and trying to act “cool?”

“I’m here in my kitchen, uh, and um, I thought maybe we’d just take some questions, and I’d see what I can do,”

She set up the camera in her kitchen and said she would take questions from followers. She tried to make it seem like a spontaneous outreach event. But If you believe that it was unplanned, I have a bridge in Brooklyn to sell you.

Warren detailed how she spoke with reporters outside her home and how she has received donations from people in all 50 states, D.C., and, Puerto Rico, according to Fox News

“It’s been kind of an amazing day. So, today, I, um, got up early this morning, and, uh, talked to a bunch of folks on the phone, and then went outside and talked to the press — and this is our house, and has been for a long time, and there are all these reporters, and trucks, and everybody outside the house.”

During the video, we even got to meet her “sweetie” Bruce.

The video below shows part of her video stream (full 13-minute video at end of post). But look closely when she drinks the beer, do you think she is swallowing? Was the beer empty?

We did learn about what she was going to do later that night. Apparently, they do the same thing every New Year’s Eve, they go upstairs and watch Casablanca. How romantic.

Beto O’ Rourke also did a live stream on New Year’s Eve. He streamed from an igloo he built earlier in the day.

Warren was trying to look “cool” like Beto O’Rourke and Alexandria Ocasio-Cortez.

The 2020 Dem primary is gonna be like a season of Top Chef America pic.twitter.com/cCni8gMC6m

I wonder if Corey Booker is going to do a live stream as Spartacus, or former SCHMOTUS Joe Biden will stream another one of his creepy hugs of a woman.

OH BOY, this is going to be a strange presidential campaign.