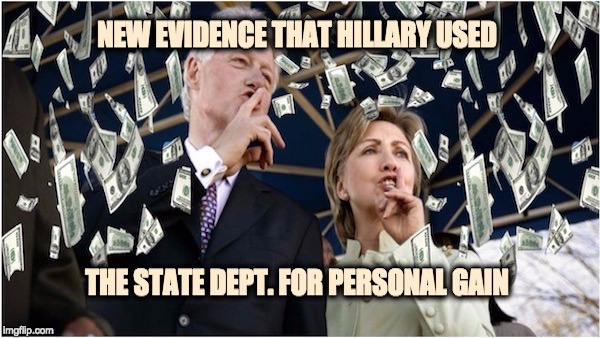 The Office of Bangladesh Prime Minister Sheikh Hasina claims that in 2011 the PM got a call from Secretary of State Hillary to pressure her to give Dr. Muhammed Yunus back his job as the head of Grameen Bank. At the same time the PM’s son who lives in the U.S. was threatened with IRS audit (or worse) if he didn’t try to convince his mother to give Yunus his job back.

Circa News is reporting:

While secretary of state, Hillary Clinton made a personal call to pressure Bangladesh’s prime minister to aid a donor to the Clinton Foundation, her husband’s charitable foundation:

The Office of Bangladesh Prime Minister Sheikh Hasina confirmed to Circa that Mrs. Clinton called her office in March 2011 to demand that Dr. Muhammed Yunus…be restored to his role as chairman of the country’s most famous microcredit bank, Grameen Bank. The bank’s nonprofit Grameen America, which Yunus chairs, has given between $100,000 and $250,000 to the Clinton Global Initiative.  Grameen Research, which is chaired by Yunus, has donated between $25,000 and $50,000, according to the Clinton Foundation website

“Former US Secretary of State Hillary Clinton telephoned Bangladesh Prime Minister Sheikh Hasina in March 2011 insisting her not to remove Dr. Muhammad Yunus from the post of Managing Director of Grameen Bank,” Deputy Press Secretary Md Nazrul Islam told Circa in an email.

Mrs. Clinton’s newly disclosed call to reinstate Dr. Yunus marks one of the most direct involvements in an official government matter that impacted one of her husband’s donors. It may trigger new calls for a criminal investigation into the foundation’s activities but “it’s not likely that anything would come of it,” said Richard Painter, former Chief White House ethics lawyer for President George W. Bush

“People in public life shouldn’t be raising money from anybody, anywhere, or for anything,” Painter said. “But until we fix the campaign finance system this is the way it’s going to be.”

Similar conflict of interest  “pay for play” examples can be found in Peter Schweizer’s book Clinton Cash, and other reports found on this site. For example, hen she was secretary of state, Clinton made deals with Clinton Foundation donors, one resulted in Russian control of 20% of American uranium reserves, another gave Putin access to our military technology.

Those declassified cables show the U.S. ambassador also raised the issue with government officials prior to Mrs. Clinton’s call and that Mrs. Clinton asked State officials to alert her husband to the problems Yunus was having with Bangladesh.

“Please see if the issues of Grameen Bank can be raised in a friendly way,” the email from Yunus to then Clinton advisor Melanne Verveer stated. “I sought an appointment with the Prime Minister to brief her on our problems, at the advice of the U.S. Ambassador in Dhaka.”

Prime Minister Hasina son  Sajeeb Wazed, who has permanent residency her in the U.S. claims that between  2010 and 2012 he was often threatened with IRS audit (or worse) if he didn’t ask his Mom to end the  his mother to end the investigation into Dr. Yunus.

“At two instances during those conversations they brought up the fact that, ‘look, there could be many actions taken against your country, your mother, your family, who knows, you could get audited by the IRS, since you live in the U.S.,” said Wazed, who has been making the allegations for over five years.

Circa informs us that allegations have not been independently substantiated and that representatives for Mrs. Clinton did not return phone calls seeking comment. But they do not seem out-of-place when one considers the research done by  Mr. Schweizer.