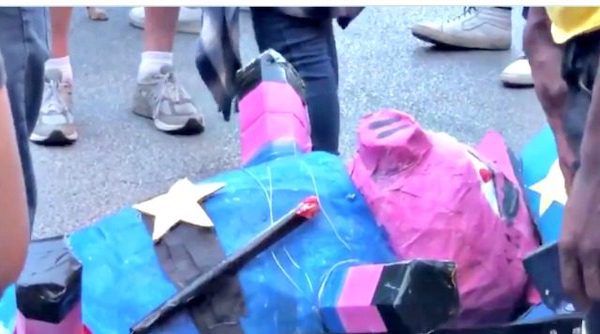 It started Saturday Afternoon— Black Lives Matter protesters took to the streets in Chicago Saturday to demonstrate by stomping on piñatas of pigs dressed as cops, and twerking to Cardi B’s explicit single “WAP,” several videos show. They congregated outside the Whitney Young Magnet High School, demanding the defunding of the police and removing school resource officers. The site was chosen because the Whitney Young High School board recently voted to keep Chicago Police Department officers present at the school.

The protesters were trying to dehumanize the Chicago Police Department who put their lives on the line to protect them every day. Some of the protestors were holding what appeared to be piñatas of pig heads wearing police hats on sticks.

BLM activists marching with piñata pig heads with what appears to be a symbol of blood coming out of the bottom of the pig head in Chicago pic.twitter.com/PZr3D0JeLQ

This wasn’t a matter of protesting a cop who did something wrong. These BLM protesters were protesting all cops, especially the ones who were keeping kids safe at school.

ALARMING: #BLM is marching through resedential neighborhoods in Chicago pointing at “white people” in their residences

They are also blasting loud music,

That doesn’t make tons of sense, harassing the public because of a crazy belief that cops are hunting down black people and ignoring that the cops are there at the protest making sure the protesters stay safe.

“This is our city, our city, and we’re taking that s**t back. Point. Blank. Period. End of discussion. We have demands and they need to be met and I feel like I’ve been saying this too much, we’re not asking you anything. We’re telling you what’s about to happen with your permission or not.

“I don’t wanna come out here again. I don’t wanna have to do this again. I don’t wanna take a day. I unfortunately was not at the action yesterday. I was actually taking a day between this organizing because it’s taxing work, because we are kids trying to grow up and I took a day to myself to wake up to find out that my friends are being abused by the f***in police! You can listen to us or you can get ran over. And that’s all I have to say.”

Sure this protest was non-violent (unless you are a piñata), but its message, cops are pigs, and they should be beaten, is one that will incite violence.

BLM celebrating over the severed body of a piñata pig symbolizing a police officer in Chicago pic.twitter.com/0V7N4Vs9v7

According to what the organizers of the rally told Chicago’s channel 5,  the goal of the protest was to persuade the city to spend less money in the police department and spend more in neighborhoods. But their methodology (intimidation) will convince the public that more police and police funding is needed.

Sorry BLM if you want your neighborhood, heck the entire city to be safe for you and your family, the only way to make that happen via the dedicated members of the CPD who put their butts on the line every day to protect the city.