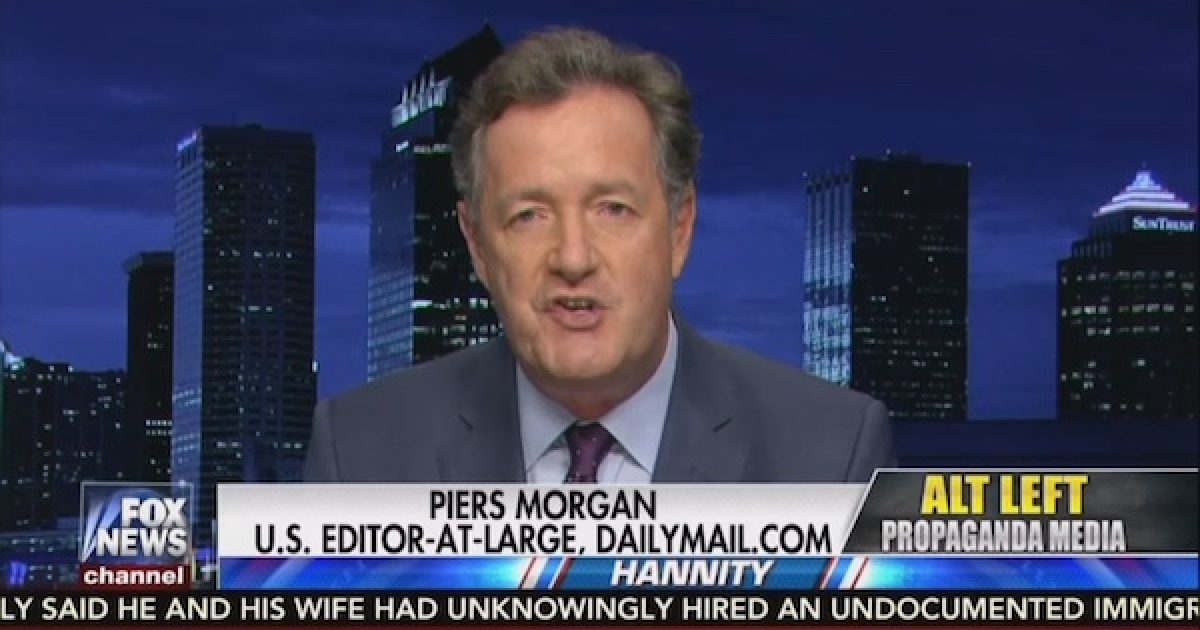 Piers Morgan was on FIRE during a recent visit to Fox News’ Tucker Carlson Show. The well-known liberal and former CNN host simply cannot understand why the American media is so focused on the possibility of Trump “colluding” with Russia when there is simply NO EVIDENCE that anything of the sort ever happened.

Morgan further argues that the media should be far more focused on the fact that the Obama administration, with all of its power and influence, failed to stop the Russians from interfering in the 2016 election.

Piers is radically liberal, we are talking about the man who once said, he believes the Bible and the U.S. Constitution are ‘inherently flawed’ and that the Bible needs an amendment changing its stance on same-sex marriage.

Morgan knows Trump better than most having won Celebrity Apprentice ten years ago, but that doesn’t stop him from criticizing the President publicly as he did this past November:

Good morning, Mr President @realDonaldTrump – what the hell are you doing retweeting a bunch of unverified videos by Britain First, a bunch of disgustingly racist far-right extremists?
Please STOP this madness & undo your retweets.

Morgan makes a series of really interesting points – but the most compelling has to be this idea that the media has focused on Trump (with no evidence that he did anything wrong during the election) while ignoring Obama, whose job it was to make sure that the election went off without a hitch. It’s a crystal clear example of the media’s bias against President Trump, and their blinding infatuation with President Obama. It’s really ugly.

Here’s what Morgan had to say:

It’s been one of the worst ever weeks for the FBI and its 198-year history. I will tell you why, two reasons. One, take the Russia investigation. Donald Trump is president of the United States now and has been for just over a year, but there remains zero evidence that says that he colluded with anyone from Russia in any attempt to fix the U.S. election. That’s just a fact. Now Mueller may have some secret evidence, but he hasn’t produced it. So right now there is no evidence linking Trump to any collusion.

So that then prompts the question: Well, okay, but we now know there was Russian meddling in the U.S. election, we don’t know quite the scale of it. It may be as Brit [Hume] just said, reasonably small and not that significant. But there was meddling, and you would expect that. But whose job was it to deal with that meddling, to stop it happening? Well, that would be the previous president, Barack Obama who from 2014 when the meddling started, it was his job, it was on his watch. And he has 17 intelligence agencies led by the FBI, and it is their responsibility, in my view, to investigate and to stop and to close down the kind of meddling that we saw from these Russians and that simply did not happen.

And so I would say that if you combined that performance by the FBI in terms of the Russian investigation or lack of it that was going on, and then you look at what happened with the mass shooting this week in Florida. This is one of the most spectacular ball drops that I’ve ever seen from any intelligence agency.

The FBI were warned twice. Once that this guy had apparently posted on a vloggers commentary that he was going to be a school shooter. He has a very unusual name, the shooter, Nikolas Cruz with Nikolas spelt in a very unusual name. The FBI were not able to trace him, and yet he had a background check to purchase an AR-15 with which he committed his crime. They could’ve found him in 5 minutes. Cut forward four months to the start of January, and then we have the most extraordinary situation where it turns out that somebody very close to Cruz, the shooter, phoned the FBI tip line specifically designed for tips about crime and potential crime and said that this guy is dangerous, he is heavily armed. We think that he may shoot up the school. They gave them chapter and verse on this bloke and the FBI didn’t even refer it to its head office in Miami. It did not even pursue this. Despite now having two warnings that this guy might be armed, dangerous, unstable, mentally ill, and prepared to shoot a school up. Now you put those two things together, Tucker, and I’m sorry, this is a pretty appalling performance by the FBI, leading me to conclude in my column today that you’d be better off calling them the Federal Bureau of Incompetence.

Of course, Tucker Carlson was in general agreement with what Morgan had to say. But Morgan’s comments lead Carlson to wonder why liberals would call Republicans “unpatriotic” for questioning how the FBI is doing their work?

Again, Morgan lambastes the left for coddling the FBI when it’s so obvious that they’ve done nothing but fail over the last year or so.

Well, it’s interesting, isn’t it? I think the partisan nature of American politics is so extreme, and it’s both sides to a large degree — certainly, the anti-Trump hysteria, in particular, means that people are not able to see the woods through the trees.

I come from another country, I look at this with a pretty clear and open mind. I wrote 36 columns about Donald Trump for the Daily Mail last year — 18 of them were supportive; 18 were critical. I’m a reasonably impartial voice in this debate. And I would simply say to all of those who don’t want any criticism of Barack Obama for what happened with the Russian meddling or with the FBI with the meddling or now in the investigation into the shooter, take a good long look at yourselves, because if this has happened with Donald Trump, let’s reverse it. Let’s say that Donald Trump had been the president when all of this meddling was actually going on, and we knew it was going on. There would be absolute outrage that he hadn’t stopped it.

So I think it is perfectly legitimate to look at Barack Obama and say, where were you when this meddling was happening on your watch? And the answer is that he and the FBI seemed far more exercised to be investigating other technology in terms of emails, Hillary Clinton, and servers, quite legitimately. But were they basically taking their eye off the ball and not focusing on what is probably for the American country far more serious, which is persistent Russia meddling through American companies like Facebook, Twitter, Google, and others, using and abusing them to try to influence and corrupt voter patterns and voting thinking.

And that’s the real issue here, isn’t it?

This is the proof of the media malpractice.

You simply cannot argue that the Russian meddling was a serious problem (which the Democrats have argued) without also blaming the Obama administration for not doing their job and for failing to protect the sanctity of our election. Either the Russian meddling wasn’t a big deal and the media has wasted more than a year on a non-story. Or the meddling was a big deal, and the Obama administration should be called out for their massive failures and their utter incompetence.

Sadly, the media doesn’t seem to care about doing their job honestly or logically.