PROOF! The 6 NGOs Israel Designated As Terrorist Are Linked To PFLP Murderers 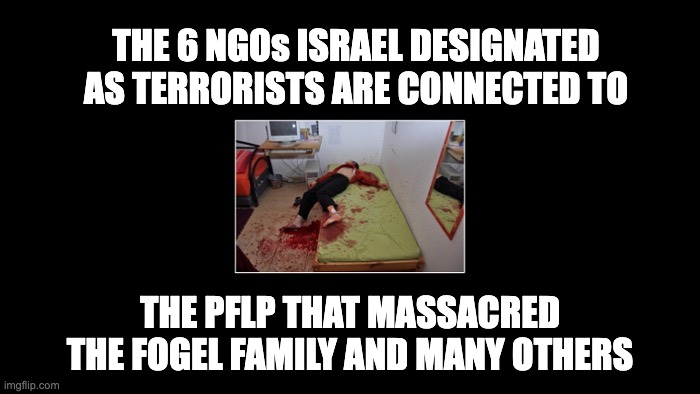 When Israel designated six non-governmental organizations (NGOs) who claim to be human rights organizations, as terrorist groups, many leaders across the world seemed shocked.  Much of the mainstream media joined in on the slander. How could Israel do that? They are hurting peace! Israel is just trying to avoid criticism, and on and on.

Israel gave the U.S. the facts behind what they were about to do before they made the designation, but Secretary Blinken denied that communication.  A team from Israel’s Foreign Ministry is on its way to D.C. to discuss that claim in person.

Look, if instead of looking to slander Israel, those politicians, the U.N., and leftist ‘reporters’ did some research they would know that those six NGOs are associated with the murderous terrorists from the Popular Front For The Liberation Of Palestine (PFLP). But they couldn’t do the research, slamming Israel with falsehoods is the norm for the international community—it has too many of those Jews.

NGO Monitor the go-to site posted a summary of the links between those six organizations and the PFLP that they have published in recent years, and have given permission to share it below:

The PFLP has carried out suicide bombings, shootings, and assassinations, among other terrorist activities targeting civilians, and was the first Palestinian organization to hijack airplanes in the 1960s and 1970s. In 2001, the PFLP assassinated Israeli Minister of Tourism Rechavam Ze’evi.  PFLP members took credit for the house invasion and murder of the Fogel family in 2011 and was responsible for the massacre at a synagogue in Jerusalem’s Har Nof neighborhood in 2014 where four worshipers and an Israeli police officer were murdered. The terror organization also praised its “comrades” for their role in the murder of Israeli Border Police office Hadas Malka– and wounding of four other Israelis- in a June 16, 2017 attack in Jerusalem. 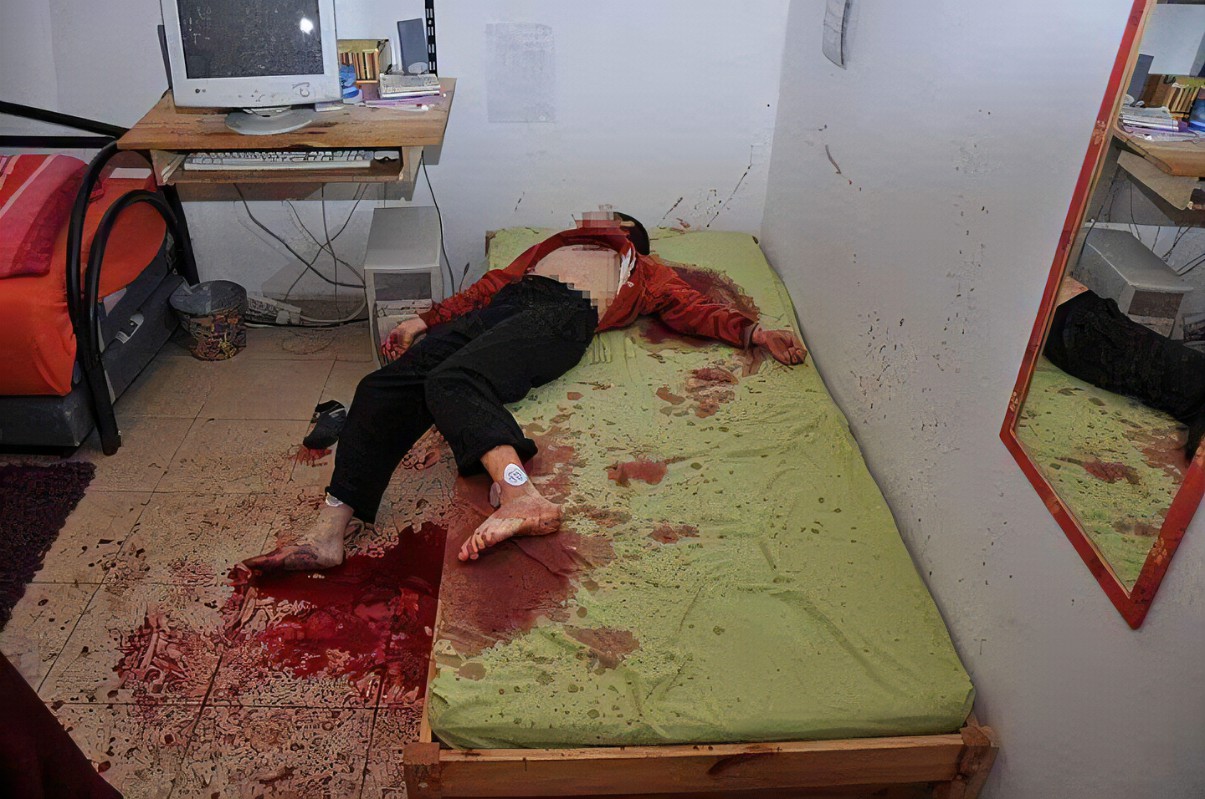 The MoD repeated the ISA (Shabak) May 2021 press release in explaining that these NGOs diverted humanitarian funds from European donors to the PFLP and recruited members into the terror group.  Relatedly, a security official told Israel’s N12 news site on October 23 that these NGOs provided a funding “lifeline” for the PFLP, employed PFLP terrorists, and that PFLP terror operatives used NGO offices for meetings.

In addition, since 2007, NGO Monitor has published numerous reports, based on open sources, documenting the close connections between these and other Palestinian NGOs and the PFLP.

These links were further highlighted following the arrest of PFLP officials charged with the August 26, 2019 bombing that murdered Israeli 17-year-old Rina Shnerb and wounded her father and brother. Samer Arbid- who served as UAWC’s accountant at the time of his 2019 arrests and as Addameer’s accountant until at least 2015 was indicted on 21 counts, including for commanding the cell that carried out the attack.

The PFLP condemned the MoD designation, with PFLP Politburo member Kayed Al-Ghoul stressing “that the Palestinian people are proud of the affiliation of any of their sons to any national faction that resists the occupation, and in this context, whoever belongs to the Popular Front is a source of great pride and honor for him.”

Similarly, the PFLP has often defended these organizations, highlighting its connection to them.  It has identified leading officials at these NGOs as PFLP members, including those accused of murdering an Israeli civilian in an August 2019 bombing.

Hours after the IDF confiscated computers and documents from DCI-P and Bisan on July 29, 2021, “The Popular Front for the Liberation of Palestine renewed its demand to confront the continuing Zionist violations against the active Palestinian civil institutions.”

In an August 26, 2019 bombing, a PFLP cell murdered Israeli 17-year-old Rina Schnerb and wounded her father and brother. On August 30, 2020, the PFLP referred to Samer Arbid as a “prisoner and commander,” and “one of the heroes of the Bubeen operation” — referring to the bombing. 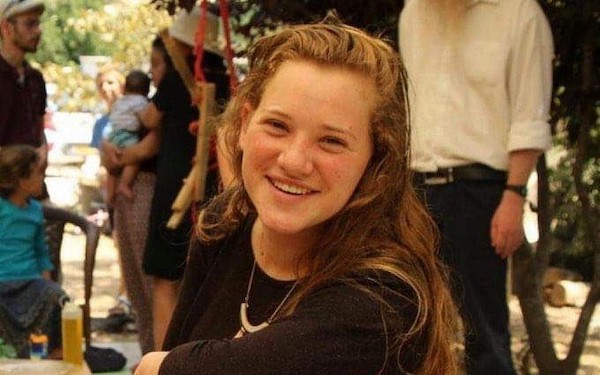 Notably, representatives from Al-Haq, UAWC, Addameer, UPWC, and Bisan participated in a May 2019 PFLP gathering in Ramallah – including Arbid and other NGO officials detained in connection to the August 2019 attack.

Until 2015, the PFLP’s English website promoted DCI-P, Addameer, and UPWC, and directed visitors to their own websites. (See below)

In August 2021, it was revealed that the EU’s anti-fraud mechanism, OLAF, launched a terror-financing investigation into EU support for Palestinian NGOs. This follows a July 2020 decision by the Dutch government to suspend funding to UAWC and launch its own investigation into UAWC terror ties. Also Additionally, in May 2020, EU Commissioner for Neighborhood and Enlargement Olivér Várhelyi stated that he had instructed the heads of the EU delegations to Israel and the West Bank/ Gaza to “look deep[ly]” into allegations that some EU funds go to terror-linked or terror-supporting NGOs, declaring that such funding “will not be tolerated.”

Screenshot of PFLP website in English, which links to DCI-P, Addameer, UPWC, and HWC websites (November 5, 2015)

As mentioned above this is a summary NGO Monitor has separate, more detailed analyses of each of the organizations. Just click on the PFLP-connected organization’s name in the sentence that follows. Defense for Children International-Palestine (DCI-P), Union of Agricultural Work Committees, Al-Haq, Addameer, Union of Palestinian Women’s Committees (UPWC), and Bisan.

I think it’s safe to assume that the Israeli government has even more information that they shared with the U.S., but haven’t released it publicly as of yet. However, from the information we have, it is clear that the six NGOs have ties to the PFLP, and as usual government officials and the mainstream media are ignoring the truth so they can slander Israel. 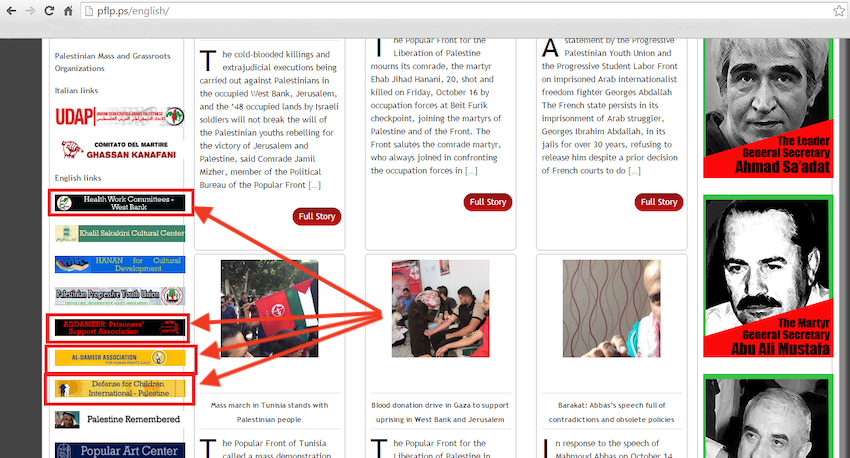 Jeff Dunetz is editor/publisher of the blog “The Lid.” He is on the board of Herut NA-the Unapologetic Zionists! and a regular on the internet TV show the Schaftlein Report

Much of this post was first seen at NGO Monitor