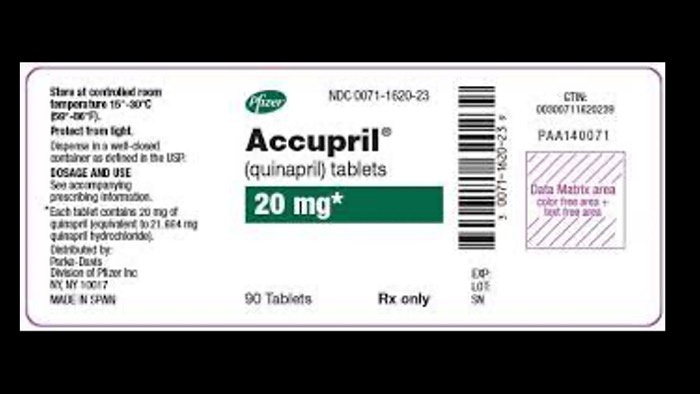 This is the second drug recall in six weeks from the pharmaceutical giant — and it’s for the same reason.

The same problem has affected another Pfizer-made drug, Accupril, also used to treat hypertension. Per the Daily Mail:

The recall comes after research found that batches of the drug contained increased levels of a cancer-causing agent, nitrosamine. It was announced on March 22 and involves five batches of pills, each containing 90 bottles.

Pfizer says those bottles may have been split into smaller prescriptions, and has urged any doctor or pharmacist who dealt with the shipments in question to contact them immediately.

The drugs were distributed in the United States and Puerto Rico between December 2019 and April 2022, a Pfizer news release said…

…Patients with the affected product should contact Sedgwick at 888-345-0481 (Mon.-Fri. 8:00 am – 5:00 pm ET) for instructions on how to return their product and obtain reimbursement for their cost.

According to Clinical Calculator, a website committed to evidence-based medicine, there were 1.3 million active Accupril prescriptions in the United States in 2019.

In the press release about Pfizer’s voluntary recall released by the FDA, the agency says that nitrosamines are quite common in everything from cured and grilled meats, dairy products, and vegetables to water. Everyone has some level of exposure, but the cancer risk is in people who have been exposed to elevated levels for extended periods of time.

The bottles come with 90 pills and are prescribed in 10mg, 20mg and 40mg increments. The number of pills per bottle can be broken down into smaller amounts.

In Canada, Pfizer had already announced a similar recall after finding the same impurity to be above acceptable levels.

A statement from the Canadian government said that people ingesting nitrosamine at the acceptable level or below for 70 years are ‘not expected to have an increased risk of cancer.’

Pfizer also notes that there are no reports of specific incidents related to the drug and are stressing that there is no immediate risk to patients already taking the medicine.

While many have praised Pfizer for the rapid development of the vaccine, others have been highly critical of the Big Pharma company for its resistance to making any initial trial data public.

As a reminder, Pfizer had to pay out $2.3 billion in 2009 — one of the largest criminal settlements in history — for fraudulent marketing of one of their products.’

It’s not a bad thing to be skeptical of Big Pharma.