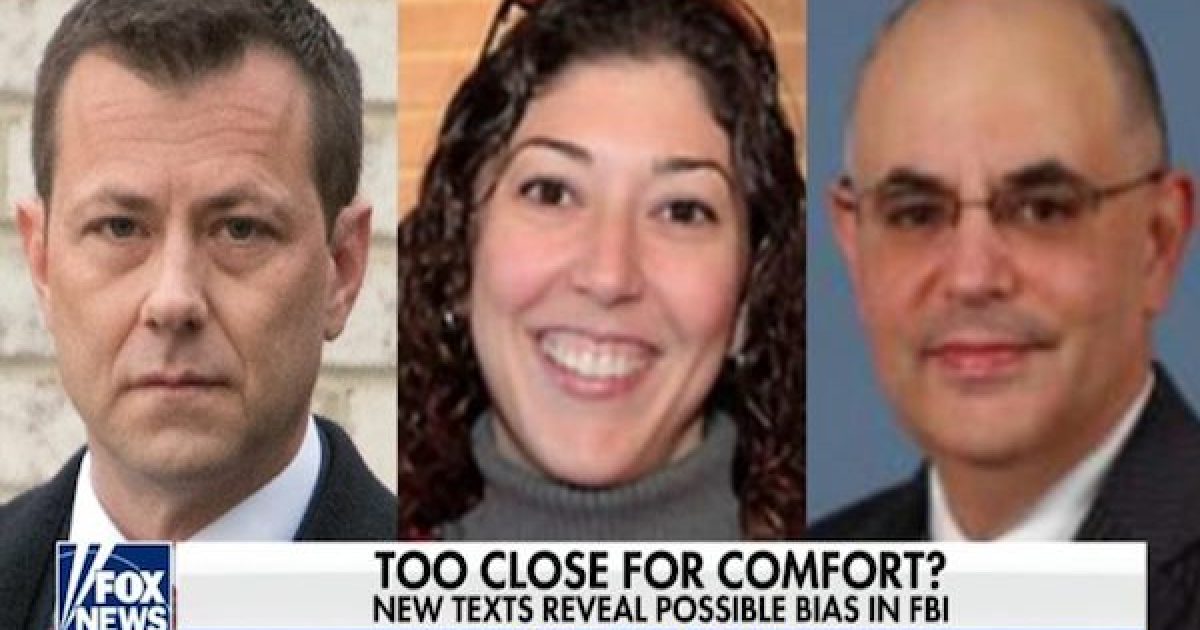 Bombshell gets bigger.  Sean Hannity had additional material from the Strzok-Page text exchanges depicted on his broadcast on Friday evening (16 March).  There are screen caps added below to flesh out the text sequence, which is now even more damning.  Peter Strzok and Lisa Page actually discuss the basis for a Contreras recusal, apparently in anticipation of a FISA case, in particular.

See, in this post, the reference to the Obama task force timeline regarding “Russia-Trump” — the odds would seem to be low that on 25 July 2016, Strzok and Page were discussing any other subject of a FISA case or recusal.  Strzok isn’t speaking in general terms; he’s talking about something he is working on, or expects to be working on.  It’s not the Clinton case — that didn’t involve FISA applications.  It basically has to be Russia-Trump.  This is an extremely informative sequence, in that it indicates Strzok was already, on 25 July, seeing a possible need for Contreras to have to recuse himself on a FISA matter due to his relationship with Strzok.

The narrative that the FBI was only galvanized on that very date — 25 July — to start moving on what eventually launched the FISA surveillance of Carter Page would seem to be crumbling before our eyes. – J.E.

The Federalist has obtained unreleased text messages between FBI employees Peter Strzok and Lisa Page that show both of them had personal acquaintance with U.S. District Judge Rudolph Contreras – and Strzok was scheming as early as July 2016 to get together with Contreras, “without arousing suspicion that they were colluding.”

Contreras was the judge presiding in the Michael Flynn perjury case, brought by special counsel Robert Mueller, and based at least in part on statements Flynn made to Peter Strzok in what now appears to have been an ambush interview on 24 January 2017, days after Donald Trump took office.

Contreras is also one of the 11 judges on the FISA court.  That detail has prompted much speculation as to why Contreras was recused from the Flynn case six days after accepting a guilty plea from Flynn on 1 December 2017.

It now appears that a different interval is the explanatory one.  As The Federalist recounts, it was on 2 December 2017 that the New York Times reported on the Strzok-Page affair, their lengthy text message correspondence, and the reason for their removal from the Mueller team a few months earlier.  On 5 December, Senator Charles Grassley (R-IA) requested Peter Strzok’s text message archive from FBI Director Christopher Wray, along with any notes from the 24 January Flynn interview

Then, on 7 December 2017, Judge Contreras was abruptly recused, and the Flynn case reassigned to Judge Emmet Sullivan.

The most notable feature of this newest revelation is that someone had to know at that time how the Strzok-Page texts would implicate both Strzok and Contreras.  That’s why so many of the texts have been withheld from Congress up to now.  Mollie Hemingway’s point here is key (emphasis added):

The text messages that show Page and Strzok conspiring to meet with Contreras were originally hidden from Congress. In records provided by DOJ to Congress, the exchanges referencing Contreras, and plans to meet with him under the guise of a cocktail party, were completely redacted by federal law enforcement officials. The exchanges obtained by The Federalist include information that was never turned over to Congress.

In the messages, Page and Strzok, who are rumored to have been engaged in an illicit romantic affair, discussed Strzok’s personal friendship with Contreras and how to leverage that relationship in ongoing counterintelligence matters.

“Rudy is on the [Foreign Intelligence Surveillance Court]!” Page excitedly texted Strzok on July 25, 2016. “Did you know that? Just appointed two months ago.”

“I did,” Strzok responded. “I need to get together with him.”

“[He] said he’d gotten on a month or two ago at a graduation party we were both at.”

Contreras was appointed to the top surveillance court on May 19, 2016, federal records show.

The pair even schemed about how to set up a cocktail or dinner party just so Contreras, Strzok, and Page could speak without arousing suspicion that they were colluding. Strzok expressed concern that a one-on-one meeting between the two men might require Contreras’ recusal from matters in which Strzok was involved.

“[REDACTED] suggested a social setting with others would probably be better than a one on one meeting,” Strzok told Page. “I’m sorry, I’m just going to have to invite you to that cocktail party.”

“Have to come up with some other work people cover for action,” Strzok added.

Here are the texts with additional, interstitial material.

It bears repeating that 25 July 2016 was the critical period when everything was happening to launch Obama’s Russia-Trump task force, which was officially assembled the first week of August 2016.  (See here as well.)

The Democratic Convention in Philadelphia began on 25 July, and it was reportedly right on or about that date that the FBI got wind of George Papadopoulos’ excellent adventure with a Russian recruiter (from March 2016), and John Brennan learned of the still-super-secret intelligence that drove him to brief Obama and create his analyst group of “several dozens” from the CIA, NSA, and FBI.

How weird is that, right?

Contreras and Strzok might have known each other from Contreras’ time in the civil division of the DOJ’s U.S. District of D.C., where he worked from 2006 until his appointment to the federal bench in 2011.  (Contreras had been working in the Justice Department, and Strzok at the FBI, since the 1990s, so their paths may have crossed earlier as well.)

Contreras was the chief of the D.C. District’s civil division, a position from which D.C. District judges have often been appointed in recent years.  That was probably how he knew FBI staff attorney Lisa Page, whose mention of him in the text exchange makes clear that she seemed to know him personally as well.

Contreras was involved in one other issue of special relevance to Strzok’s workload.  Contreras was the D.C. District Court judge who issued rulings in the Hillary Clinton email case, requiring the State Department to release the emails, and giving State a “rolling” timetable for the releases.

As the lead counterintelligence expert assigned to vet the Hillary email issue on national security grounds, Strzok had to be directly involved in the work product for that release order.  It was State’s job to process the emails and meet the judge’s requirements, but the FBI, investigating Hillary’s handling of them, had to have full cognizance of the material involved.  I make this point to clarify that Strzok’s path had to cross with Contreras’ during the period of the Hillary investigation.  These were people who knew each other and were also directly aware of the big cases they were working in common.

(Note that this last paragraph addresses Contreras’ potential knowledge of what Strzok was doing on the Clinton case.  The texts we’ve just seen on Friday are about Contreras’ role on the FISA court, and whatever Strzok was doing in connection with that.  When Strzok says “Generally he [Contreras] does know what I do. Not the level or scope or area,” he’s saying that in the context of a reference to FISA matters. — J.E.)

There is no identifiable basis right now for making nefarious assumptions about Judge Contreras’ role in these cases: Clinton’s emails, the Flynn case, or any potential involvement in the FISA court decisions on the Carter Page surveillance.

But that’s an awful lot of coincidence, to have no meaning.  Even if it were only exploited as coincidence, rather than managed into “coincidence,” the determination to avoid disclosing the Strzok-Page emails, in light of it, looks…bad.