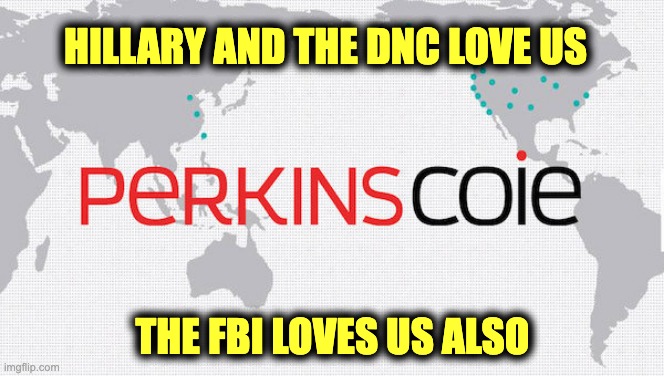 The Perkins Coie law office at the center of the Russiagate scandal has an FBI workspace complete with a computer terminal to access FBI databases. This is a huge piece of information – they’ve had that workspace present in the office since 2012! Never mind that FBI databases are RESTRICTED, and only certain personnel are supposed to be allowed to access them.

The Perkins Coie law firm represents Democrats. According to a whistleblower who contacted Rep Jim Jordan and Rep Matt Gaetz, the DNC and Clinton legal group had access to FBI databases. And the person operating out of that office for at least the last 12 months was none other than recently acquitted Michael Sussman.

In response to a letter sent by Reps Matt Gaetz (R-Fla.) and Jim Jordan (R-Ohio), Perkins Coie, the legal arm of the Democrat party, admitted this week that “the FBI has maintained a secure work environment within Perkins Coie offices” since 2012.https://t.co/J9EMtfwaBE

Per the Conservative Tree Hous (CTH)

CTH has long claimed there was some kind of direct portal link between the Clinton campaign team and the FBI databases.  There were too many trails of extracted non-minimized research evidence in the hands of the Clinton team that CTH could not trace to a transferring FBI official.  If Perkins Coie operated a portal in their office that allowed them to conduct search queries of American citizens, then everything would make sense.  That access portal is exactly what is being claimed and admitted in this report.

The start date of 2012 is important for several reasons, not the least of which is FISA presiding Judge Rosemary Collyer criticizing the scale and scope of unlawful FBI database access going back to exactly 2012.  Keep in mind a FISA-702 search, is simply an unlawful FBI warrantless electronic search of an American (“702” represents the American citizen) into the central database -maintained by the NSA- that contains all electronic data and communication…

Summary: The FISA court identified and quantified tens-of-thousands of search queries of the NSA/FBI database using the FISA-702(16)(17) system. The database was repeatedly used by persons with contractor access who unlawfully searched and extracted the raw results without redacting the information and shared it with an unknown number of entities.

It appears that the Perkins Coie law office entered into a memorandum of understanding with the FBI, calling themselves “contractors” to the Federal Government. Instead, they were conducting illegal searches to further the Democrat party’s agenda. Unscrupulous and unethical are only two adjectives to describe this act of political espionage. All FBI leadership should have said NO at the beginning, but they’re in the pockets of Democrats and have been for decades. Christopher Wray should have stopped it immediately when he got into the Director’s chair. But he didn’t – the workspace is still in operation, according to the whistleblower.

Unauthorized access for private purposes to even an NCIC terminal in a police department or other law enforcement agency can get a person fired and the agency’s access cut off. It’s a serious violation, but apparently, Democrats can do whatever they want. Will anything happen to this “workspace” in the middle of a private law firm or those who illegally accessed it?

The Democrat party shouldn’t have this special access, this special portal to the FBI, especially knowing what we do now—that they were often trying to take this opposition research, and use that for law enforcement counterintelligence purposes

BREAKING: In response to a letter sent by Rep. Matt Gaetz and @Jim_Jordan, Perkins Coie, the legal arm of the DNC and Hillary Clinton, admits they have been operating an FBI workspace in their Washington, D.C. office since 2012. pic.twitter.com/D2k19wQ2n5

So how can the American people flush out this cesspool of evil? We can start at the ballot box but failing that, there may only be one answer. And nobody will like that one.