PELOSI: ‘Just Generally, I Usually Always Cast My Vote For A Woman. I Just Do.’ (VIDEO) 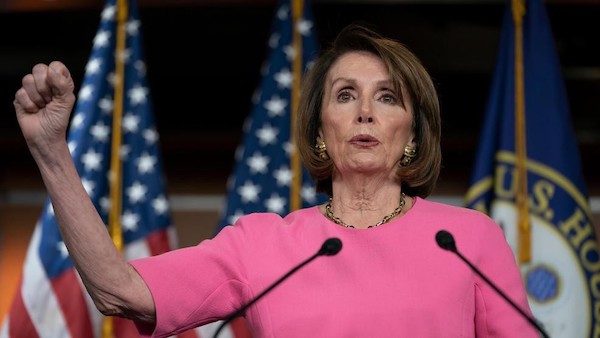 Can someone translate that word salad from incoherent Leftist to rational English? Speaker Nancy Pelosi(D-CA) has never missed an opportunity to use an -ism or -phobia as a political cudgel. Her favorite by far seems to be claiming that women are treated as second-class citizens in the United States. Pelosi vote for woman

Yeah, I know that that’s completely insane, but it’s a thing that she does.

It’s quite the take for the first female Speaker of the House who is in her second stint in that position.

When she had her weekly press conference, she addressed Senator Elizabeth Warren(D-MA) dropping out of the Democratic primary race and said that there was “a certain element of misogyny that is there.”

“I so wish that we had a woman president of the United States,” Pelosi said, reacting to Warren’s exit in a Thursday press conference. “I think the American people are ready for it. [But] it’s a competition. You run and make your pitch, and people respond to it.”

“I do think there is a certain element of misogyny that is there,” Pelosi said, explaining why the two leading candidates in the Democratic primary are men. “Some of it isn’t really mean-spirited. It just isn’t their experience. Many of them will tell you they had a strong mom, they have strong sisters, they have strong daughters, but they have their own insecurities, I guess you would say.”

So, riddle me this, Nancy, how do you reconcile that there was misogyny in not selecting Pocahontas Warren as the Democratic nominee. Still, as we are constantly reminded, it was just four years ago Hillary won the popular vote? Is it still misogyny if she got more votes? Or is it that Democrats are sexist?

Nevermind that both of these candidates had an allergy to the truth were about as likable as the coronavirus and continuously played the woman card, which is just obnoxious in our current era.

But apparently, touting someone’s gender is The Thing To Do if you’re a leftist woman of a particular vintage.

Today, Speaker Pelosi spoke at a Women’s Summit at Northeastern University and said that she “generally… usually always” casts her vote for a woman.

Speaker Nancy Pelosi: "Just generally, I usually always cast my vote for a woman. I just do." pic.twitter.com/caeEWJ4qHE

Since there’s still another woman in the race…

…when should we expect the Speaker Pelosi endorsement of Rep. Tulsi Gabbard?

Now that that’s all sorted out…

I just have one question for you:

Please define what makes a woman a woman in 2020.

Leftists have decided to ascribe to the nonsense that is critical gender theory and has basically disavowed that biological sex is a real thing, that anyone can claim that they are a woman by merely saying so, there is such a thing as a “female penis,” and that “men” can have menstrual cycles and give birth to babies.

If that’s all true, then what makes a woman a woman?

This is the thing that leftists want — to be able to identify women as a protected class, but no longer define what woman means. It’s self-defeating.

But don’t worry… Nancy “generally… usually always” votes for a woman — whatever that means.