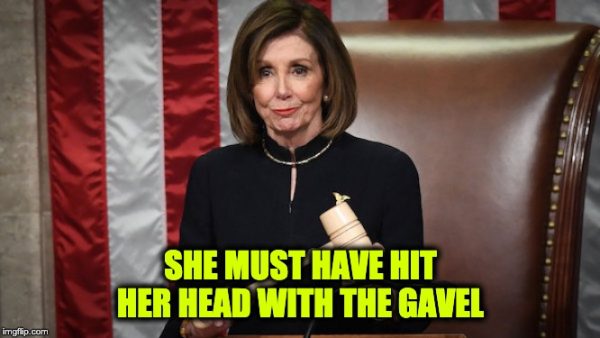 Last week it was “he’ll be impeached forever.” But facing the prospect of he’ll be acquitted forever, Speaker of the House, Nancy Pelosi, D-CA., hit peak “stupid.” On Thursday, she put forward the notion that President Trump really won’t be acquitted if the Senate votes to acquit him.

” Do you think President Trump will be chastened…or will he be emboldened because the Senate will have acquitted him?” a reporter asked.  Her answer was, to put it mildly, curious.

.@SpeakerPelosi: If the Senate votes to aquit Pres. Trump, he “will not be acquitted” pic.twitter.com/3ovJZA1NrX

The reaction was pretty much what you’d expect:

She says you do not have a trial if you do not have witnesses and documents? She just described the result from the House resolutions. The entire reason there is a squabble in the Senate over calling witnesses is because the House failed to do its job.

So, just to recap:

The House’s impeachment efforts couldn’t wait to adjudicate witness subpoenas, but they could stand to wait an extra three weeks after the vote, and now an acquittal won’t be legitimate if the Senate doesn’t supplement the House’s work.

17 House wittinesses (18 if you count the ICIG’s exculpatory testimony Schiff is refusing to hand over.)… Also, I’m old enough to remember (a few days ago) Nadler and his cohorts delivered carts of relevant documents to the Senate. It’s over… She failed! pic.twitter.com/EXLY1eyUFE

Sorry Nancy, despite your nonsensical gobbledygook, when President Trump is acquitted —he will be acquitted.

According to ABC News, Senate Majority Leader Mitch McConnell, R-Ky., indicated he has the votes to block witnesses, which means this could be over in time for the Super Bowl.

Multiple Republicans tell ABC News they hope to move quickly to a vote to acquit the president as early as Saturday, ahead of his State of the Union address on Tuesday.

ABC News’ Trish Turner caught up with McConnell as he arrived at the Capitol Thursday morning. Asked if he has the votes he needs to win the day Friday on witnesses, he responded, “We’ll see what tomorrow brings.” Then, when asked if he felt confident about the vote, he turned his head and with a sly grin and said, “I always do.”

The sight of Nancy Pelosi’s fake smile sitting behind the newly acquitted President Trump as he delivers the State of the Union Address will be magnificent. I hope they pan out to capture Adam Schiff, Jerrold Nadler, and Chuck Schumer enjoying the President’s speech.