If Pelosi Thought D.C. Protests Were ‘Peaceful’ Why Did She Need So Many Security Guards? (Video) 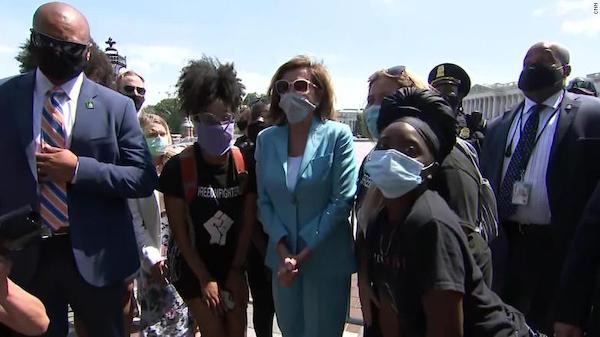 Speaker Nancy Pelosi(D-CA) has been denouncing President Trump’s “photo ops” but has simultaneously been making several of her own. Pelosi D.C. protests

Under the heading “If Democrats Didn’t Have Double Standards They Wouldn’t Have Standards At All”, here is Speaker Nancy Pelosi on Joe Scarborough’s show very, very upset about President Trump visiting St. John’s Episcopal Church after it sustained damage during rioting on Sunday night.

Can you believe the nerve of Pelosi to say says that we need to “be consistent” with the Bible? Really, Nancy? I guess she missed the time that the Pope compared abortion to hiring a hitman.

Also, Pelosi says that her daughter–I’m sure an absolute paragon of integrity just like her mother–said that the police fired on “peaceful protesters” so that the President could have a “photo op.”

That was debunked as a lie by the authorities.

But hey, it’s not like you need the authorities anyway, eh, Nancy? She’s siding with Black Lives Matter activists who are literally calling for police departments to be defunded.

We call for an END to the systemic racism that allows this culture of corruption to go unchecked and our lives to be taken. See the Demands. Sign the Petition. #DefundThePolice #blacklivesmatter https://t.co/xGULtImAOY

But we all know what the Democrats believe—if it doesn’t fit their narrative—just ignore it.

All photo ops are bad in an election year…unless they’re done by Democrats.

House Speaker Nancy Pelosi (D-CA) on Wednesday became the latest Democrat lawmaker to attended a protest against the death of George Floyd, walking through a demonstration outside the Capitol in Washington, D.C.

Flanked by members of her staff and security guards, a masked Pelosi made her way through a crowd of protesters on the Capitol’s east front.

Watch as Speaker Pelosi walks through the throngs of protesters on Capitol Hill while she’s surrounded by staffers and security guards.

Seems a bit weird, no?

Perhaps she’s still shaken up after her last foray into the public sphere and was surrounded by illegal aliens crowding and shouting at her.—Illegals Show Up At Pelosi Speech… It Did NOT Go Well For Her

And if you think she was there just showing her solidarity, here’s the photo op:

Charlie Kirk of Turning Point USA noted the something similar:

Let me get this straight:

…Yet she’s walking around in massive protests?

Why are we still paying her salary if this is how she spends her time?

Public health “experts” have said that it’s more important to protest racism than to stop the spread of a virus that has killed over 100,000 people in the United States alone. We were all “sheltered in place” for months, destroying our economy, bankrupting businesses, decimating personal wealth, keeping kids out of school, unable to attend church services, had our liberties suspended indefinitely, and were unable to properly bury our dead–none of that was worthy of ending the lockdowns. If you suggested it, you were accused of “wanting to kill grandma.” But protests against the left’s (incorrect) narrative of systemic, racist police brutality? Well, heck, let’s get on out there and protest! Because that is a worthy cause.